On April 29, 1997, Sri Lanka’s Aravinda de Silva became the first man to score two unbeaten hundreds in a Test — a record he alone holds till date. The innings didn’t result in victory for his side, but it emphasised the incredible form he was in the middle of. Karthik Parimal summarises the Test that homes de Silva’s heroics. On April 29, 1997, Sri Lanka’s Aravinda de Silva became the first man to score two unbeaten hundreds in a Test — a record he alone holds till date. The innings didn’t result in victory for his side, but it emphasised the incredible form he was in the middle of. Karthik Parimal summarises the Test that homes de Silva’s heroics.

From the beginning of 1996 to mid-1997, Aravinda de Silva instilled tremendous fear in almost every opposition with his wizardly willow. In Tests, he accumulated 674 runs from nine games at an n average of 48.14, and 1936 at 50.94 in One-Day Internationals (ODI). Such was his brilliance that he became the mainstay in a team that was already crammed with stalwarts. He appeared immune to spinners and seamers of all genres, and his prodigious handling of swing provided further proof of his increasing adeptness. In the summer of 1997, on a hot day at the Sinhalese Sports Club Ground in Colombo, de Silva mesmerised the cricketing world yet again.

Pakistan carried a depleted bowling unit for this series, presenting opportunities to fringe bowlers Mohammed Zahid and Shahid Nazir in place of Wasim Akram and Waqar Younis. On the other hand, Sri Lanka remained uncompromising, fielding a first-rate line-up, although Muttiah Muralitharan was left out for the second Test. The first game ended in a turgid draw, despite Saqlain Mushtaq and Mushtaq Ahmed taking 15 of Sri Lanka’s 18 wickets between them. For the visitors to pinch a victory in the next, it was imperative for the duo to come good yet again.

Well aware of Pakistan’s frailty in the bowling department, Arjuna Ranatunga won the toss and chose to bat first. Sanath Jayasuriya, characteristically, provided a reasonable start, scoring 72 of the team’s 95 runs in just over two hours. Then, a mini-collapse ensued, leaving de Silva to arrest the slide. He altered the tempo of his approach incredibly, consolidating and attacking according to the situation. None of the other batsmen could manage to drop anchor at one end — on an average, a wicket fell for every 20 runs during the first innings — yet de Silva went about his task sans any commotion.

For over six-and-a-half hours, he faced 208 balls, rammed 19 boundaries and finished with an unbeaten 138. This was his 10th century in Tests and, albeit it was essayed against an attack that was without the services of Wasim and Waqar, it gave a fine account of his grit. Sri Lanka could muster 331, a total, although not threatening, formidable enough to pester the Pakistanis. Sajeewa de Silva responded with a five-wicket haul that halted the visitors’ progress at 292. As if conceding a lead of 39 wasn’t worrisome enough, the Pakistanis then lost Zahid and Nazir, their opening bowlers, to injuries.

This led to Saleem Malik and Ijaz Ahmed, a strange bowling combination, sharing the new-ball at the commencement of Sri Lanka’s second innings. The move failed to pay rich dividends, understandably, as openers Jayasuriya and Russell Arnold compiled a 157-run partnership, with Jayasuriya scripting a slow-paced 113.

Once they fell, de Silva and Ranatunga took over the mantle of bludgeoning the hapless attack. The former scored at a much quicker pace this time, aware of an imminent declaration; time was needed to bowl Pakistan out in the fourth innings. Dropped by Saleem Elahi on 80, he amassed another hundred, collecting 11 fours and a six in the process. Nevertheless, Ranatunga, out for 66 and in the dressing room, delayed the declaration for more than an hour in order to let his celebrated teammate reach the coveted milestone. He drew heavy flak for his decision. In Murali’s absence, taking 10 wickets could prove to be arduous.

“Ranatunga’s critics later argued that he should have declared at tea, denying De Silva his landmark in order to gain time to bowl Pakistan out. As it was, after Vaas had removed the openers, the touring batsmen combined sense and defiance for the rest of the match,”Wisden noted.

Sri Lanka’s second innings concluded at 386 for four, with de Silva finishing on an unbeaten 103. This made him the first man to score two unbeaten hundreds in a Test — a record he alone holds till date.
Powered by a breezy 155 off Saleem Malik’s blade, Pakistan comfortably saw out the final day, reaching 285 for five by stumps. No team could draw first blood in the series and, apart from de Silva’s heroics, there were hardly any moments that stole the limelight. For de Silva, though, it appeared to be a never-ending purple patch, as the two centuries here were second and third in the list of six consecutive hundreds he notched at home. Phil Tufnell: Maverick on and off field 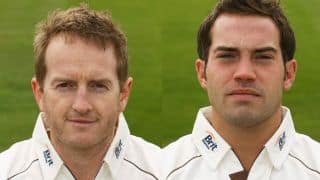