On July 25, 1997, one dropped chance in an Ashes Test at Headingley was to go on and effect not only the match and series outcome, but also the career of a player. Jaideep Vaidya goes through the happenings of the day.

On July 25, 1997, one dropped chance in an Ashes Test at Headingley was to go on and effect not only the match and series outcome, but also the career of a player. Jaideep Vaidya goes through the happenings of the day.

It was an odd day of on-field and off-field action. Being the Saturday of Test match cricket at Headingley, it was the traditional Fancy Dress Day in the stands. The crowds in the usually raucous Western Terrace were having a gala time. Fun-loving Yorkshiremen love nothing better than dressing up and had turned up in the most colourful and distinctive avatar they could conceive.

However, it all went awry when a pantomime cow decided to graze along the boundary. Some over-enthusiastic security guards charged over and crash-tackled the poor ‘creature’ to the ground. The rear end of the cow, that went by the name of Branco Risek, needed treatment on ‘its’ back and considered legal options. Meanwhile, a carrot, that preferred to be called Brian Cheesman and who also wandered around universities delivering lectures in ‘its’ free time, was frog-marched out of the ground for alleged drunken and abusive behaviour — a charge that ‘it’ vehemently denied.

However, perhaps not even Risek and Cheesman were as hurt as a certain Mike Smith at the end of the day. Picked from Gloucestershire for his Test debut, Smith would go down to become one of the most unfortunate characters associated with the game.

The two teams were coming into the fourth Test at Headingley with the six-match series drawn at 1-1. Australian skipper Mark Taylor won his fourth consecutive toss and elected to bowl first on a green pitch and an overcast sky above, hoping his bowlers would make the best out of the conditions. However, the England batsmen did well in the 36 overs that the rains permitted to be bowled on the first day. The hosts took stumps at 106 for three with captain Mike Atherton and nightwatchman Dean Headley at the crease. So far, so good.

On Day Two, Saturday, Headley started off with a couple of cracking boundaries. However, this was when a 22-year-old Jason Gillespie decided to tear through the English line-up. Headley didn’t last long in the morning, before Gillespie caught Atherton at long leg off the bowling of Glenn McGrath. Gillespie then bowled over the remaining five brittle and helpless English pins in just 18 overs, as England’s innings ended at 172 all-out. Gillespie finished with career-best figures of seven for 37 after a couple of deadly spells of fast swing bowling.

Australia did no better in their first 18 overs, and were tottering at 50 for four, after Headley dismissed Steve Waugh for four runs. The tourists had lost all their senior batsmen and at the crease were two youngsters playing in their first-ever Ashes series: Matthew Elliott, 25, and Ricky Ponting, 22. It could have well been 50 for five had Elliott, batting on 29, not experienced a stroke of luck that would go on to change his fortunes and that of his team and the series itself.

Smith ran in to bowl is left-arm pace, bounced and cramped Elliott for room and got him to edge straight towards Graham Thorpe stationed at first slip. It was a regulation catch — a dolly. The ball lobbed towards Thorpe’s face; he thrust his hands upwards in front of his face to take it, but the ball just bounced off his palms and went over his head before dropping to the ground. Thorpe could not believe it, so couldn’t Elliott, and most importantly Smith, who had missed out on his first Test wicket.

Elliott would go on to make England pay for their lapse. What should have been a scoreless partnership went on to be unbeaten through the day as Australia reached stumps at 258 for four, with Elliott scoring his second century of the series and his career, and Ponting ending on 86 not out. The next day, Ponting reached his ton as the duo batted on. Elliott went on to occupy the crease for seven and a half hours and faced 351 balls, hitting three sixes and 23 fours, before being bowled one short of a brilliant double century, via a swinging yorker from Darren Gough. 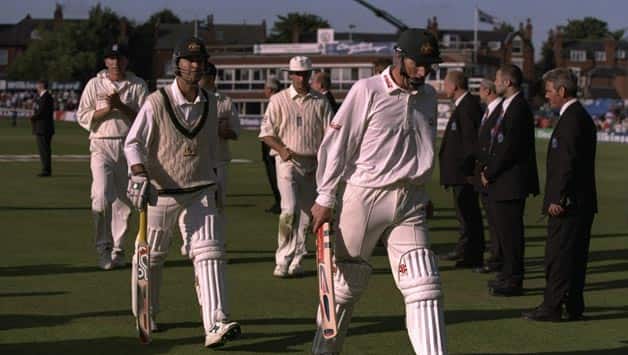 Ponting’s 127, on the other hand, had come on his Ashes debut and was one that epitomised the occasion. The 22-year-old had harshly been omitted for the previous eight Tests and had been itching for a chance for seven months. He hit 16 fours and a six, displaying what would go on to be his trademark pulls and drives with flair. Together, Elliott and Ponting added 268 for the fifth wicket in 263 minutes, and Elliott also shared half-century partnerships with Ian Healy and Paul Reiffel.

From 50 for four, and what should have been 50 for five, Australia piled on 501 for nine, before declaring. They went on to win by an innings and took a 2-1 lead in the series. As for Smith, he ended up wicketless in the match and never played a Test match again. Australia also won the next Test at Nottingham, before England pulled one back to end the series 3-2 in the visitors’ favour. Gilbert Jessop and the centuries in each innings – both before lunch