Ranji had posed in Paris for an American sculptor named Herbert Haseltine.

KS Ranjitsinhji once posed for an American sculptor in Paris, and even had a thoroughbred shipped from India so that he could be depicted on horseback. Arunabha Sengupta recounts how his vanity resulted in the death of an excellent stallion.

Much of Jamnagar reminds one of Brighton. There is the same mix of theatrical elegance, palatial hotels, somewhat contrived Orientalism.

It does make sense. For years, Kumar Shri Ranjitsinhji had lived in Brighton, recovering from asthma attacks in the waterfront hotels. He had the atmosphere etched in his mind, the Georgian elegance, the fascinating mixture of Indo-European architecture.

Jamnagar was built according to his specifications and, by all evidence, his nostalgia. Ranjitsinhji was never very happy in India. He had become too anglicised in his ways and tastes. There were illnesses, escapes to England, lavish entertainment of British guests and resumptions of his First-Class career.

Here were also affairs of the heart as he pined away for a British lady the two could not marry due to the complications that mixed-race marriage would bring into both British and Rajput circles.

He perhaps tried to recreate the Britain of his youth, of his happy times when he scored mountains of runs with his magical willow at Hove.

Overlooking Lakhota Lake, there stands a huge statue of Ranji. The Kumar is dressed as per the demands of his throne and pedigree, the turban on his head and the body wrapped in a floor-length cape, a red garland around his shoulders. The entire statue is gold plated completed after his death. Perhaps it is the only monument in this Brighton-remade Jamnagar that looks grotesquely out of place.

Ranji had posed in Paris for an American sculptor named Herbert Haseltine. He had even thought of having himself immortalised on horseback. To lend authenticity to the work and to satisfy his whims he had even had a thoroughbred Kathi horse, with distinctive curled ears, shipped from India.

Haseltine was fascinated by the Indian thoroughbred. With the license of artistic idiosyncrasy, he insisted on entertaining the stallion for tea much to the merriment of his friends.

However, the story has a dismal ending. On the voyage back to India, the horse broke his knees by colliding against the container-box. The noble had to be put down on reaching the shores an excellent animal sacrificed by the princely vanity of the great cricketer of yore.

The equestrian sculpture was never completed. 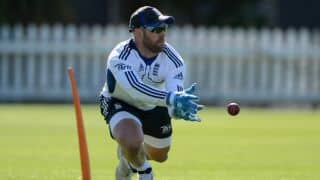 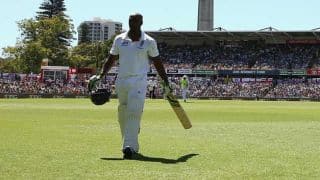