H Natarajan goes back 19 years to rewind one of the greatest victories in One-Day International history inspired by Sachin Tendulkar – the bowler! 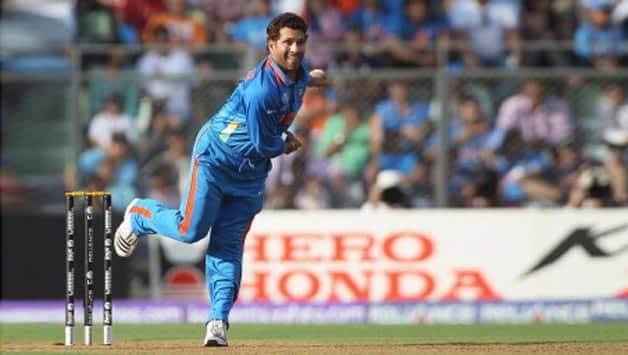 H Natarajan goes back 19 years to rewind one of the greatest victories in One-Day International history inspired by Sachin Tendulkar – the bowler!

It had been very stressful times for a certain cricket journalist in Mumbai. For months together he left for work with the gnawing feeling that when he returned home his once fit father, hacked now like a banyan tree by fate, would have breathed his last in his death bed.

November 24, 1993 was a different day. The journalist had a rare off day and he had decided to rest at home his weary body. The Hero Cup semi-final between India and South Africa was being telecast and he had watched with regret India fold up for 195 batting first – an innings which was largely boosted by skipper Mohammad Azharuddin’s knock of 90. Manoj Prabhakar, Vinod Kambli and Ajay Jadeja were gone by the time the score was 18. And with the score on 53, Sachin Tendulkar also fell. Pravin Amre filled in the breach and arrested the slide by adding 95 for the fifth wicket with Azhar. But once Amre fell for 48, there was very little support in an innings where eight Indian batsmen fell to single digit scores.

South Africa were the clear favourites at this point and still were when Javagal Srinath gave India an early breakthrough when he had Kepler Wessels leg-before with the score on 10. Andrew Hudson, Wessels’s opening partner, however stood firm. But except for Brian McMillan, none of the South African batsmen stayed long enough to stitch a meaningful partnership with Hudson. South Africa were gasping for breath when Richard Snell was stumped by Vijay Yadav off Anil Kumble with the score on 145. The balance had swung clearly in India’s favour.

Meanwhile, in another part of the country, the journalist’s father was also gasping for breath.

But things began to look good for South Africa when wicket-keeper Dave Richardson added 44 priceless runs with McMillan for the eighth wicket to bring his side back in the game.

When the last over began, the game had swung decisively back in South Africa’s favour. The body language of the Indian team players said it all. The frontline bowlers either seemed reluctant to bowl the final over – by this time the odds clearly favoured the batting side – or skipper Azharuddin had limited confidence in them. A long conference ensued in the middle between Azharuddin, Kapil Dev and Sachin Tendulkar. And in a move that shocked the vast expanse of Eden Gardens and millions all over the country, Tendulkar showed remarkable guts in taking the ball to bowl the final over.

Fast bowler Salil Ankola, who played that match, told CricketCountry: “I was standing in the deep and I don’t know exactly what the conference among the Indians was all about. But it seems Tendlya (Sachin Tendulkar) was keen to bowl the last over. There was lot of dew on the wicket and Tendlya is very difficult because he bowls all kinds of deliveries.”

Azhar took a huge gamble agreeing to let Tendulkar bowl the last over, when frontline bowlers like Kapil and Srinath both had two overs each left and Ankola had four.

“The match looked in South Africa’s pocket when Tendlya commenced the last over,” admitted Ankola. Most people would concur with his thoughts.

This is how Tendulkar bowled the decisive 50th over of the innings with the score 190 for eight:

Ball 1: Brian McMillan thumps to deep on the off-side and goes for a run. Non-striker Fannie de Villiers is keen to give his partner the strike and dashes back to the non-striker’s end. But there was no second run. Ankola’s powerful throw from deep cover is flat and fast, straight into wicket-keeper Vijay Yadav’s gloves when de Villiers was helpless facing McMillan at the bowler’s end. De Villiers is run out. He not only failed in his attempt to get McMillan the strike, but lost his wicket and now had last man Allan Donald at the striking end. What a blow! South Africa 191 for nine.

Ball 4: South Africa need five runs in three balls. “Tendulkar looks ice cool,” says TV commentator Henry Blofeld as he walks up to his bowling mark. Another dot ball! Donald tries to cut and misses a ball that was close to being called a wide. But Steve Bucknor does not think so. Guess the call would have been wide had Bucknor judged that delivery from Tendulkar much later in his career!

Tendulkar walks up to the bowling mark and then rushes to the middle of the wicket to have a long chat with ‘keeper Yadav. McMillan also has some words of advice for Donald. The pressure has the potential to kill people with weak hearts.

Ball 5: Five runs needed from two balls. Donald finally gets off the mark – but not much. His hoick helps the ball land in front of long-on, Anil Kumble, for a single. Importantly, he gives McMillan the strike.

Ball 6: It’s the last ball and South Africa are192 for nine — four runs to win. Blofeld points out, if South Africa don’t lose a wicket, they need just three to win because of losing fewer wickets. Tendulkar is furiously rearranging the field.

As Tendulkar said, “Just before the last ball was to be bowled, wicket-keeper Vijay Yadav was asked to go back and be on the 30-yard circle to intercept an inside edge, should it happen.” And that’s exactly what happened! McMillan swung and could only manage an inner edge, which was intercepted by Yadav on the 30-yard circle. South Africa could sneak in just a single. India scripted one of the most sensational wins in ODI history to move into the final of the Hero Cup! Eden erupted, the nation erupted. India had survived near death. They had every reason to feel jubilant.

Despite the Indian victory, there was no joy for the journalist. The TV had long been switched off in his house. He could sense that India had won from the neighbour’s celebrations and from the commentators’ voice from TV sets wafting into his house from the neighbouring homes. Sitting next to the now cold, lifeless body was the journalist, unable to savour the joys of his countrymen and the men who made it possible.

The pain of seeing my father’s breath slowly ebbing away, even while feebly nodding his head, gesturing my mother not to cry, is still fresh in my memory. It was the first time I had seen someone die in front of my helpless eyes. I had heard that a boy does not become a man till he loses his father. I realised on that cold night what it truly meant.

In a different way, Sachin Tendulkar – just 20 – became a man by bowling what was one of the greatest overs at the death. Tendulkar conquered death that night, my dad could not.

Relive the last over by Sachin Tendulkar: