When the going got tough for Bengal, veterans Ganguly and Chatterjee got going for their side.

December 31, 2004. For the first time since inception of the points system in Ranji Trophy, Bengal were up against the humiliation of relegation. Responding to a clarion call, Indian captain Sourav Ganguly decided to turn up for his domestic side. Utpal Chatterjee, the most successful bowler in the history of Bengal, came out of retirement to make one final appearance as well. Bolstered by the dual inclusion, Bengal put up an impressive show against Madhya Pradesh. Abhishek Mukherjee re-lives the day.

Things were easy for Bengal during the days of zonal first rounds. The undisputed kings of East Zone, Bengal usually claimed the Mona Mitter Memorial Trophy prior to 2002 — the one given to the winner from East Zone. All that changed with Elite and Plate Leagues: as top teams were being pitted against one another and promotion and relegation came into play, things got difficult for the bigger teams.

Both Bengal and Madhya Pradesh had terrible outings in 2004-05, having secured 4 points from 6 outings each. It was particularly bad for Bengal, who had secured 4 with a 116-run win over Karnataka in their first match (at Jadavpur University Campus Ground) but had nothing to show after that. Madhya Pradesh, on the other hand, had secured 2 apiece from their matches against Mumbai and Delhi.

With Andhra and Karnataka sitting peacefully on 6 points each, the battle to avoid relegation became a two-way contest. Though the outing was redundant for Karnataka, Rahul Dravid turned up for them against Railways, while VVS Laxman led Hyderabad against Assam.

Bengal asked the two men who could increase their chances of winning the match significantly. Sourav Ganguly — Indian captain at that time — announced he would play the match. Four days had passed since India’s tour of Bangladesh had ended.

Utpal Chatterjee, then 40, Bengal’s most successful bowler, had quit. He was fit and capable enough to rout Hyderabad with 11 for 100 the previous season. He had retired with 499 First-Class wickets and 396 Ranji Trophy wickets: the records did not matter, for he wanted to go out on his “own terms”.

But then — this was Bengal getting relegated — Bengal, that had helped them form their careers. When Rohan Gavaskar went out to toss with Amay Khurasiya on the last day of 2004, both names were on the Bengal team sheet. Rohan won the toss and amidst huge cheer from the home crowd and put Madhya Pradesh in under windy conditions.

Future star and a star grandson

It worked for a while, for in Shib Shankar Paul, Ranadeb Bose, and Ganguly, Bengal had three bowlers to exploit the conditions. Paul was nicknamed ‘Macko’ for some sort of facial resemblance with Malcolm Marshall; the name turned out to be ironic, for even medium-pace was an exaggeration for Paul.

Bose was less slow but more accurate. Two years down the line he would make it to the India squad. However, one aspect was common to the trio: they all thrived if there was a breeze. An early strike from Paul and a double-blow from Ganguly reduced Madhya Pradesh to 16 for 3 in the 12th over.

This was when Abbas Ali, grandson of Mushtaq Ali, joined 21-year old Naman Ojha at the crease. Ojha took a backseat as Abbas Ali started opening up, though Eden Gardens did not acknowledge his strokes the way she did his grandfather’s.

Rohan introduced Utpal; turn was difficult to come by on the first-day pitch, so Utpal struck to a steady line, making runs impossible to come by. Abbas Ali duly reached his hundred in 162 balls, but poor Ojha fell 4 short of a well-deserved hundred — for Utpal had struck, yet again. The 500th wicket had come, after all.

Madhya Pradesh finished the day on 272 for 4 with Abbas Ali on 135 and Nikhil Patwardhan on 12. They were firmly in control.

A day of wickets

Paul started the day on a high for Bengal when Abbas Ali hit one back to him for 145. Two further wickets saw Madhya Pradesh down to 298 for 7, but Brijesh Tomar and Sunil Dholpure dug in, frustrating Bengal. They managed to survive 37 overs, but more importantly, added a crucial 72.

Once Paul had Tomar caught-behind, however, Utpal finished things off in a matter of minutes. He finished with 41-15-81-3 on a pitch that had nothing for him. It was a test of relentless perseverance — something the veteran had never shied from in his career.

Madhya Pradesh had scored 392. Sunil Dholpure was left stranded on 49. Paul, moving the ball slow in the air, was the most successful of the seamers, returning figures of 4 for 101 (the third wicket had been his 100th in First-Class cricket), while Bose and Ganguly shared the other wickets.

Unfortunately, Bengal found themselves in trouble early on, losing Arindam Das and Deep Dasgupta to Sanjay Pandey by the fifth over. Devang Gandhi, nursing an injury, was held back, as was Ganguly: Rohan walked out to join Subhomoy Das.

The pair batted for close to an hour, but once again there was a double-blow as both men were claimed by the leg-breaks of Yogesh Golwalkar. At stumps Bengal were 70 for 4 with Ganguly on 4 and night-watchman Saurasish Lahiri on nought: dark shadows of relegation loomed in the horizon.

By the time Sunil Dholpure claimed Lahiri next morning, the score read 106 for 5. Devang eventually emerged to join Ganguly; the only batsman of note left in the pavilion was Laxmi Ratan Shukla.

Ganguly cut down on his strokeplay. Time and again he was tempted by Pandey and Sunil Dholpure outside off, but he kept leaving them. These were also conditions under which Devang had thrived: a partnership slowly started building.

Jitendra Likhar, the second leg-spinner, did not have an impact. The old ball had stopped moving. Ganguly had faced bowlers of far superior quality. Even Devang had. It was all about not throwing it away. And they did not.

It was Sunday, and when news got out that Ganguly was approaching his hundred, Kolkata flocked to the historic ground. The three figures were duly reached in 182 balls, and just when it seemed the pair would bat the day out — Ganguly was bowled by Pandey for 121, and the hundreds that were cheering every run suddenly lost their voice.

Back he walked to the pavilion, Sourav Ganguly, disgruntled despite the hundred under his belt — for the job was left unfinished. The score read 273 for 6. They needed another 120. Devang and Shukla wiped off 21 of these by stumps. When they came back, Devang was on 77 and Shukla on 9.

Vengeance of the veteran

The Madhya Pradesh fielders converged into an embrace 10 balls into the final day, for Sunil Dholpure had run through Devang’s defence. He had not added to his overnight score. They needed another 95.

Utpal, veteran of many a battle, walked out to the middle. The impossibly gritty Shukla was there — a man who could also score at brisk pace; but would Utpal be able to stay with him?

There was no way Utpal would let this opportunity go. He had not come out of retirement in vain. He hung on grimly, blocking whatever the leg-spinners tossed up his way as Shukla played his strokes at the other end.

A gust of wind blew across the ground. The few present wrapped their shawls around closely. Out came the monkey-caps. Sweaters were not going to suffice. In fact, nothing was — for the chill had a lot to do with the suspense that unfolded with every passing minute. Could the old warhorse hold fort?

Slowly, slowly the deficit came down. Eden Gardens started filling in. The tension grew. Lunch approached. Inch by inch did Bengal advance towards that 393-mark. The pair batted for 30 minutes, then another 30, then another. A desperate Khurasiya had, by then, switched to the occasional medium-pace of Devendra Bundela.

Was there a lapse of concentration? Probably — for Utpal, the man hardened by many a battle — edged one to young Ojha behind the stumps, who accepted the chance gleefully. Utpal’s 52-ball effort had yielded 15, but more importantly, Bengal needed another 52.

Will they? Won’t they?

It was down to Bose and Paul, both of whom averaged below 5 with the bat in First-Class cricket. Bose played to a simple strategy: he used his long reach, thwarting any kind of movement the bowlers obtained with a ball that had by then lost its shine. READ: Laxmi Ratan Shukla, the domestic warhorse

He faced 61 balls for his 3 before Likhar snared him, but during his 105-minute vigil Shukla had managed to take the target down to 13.

Out came Paul — as good as a walking wicket. Shukla did not panic. He merely kept on playing the balls on merit. The target came down to single digit, below 5…

Even the lemon-tea and vegetable patties vendors had forgotten business.

Time seemed to have reached a standstill.

Then, with 3 to get, Shukla pushed one off Likhar. The pair ran frantically (as fast as Paul’s feet made it, that is), and Shukla celebrated with a yell as the all-important lead was secured. Delighted, he went for the almighty slog off Golwalkar — for there was now a century to be taken — and was stumped for 81. Bengal had managed 397.

With no result possible, the rest of the match was a formality. However, there was still something left for one man. Sachin Dholpure (of no relation with Sunil) was stumped off Utpal, making him the first (and till date, only) Bengal player with 400 Ranji Trophy wickets.

Ojha (51) got his second fifty of the match before getting out to Utpal for a second time in the match. The match was called off with Madhya Pradesh at 111 for 2 the moment Bundela reached his fifty.

The veterans had made it count.

Bengal went uphill from there, reaching the final in the next two seasons. Astonishingly, they plummeted the season that followed: they came last in Elite Group B and — horror, horror — got relegated. There was no Sourav or Utpal this time. 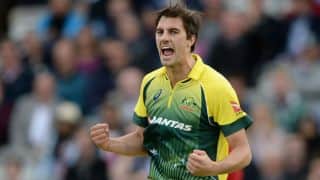