A not-too-well-known story of Sourav Ganguly, Ricky Ponting, and a toss, as quoted in Boria Majumdar s Eleven Gods and a Billion Indians.

As captain, Sourav Ganguly had made Steve Waugh wait at the toss, taken his shirt off to celebrate on the Lord s balcony, was reprimanded by Mike Denness for being unable to control his team from over-appealing, clashed with coaches Greg Chappell and John Buchanan, refused to walk after Graeme Smith claimed a catch and got into an argument with Shane Warne, and goodness knows what.

These are the controversies, but what about cheek? Boria Majumdar s Eleven Gods and a Billion Indians has an example. Majumdar has quoted Michael Clarke verbatim on this, and we will do the same.

One of Clarke s favourite anecdotes goes thus: Ganguly and Ricky Ponting were out at the toss during one of the matches in India Clarke doesn t specifically remember which one and Ponting had the coin in hand. Just as he flipped the coin, Ganguly, if Clarke is to be believed, said, Head-Tail .

Trust me, mate, that s what Ricky told me, Clarke says, cracking up. Ricky said he couldn t fathom what had happened with Dada having said Head-Tail. [And, apparently it was said at the speed of lightning.] It had taken Ricky a second or two to come to grips with the situation and by that time the coin had come down. Ganguly just picked it up and said to Ricky, We ll bat and walked off. India had won the toss and were batting. Ricky did not really know what to do or say and all he did was tell us in the dressing room exactly what happened at the toss.

With each sentence, Clarke s laughter gets louder and all of us, his auditors keeping him company, can t help but join in. While making every room for exaggeration, this story sums up Ganguly s nous as captain and explains how a very traditional Bengali bhadralok (gentleman) transformed Indian cricket forever.

My colleague Rahul Kanwal, one of India s leading journalists, once asked Ganguly if he indeed had said Head-Tail . To Rahul s surprise, Ganguly answered in the affirmative.

Footnote: Clarke is unsure of the exact match. Ganguly has won five tosses against Ponting, all of them outside India two in the 2003 World Cup and three in the 2003-04 VB Series. No, the incident didn t take place in India, but then, Clarke isn t sure of the match anyway. And anyway, had the match been played in India, Ponting would have called, so the facts corroborate. 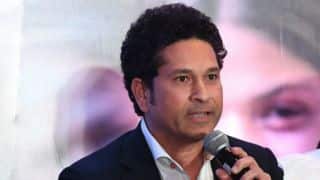