It’s Twenty20 season. And once in a while during such despairing times, cricket fans are treated to nostalgic reflections of the glory days and rants against what the game has lost in terms of dilution of its purity. 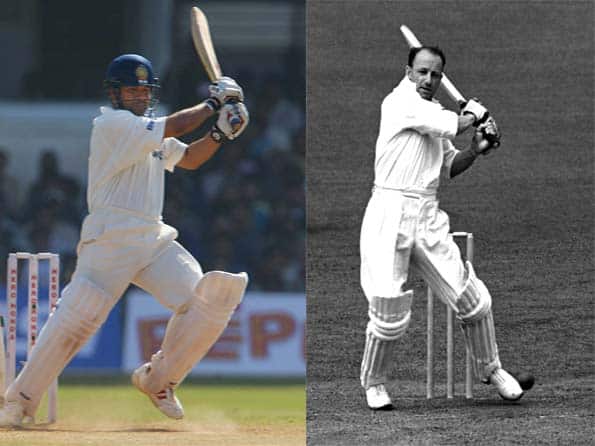 No male tennis player, other than Rod Laver, has ever won all four Grand Slams in a single year. Yet, it is considered perfectly reasonable to suggest Roger Federer as the greatest. But despite Sachin Tendulkar’s (left) mindboggling achievements, few in cricket have rated the Indian over Sir Don Bradman (right) © Getty Images

It’s Twenty20 season. And once in a while during such despairing times, cricket fans are treated to nostalgic reflections of the glory days and rants against what the game has lost in terms of dilution of its purity. I don’t know if I feel this way because I have watched more of cricket than any other sport, but cricket truly revels in the art of basking in reflected glory.

Football freaks have Lionel Messi and Cristiano Ronaldo. Tennis fans have Roger Federer and Novak Djokovic (and Rafael Nadal, and Andy Murray, before you shoot me). Basketball has LeBron James. Sprinting has Usain Bolt. While cricket still has Sir Don Bradman.  As the decades roll by, cricket still looks back at the achievements of an Australian great from the first half of the 20th century as an unqualified exemplar of genius.

In the years since, we have had Gary Sobers, Vivian Richards, Sunil Gavaskar, Brian Lara and Sachin Tendulkar. But not only does the name Bradman precede all, it is generally considered absurd to suggest the name of any other batsman as the greatest of all times.

Connoisseurs of the game will tell you this is because no batsman has dominated the game as he did and, you don’t find parallels in other sports because they couldn’t produce an icon whose feats stood the test of time for so very long.

How far these observations holds good is entirely another matter. In a purely statistical light, they do: No batsman has approached Bradman’s phenomenal batting average for a comparable number of Test innings. It is worth noting that staunch defenders of the Bradman myth are usually also people who would tell you that it’s not just about the numbers! Indeed, questions about how he would possibly have handled the famed West Indies quartet of the 70s and 80s and reverse swing at pace come to mind. Are 99 runs per match in the 1920s worth the same as 99 in the 1980s?

Part of the myth is not necessarily true either. Rod Laver’s two calendar Grand Slams stands unmatched to date. No other male tennis player has ever won all four Grand Slams in a single year, let alone twice, not in Laver’s era and not since then. Yet, it is considered perfectly reasonable to suggest Federer as the greatest. Likewise, while Pele and Diego Maradona continue arguing who as between the two was the greatest, the rest of the football world has long since moved on.

Before I expand on that, there is one more argument made in favour of permanently placing greats of yesteryear on a pedestal that I want to examine. It is often argued that a great in one era would be a great in any other. But it is very difficult to demonstrate this or to prove how this would hold true in spite of changes in the game. A great may well be a great in any other era or at the very least, a good player, but whether the extent of his greatness would remain as much as in his time does not appear to be so straightforward.  For instance, outright serve volleyers would have to develop a whole new array of skills to stay with the modern game.

That is as far as more pedantic arguments on the subject are concerned.  I would like to bring a more emotional perspective to this. Doesn’t a new generation of sports watchers deserve their own heroes? I didn’t know very much about Sunil Gavaskar when I watched Tendulkar’s glorious straight drives for the first time. I am not saying that therefore we should hail Harbhajan Singh as an amazing batsman if we cannot find a better ‘idol’, but it is perfectly legitimate to celebrate the awesomeness of AB de Villiers on the other hand.

Historical perspective of the game matters – but only up to a point. As the game evolves and players develop different skill sets, there are ultimately too many variables that we don’t have first hand knowledge of. Frank Tyson would always be the fastest bowler ever for Bradman, while Geoff Boycott would swear by Michael Holding. And we are none the wiser for it.

Does it really matter who’s the greatest? Do you find what you are watching at a stadium or on a TV screen amazing?  That’s what you need to know.

(Madan Mohan is a 27-year old chartered accountant from Mumbai. The writing bug bit him when he was eight and to date, he has not been cured of it. He loves music, cricket, tennis and cinema and writing on cricket is like the icing on the cake.  He also writes a blog if he is not feeling too lazy at http://rothrocks.wordpress.com/)