Over the last year, CSK have gone through a lot. With the Supreme Court reviewing the spot-fixing and conflict of interest cases, there was a possibility of the team facing a permanent suspension.

May 30, 2014, the Wankhede Stadium was set alight by a Virender Sehwag classic. Sehwag’s 122 from 58 balls lifted Kings XI Punjab to 226 from their 20 overs. At half-way mark Punjab may have thought that it was a job well done. Chennai Super Kings (CSK) did have the batting prowess to chase down anything. But in a high-pressure knock-out game and against a bowling attack led by Mitchell Johnson, the odds were not really in their favour.

Adding to their woes was Faf du Plessis’ dismissal to the second ball of the innings. What happened next was unbelievable. Suresh Raina possibly played one of the most destructive knocks in representative cricket. With Raina blazing guns, the chase of 227 looked like a cakewalk. A brilliant run-out from the opposition skipper George Bailey ended the Raina storm. He fell with CSK’s total on 100 at the start of the seventh over; Raina had made 87 of those runs from just 25 balls! From thereon, CSK lost the plot and the game, but Raina’s knock symbolised what the yellow brigade has done since the inception of the Indian Premier League (IPL) and the fact that they never back off from anything. Their fans love them and they have the fiercest of critics, who want them to get banned, so the cliché fits perfectly for them — Love them or hate them, you can’t just ignore them.

Over the last year, CSK have gone through a lot. With the Supreme Court reviewing the spot-fixing and conflict of interest cases, there was a possibility of the team facing a permanent suspension. With all the negative talks going on, there wasn’t a dip in the performance and the fans continued flocking. They won the Champions League 2014, where they beat the IPL champions Kolkata Knight Riders (KKR).

A report in NDTV says that the Dhoni-led CSK side are firm favourites with 22% chance of winning the 2015 IPL with defending champions KKR having 12 percent chances as per the betting odds. Does it really come as a surprise? CSK are two times champion, three times runners-up and have two finishes in top four. That’s how the first seven seasons have gone for the yellow brigade. Add two Champions League titles to it, and it’s safe to say that CSK have been the most successful IPL franchise till date.

What has really worked for them and will continue to do so?

Their core team has remained the same since inception of the tournament and in all seasons they have had Dhoni captaining the side. Even as the skipper of Indian team, Dhoni seems to be more in control when he has his spinners operating and in CSK too he replicates that. CSK has never been a pace dominant side and banked more on spin bowlers, and the conditions in Chennai have aided them for the same.

It’s safe to say that Brendon McCullum was the most destructive batsman in the recently-concluded World Cup. If McCullum replicates that form in the yellow jersey, CSK will already have the upper hand in by the time the Powerplay ends. Yes, for that McCullum will have to bat at the top. Also, Michael Hussey makes a return to the side and they already have Dwayne Smith and Faf du Plessis. With so much of firepower at the top, Dhoni will be in a happy dilemma.

Once he dons the yellow jersey, it’s a different player we are talking of. It’s a format that comes naturally to him. Raina has the most runs in history of IPL. With 3325, he is the only player to have crossed the 3000 barrier. The runs have come at an impressive average of 35.75 and a strike-rate of 142! He holds the record for most fifties and catches. Though Raina has never won the orange cap, he is the only batsman to have surpassed 400 runs in each edition of the tournament. CSK have reaped heavily from Raina’s impeccable consistency.

In Dhoni, they probably have the best leader in the shortest format. Not only his record stands out, it’s his calm demeanour that has often made a difference in crunch games. His ability to absorb pressure and deliver is exemplary. If cricketing brains like McCullum and Hussey, add to the whole, the side will surely benefit. In fact, even the likes of Ashwin, du Plessis and Dwayne Bravo, Dhoni has astute thinkers in the side. The leadership extends beyond the limits of boundary lines, as they have Stephen Fleming, one of the greatest captains in the game, as their Head Coach.

The explosive top, a finisher like Dhoni, deep batting and a potent spin attack with Ashwin, Ravindra Jadeja and Pawan Negi, CSK always had most of it sorted. However pace was a concern but with Andew Tye, Matt Henry and Kyle Abbott joining Ashish Nehra, Ishwar Pandey and Mohit Sharma, the pace battery looks charged. Also what will help them is the addition of a pace-bowling all-rounder Irfan Pathan. To strengthen their spin department and add the missing link – leg spin to the kitty, they have added Rahul Sharma to the side.

With a tiring Australian tour and a mentally and physically grueling World Cup having just ended, the only concern the key players will have is the fatigue. Other than that, the yellow brigade who will play their first match against a new-look Delhi Daredevils (DD) on Thursday at Chepauk, looks more balanced and stronger than ever. If they play to their potential, there is no reason why Dhoni can’t add silverware to his wardrobe. 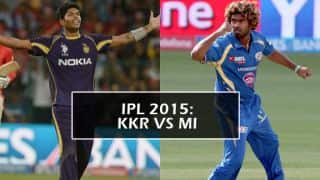