India drop down to fourth as opposed to seventh as mentioned in the ICC rankings predictor.

When rain took over at Fatullah, we at CricketCountry looked up the ICC predictor and were shocked by the drop India would suffer if the Fatullah Test against Bangladesh was washed out. But when ICC updated their rankings, it told a different story. As Editor of the site, Abhishek Mukherjee apologises to the readers and elaborates on why the error happened.

As Editor of CricketCountry, I would like to apologise to the site’s readers for misdirecting them. It had started when it had poured down in Fatullah. India were, after all, playing a weaker side, and a drawn series (one-off or otherwise) against a team down the table would result in a significant drop in points, and hence, rankings.

The drop was supposed be more pronounced if there was a 40-point difference between the two teams. Bangladesh were on 39. This also meant that a washed out series would have resulted in a substantial rise in points. Before the stage India were on 99, as were New Zealand, but India were ahead on decimals.

Thankfully for us, ICC ratings has come up with an extremely helpful feature these days: The Rankings Predictor. We reached the page and found out that India would drop to 96 — below New Zealand (99), England (97), Pakistan (97), and Sri Lanka (96 — on decimals). Bangladesh would rise to 43, which would not affect their rankings.

We were surprised by the prediction, so we decided to inform everyone about this: INDIA TO SLIDE TO 7TH IN RANKINGS IF BANGLADESH TEST IS WASHED OFF!

But then, when ICC announced the fresh rankings following the Tests at Fatullah (where India declared early, enforced follow-on, but there was simply not enough time) and Sabina Park (which Australia won comfortably), this is what it looked like.

India dropped by from 99 to 97 (not 96). This may seem to be nominal, but it actually made sure they stayed above Sri Lanka (96), and even England (97) and Pakistan (97) on decimals. Bangladesh, too, went to 41 (as opposed to 43 as the predictor said). INDIA DROPS TO 4TH IN TEST RANKINGS AFTER BANGLADESH TEST ENDS IN DRAW

We also went through the ICC rankings FAQs to find whether there was any clause for rain-affected Tests. This is what we found: “Test draws are treated in the same way as ties in ODIs, even though in character they may be more reminiscent of no results (especially if interrupted by bad weather); only Tests abandoned without a ball bowled would be excluded for rating purposes.”

No, there was nothing about matches disrupted by rain (unless it was completely rain-washed). We are still a bit confused regarding how the predictor actually works, but as far as this incident goes, CricketCountry owes you an apology. 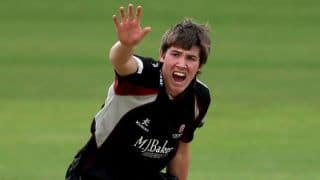