The No 1-ranked One-Day International (ODI) team in the world, India, remained unbeaten throughout the ICC Champions Trophy 2013, thereby backing up their 2011 World Cup win with another ODI trophy. Jaideep Vaidya reasons as to why this win appears better and more satisfying than the one two years ago. 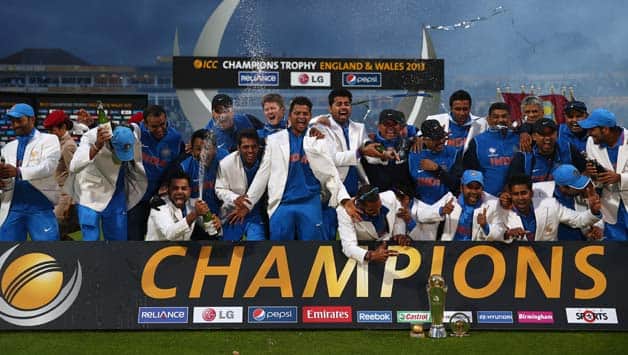 The No 1-ranked One-Day International (ODI) team in the world, India, remained unbeaten throughout the ICC Champions Trophy 2013, thereby backing up their 2011 World Cup win with another ODI trophy. Jaideep Vaidya reasons as to why this win appears better and more satisfying than the one two years ago.
Like a student hopping mad after topping the class in an examination, the usually constrained India captain MS Dhoni could not resist the urge to bounce up and down in glee when James Tredwell failed to score a six off the final ball of the ICC Champions Trophy 2013. Two years ago in Mumbai, on a humid April evening, Dhoni had himself deposited the ball over wide long-on for half a dozen off what turned out to be the last ball of the match to win India their first ODI World Cup after 28 years. Even then, his emotions were in check and provided no comparison whatsoever to the ones seen recently at Edgbaston on an overcast June evening. The Champions Trophy is far from being the Holy Grail of cricket, even though this was the last edition of the tournament. So, what could have possibly delighted Indian cricket’s ‘Iceman’ so much as to warrant such an extravagant, by his standards, celebration?

Perhaps it was the manner in which India won the final — overturning a sure-shot defeat, after leaving England with a meagre 130 to chase in 20 overs and then watching them coast along to 110 for four, only to spark an inconceivable collapse. India took four wickets in the space of seven balls, even as England fell short by five runs in the end to cap a spectacular choke. Comparatively, the World Cup final was a damp squib where India chased down 275 with 10 deliveries to spare, and were never really out of the game. There, Dhoni had scored an unbeaten 91 and had taken his team home. Here, he had a duck to his name after India batted first and had to rely on his bowlers and his acumen as a captain to mastermind a way through. Given how he reacted, perhaps this was more satisfying.

Perhaps it was also because of the troubles the Indian team had left home prior to the tournament. A vicious spot-fixing saga was usurping Indian cricket like a giant whirlpool just as Dhoni and his men prepared to set sail for England. The captain of the ship chose to keep his crew away from the eye of the storm and single-handedly steered the vessel through all the allegations with a serene look on his face, even as the spiteful, headline-hungry media sharks looked to dent and disfigure it. The clash of the eight best ODI teams in the world had taken a backseat. It seemed no one back home really cared how India would fare in the tournament; it seemed as if everyone was just waiting for the team to crash out at the earliest so that they could all jump on the team like a pack of hungry, ferocious wolves.

Tucked away safely 10,000 km from home, India responded by brushing off a spirited Sri Lankan challenge and then mopping the floor clean with defending champions Australia in the warm-up games. When the actual tournament began, they sailed through the group stage unscathed, beating the dangerous South Africans, the unpredictable West Indies and arch rivals Pakistan convincingly. Slowly, the loyalties had begun to shift from news channels to the sports channel. By the time the Lankans were dispatched again in the semi-final, it was a foregone conclusion — India were unbeatable and firm favourites for the title. Still, back home, there were some cynical elements who were passing around text messages predicting the result of each match of the tournament, all with one single outcome that India will win the cup. It seemed like a lose-lose situation: if they lose the final, they are fixers; if they win the final, they are fixers as well.

Oblivious to the public sentiment back home, Dhoni had fixed the blinders on his steeds and jockeyed them into the final. Newspapers were banned from the rooms of the players, three beefy bodyguards had been appointed to keep them away from the public and media. For this team, nothing else mattered, apart from their performance on the field. And like burst of fresh air, the young Indian team stuck together, won matches and brought the belief back into the fans. They excelled in all departments of the game — batting, bowling, and, most bafflingly, fielding as well.

With an average age of 26-27 and sprightly lads like Virat Kohli, Suresh Raina, Ravindra Jadeja, Rohit Sharma, Shikhar Dhawan and Dinesh Karthik throwing themselves at the ball rather than over it to effect important catches and run-outs, it came to such a point that the international media covering the tournament labelled the Indians the best fielding unit in the world — something unheard of in the past. Even Dhoni, who had been criticised recently for slipping up behind the sticks, was at his vigilant best and affected two important stumpings in the final. India’s batting has traditionally been  their trump card and it was no different this time around, except that it was new young faces like Dhawan, Kohli and Karthik who were clobbering the best of bowling attacks, rather than Sachin Tendulkar and Virender Sehwag. A new bowling arsenal, devoid of the experience of Zaheer Khan and Harbhajan Singh, excelled in foreign conditions and capped it all by helping the team defend 130 in the final.

There was something different in this side compared to the one in 2011, which boasted of veteran firepower in Tendulkar, Sehwag, Zaheer and Harbhajan — all in their thirties. In the India of 2013, Dhoni, at 31, is the oldest. More importantly, this team appears to have the right balance going forward. It’s a debatable topic — one that has found many columns dedicated to it around the world — but this team, with the manner in which they won all their matches, has possibly outclassed the class of 2011. But the important thing to note is that it’s not just the on-field performances that call for such a comparison to even exist, but the way the team has fought against all physical and mental obstacles to come out untouched and shut their critics up. By the time India took on their historical enemies England in the final, they had won back the blessings of the fickle media and certain fair-weather, cynical fans back home. A great ending would say that the team had proved itself once and for all. However, knowing the see-saw nature of public sentiment, all it takes is one ‘Breaking News’ flashed in big, bold red to put it all back to square one.

But until then, let the team enjoy this win — one that has temporarily shifted the focus only to their cricket, one that seems more satisfying than 2011 given the circumstances, one that has already propped them up as favourites to defend their crown Down Under in 2015. There is a distinct panache about this new-look Team India that threatens to blow away each and every one in its path. Dhawan, with his confident and stylish twirl of his moustache and roar of a lion after reaching a century, perhaps exemplifies the class of 2013 to the tee.

Difficult and turbulent times lie ahead between now and 2015; but until then let’s live and let live in the moment, shall we?