Five years down the line, Lloyd is a part of the commentary team in the IPL. What do you make of him? Hypocrite? A hollow expert?

Back in 2010, David Lloyd was very critical about the Indian Premier League (IPL), but five years down the line, he is in the commentary box for the ongoing IPL. Nishad Pai Vaidya looks back at Lloyd’s column on the IPL written in 2010 and puts things in proper perspective.

“When you can watch Inter Milan vs Barcelona, why on Earth would you want to watch Chennai Chunderers v Delhi Dipsticks?,” is what David “Bumble” Lloyd famously wrote about the Indian Premier League (IPL) in his column for Sky Sports in 2010. “IPL comp is so good …shame that cricket takes second place on TV… (sic),” is what he tweeted about the tournament in the same year.

Five years down the line, Lloyd is a part of the commentary team in the IPL. What do you make of him? Hypocrite? A hollow expert?
When one takes such statements out of context, you get an erroneous picture of Lloyd, who is one of the finest cricket commentators going around. To know his exact views, you need to read his whole column on Sky Sports, written in 2010. It is a well-balanced piece that highlights the positives and the negatives of a tournament.

“I would like to make it clear that, viewed in isolation, I love it. The quality of the matches and the quality of the players is very high,” is what Lloyd wrote about the IPL in that column and went on to express certain areas where he felt it needed to work upon. Lloyd said that it has not aroused interest outside India back then. One can say that the IPL has made steady progress in that regard as far as fan following is concerned. Today, it is followed in a lot of the cricket-playing nations around the world.

The other important thing Lloyd pointed out was, “The way it’s covered lets it down as well; the cricket seems to get in the way of the adverts.” Back in 2010, the advertisements had become overbearing, at times they would pop up in the middle of the over. While the advertisements continue, those mid-over interruptions are no longer a part of the IPL. You can usually watch the entire over without any hindrances.

Lloyd had also pointed out then that the IPL “is continuously surrounded by controversy, investigation and rumour.” Since the first season in 2008, the league has had its fair share of controversies every year. The year 2013 was perhaps the most forgettable as the spot-fixing scandal came to light. However, 2014 was a quiet year as far as controversies were concerned and it was largely trouble-free, barring the odd skirmish on the field of play. So far, the IPL 2015 too has been a decent affair without any big stories marring the on-field play.

Thus, Lloyd’s observations back in 2010 were quite fair and balanced. With the tournament evolving over the years, perhaps his doubts were settled and he made a decision to come over and soak in the atmosphere. 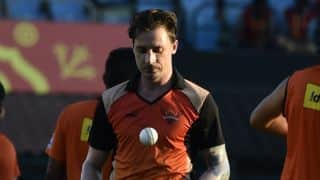