Two greats from two different sports have led a somewhat parallel life, have made their country proud and have redefined class.

If some consider cricket ‘a religion’, there are many who contemplate football as ‘a way of life’. If one seems to be more eventful, the other ceases to be beautiful. Yet, it is the players who make a sport look phenomenal to the eyes. And yes, they are the ones for whom this piece is about. Two players from two different sports who have a lot in common and are near-replicas of each other in more ways than one. Former Sri Lanka cricket legend Mahela Jayawardene and Spanish football midfielder Andres Iniesta have a lot that makes them look similar. Infact, both wizards have led parallel lives.

Mahela was a diminutive batting genius who took Sri Lankan cricket to the next level since his Test debut against India in August 1997. ‘Maiya’ was known for his calm, composed style of batting, studded with the most elegant of strokes, and a voracious appetite for big scores. His class, along with that of partner-in-crime Kumar Sangakkara, was a joy to watch not only for fans of Sri Lankan cricket but also for followers of the game. Their retirements from cricket left voids to be filled in Sri Lanka’s team. READ: Kumar Sangakkara and Mahela Jayawardene: Cricket’s most iconic bromance

When talking about football, an advantage that short footballers enjoy is that they have a “quicker stepping pattern”. They can change directions much faster. Andres Iniesta, who plays for FC Barcelona and represents Spain, is an artist of sorts. His vision, skills on the ball, extraordinary dribbling skills, turn of pace and balance make him a complete midfielder and one of the best of his generation.

Like Mahela, Iniesta, too had a partner and friend he could count on any time. Xavi Hernandez, his friend and colleague at Barcelona and in the Spanish national side, was his reciprocal. The duo played a massive role in the success of possession football or the tiki-taka form of play to take Barcelona towards new heights and achievements. Footballers with great touch and awareness, they were the pride of Barcelona in their Golden Era. Their chemistry on the pitch was so terrific that they knew where the other was, without even looking!

To know how they resemble each other in spite of playing different sports, it is important to look at what kind of players they were. What role did they play in the team and how the team looked up to them.

Elegance and style are words that suit both men. Jayawardene was an excellent stroke-player with gentle hands and supple wrists, as evident from his strokes. He played them off the pads with panache, and executed the late-cut to perfection. He could also flash the ball through the covers with grace. In short, he was an artist, not a grafter at the crease. READ: A statistical review of Mahela Jayawardene’s Test career

Iniesta the dribbler can hold the ball and retain possession of it for the team. He can cover spaces in a jiffy, and can launch counterattacks on the run. He can penetrate through the defences with breathtaking through-balls. At times he can even take a shot on goal. There is a reason they call him Don Andres.

If Jayawardene could play a reverse-sweep or a scoop over the wicketkeeper off a spinner, making it look like a treat for the eyes, Iniesta, with a spectacular run from half-way through the pitch into the box can embarrass opposition defenders. His fakes and signature moves can look flawless at times. They need not be successful in every outing, but they usually leave that one mark of brilliance every time they take field.

If Iniesta has a knack of performing way above expectations in big games, so did Jayawardene. Iniesta’s goal for Spain against Netherlands in the final of the FIFA World Cup 2010 can never be forgotten; the same holds for his 93rd minute-goal against Chelsea that took Barcelona through to the Champions League Final 2009.

Jayawardene’s 103 off 88 balls against India in the World Cup Final 2011 cannot be left unappreciated as well. Though Sri Lanka lost the final, but an Angelo Mathews quote sums up what his team thought of Mahela: “We know he’s a world class player. I believe he’s a big-match player”.

To sum up this piece, it can be said that both players had a trademark quality about themselves – Control. Well, Iniesta still has it. And, perhaps it was not necessarily about pulling their respective teams out of crisis situations. When it came to handling arguments or calming down a teammate or negotiating with the umpire, Jayawardene was always there, calm, serene, in complete control, restoring normalcy.

Iniesta is similar. He makes sure that he is heard when the referee makes a decision — but never in an argumentative manner. Just like the Lankan master, the Spanish giant has been in complete control on the pitch.

In short, both are artists of small frames, were masters of their sports, had a sense of the occasion, usually left a mark every time they took field — and were often the ones controlling matches.They have proved to be gems for their respective teams and made their countries proud. There can be nothing greater than that. 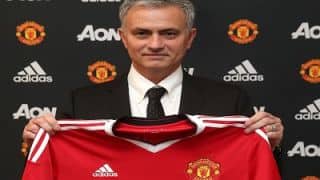