'Good behaviour' and 'being respectful' are two early lessons in life that most Indians take. This is ingrained in our culture, literature, mythology and DNA. But many a times, as history would invariably suggest, this same attitude has done us harm in more ways than one.

‘Good behaviour’ and ‘being respectful’ are two early lessons in life that most Indians take. This is ingrained in our culture, literature, mythology and DNA. But many a times, as history would invariably suggest, this same attitude has done us harm in more ways than one.

Whether it was the Islamic invaders or the British, everyone used India, for we were a gullible, satisfied lot who would never invade territories and believed in tolerance. We were grown up with stories of Ramayana and such epics and were urged by our elders to be like the iconic characters polite, humble and modest.

A country’s no. 1 sport is often the reflection of the people of that nation. These same beliefs, which are aforementioned, are percolated deeply into our sports as well.

The Indian cricket team of 1980s and 1990s would always be on the receiving end of verbal abuse, banter and sledging especially on overseas tours. Often they succumbed to those verbal beamers by opponents more than those by the bowlers. We looked at the historical giants of the game the Australians, the Englishmen etc with a sense of subconscious inferiority complex, knowing they were superior. This continued even in the early 2000s when Steve Waughs and Ricky Pontings would easily threaten us on field with their sledging and a certain indomitable aura around them and our players would remain mellow, with Indian players not talking back. They were respected all around but they could easily be pushed over. But things changed at the turn of the millennium.

A man from Kolkata stood up. A man who believed in ‘tit-for-tat’, a man who was had no second thoughts to wave his blue jersey in the balcony of cricket’s holiest venue. Mumbai is our Mecca if they think Lord s is theirs , he would later explain. It marked a turnaround of sorts, and the preconceived notions of India began to change. Sourav Ganguly was the catalyst for this change. He was the one captain who was not afraid to look at the Kangaroos and the British in the eye. Just to add to thrill, the start of the tenure of Ganguly’s captaincy coincided with the release of Lagaan. Ganguly became the nation s Bhuvan.

However, after Ganguly, India kept searching for another personality like him who could look at the opponents in the eye and give it back. Gautam Gambhir, Sreesanth and Harbhajan Singh tried hard to be like Dada but they could not succeed for a time long enough to become the role models. With Sreesanth, more often than not his words made more headlines than his performance and Harbhajan and Gambhir often had tendency to go overboard.

The current generation of Indian cricketers have grown up watching Ganguly and in more ways than one, the person who seems to have been most inspired by Ganguly’s aggression is undoubtedly Virat Kohli. In a recent interview, Kohli remarked, “From Dada (Ganguly) I have learnt not to back out from any situation. Not have second thoughts.”

There is a reason why all of India loves Kohli. Not just for the mountain of runs and records he has already created but more so for the approach with which he conducts himself on the field. There is a certain aura around him. For a generation that grew up worshiping Sachin Tendulkar and Rahul Dravid, Kohli might appear blasphemous. He represents a generational change; “today’s India” in a nutshell. An India, with abundance of talented, expressive individuals unafraid of even the most daunting challenges and no sense of inhibition whatsoever.

A 20-year-old Indian today wears his heart on his sleeves but at the same time knows not to cross the limits of decency. He is willing to do whatever it takes to win and win fair. Yes, he might appear brash and arrogant but the fact of the matter is that he is passionate and his passion to win, to finish games, to not give an edge to the opposition is infectious. There is no bigger force than passion that drives individuals towards greater heights. Also, today s generation regards performance and merit as bigger yardsticks than merely experience or position. Perform or perish has become the norm in today s India whether it is in sports or any other profession and it is here that people closely relate themselves with Kohli. Today s generation is not afraid to sweat it out whether it is sitting in front of a computer in a small cubicle encoding programs in the same manner as Kohli does cardio in a gym much after the day s play has been completed. However, today s generation demands results and believes in celebrating victories loudly a trait we would never associate with someone like Tendulkar, Dravid or Gavaskar.

Kohli is a trendsetter even on social media. He has always come out in support of women against trolls and for that matter, his chivalrous message defending Anushka Sharma from the trolls made the people respect him even more as an individual. Recently, when he shared on Twitter a photograph of him with a book titled, Autobiography of a Yogi and its impact on his life, the sales of the book on Amazon and Flipkart just took a giant leap which again shows how people want to be like him passionate and successful.

Yes, Kohli may perhaps not garner universal respect like Tendulkar and Dravid, but he might end up being the most successful cricketer from the nation. He has created a niche for himself. Open the sports pages of Australian dailies and Kohli dominates. Opponents love to hate him. This is a sign of a successful person.

Many a time it may so happen that success gets to your head and you tend to become so arrogant as to not accept your shortcomings or cross all limits to emerge victorious. And this is where Kohli stands out from the rest.

There is an Australian-ism in Kohli’s attitude that has made him a thorn in their way. Australians did not like Ganguly, they do not like Kohli. The aggression may resemble Australia but Kohli still differs. He loves to win but does not believe in ‘win at all cost.’

Ponting signalling ‘out’ to Umpire Mark Benson after Michael Clarke claimed a grassed catch of Ganguly in the infamous Sydney Test of 2008 still boils the blood of Indian fans. Had DRS been in place in that Test, India would have returned from Australia 2-1. Recently, in the just concluded Bengaluru Test, Steven Smith was seen taking unfair advantage of DRS by looking at the dressing room for clues. It is fair to say from whatever we have known about Kohli so far, he would have never done what Ponting or Smith did in the above circumstances. He plays it fair. Follows the spirit of the game. Young India believes in ethics.

Talking about honesty as an individual, Kohli was very open to confess his mistakes after the loss in the Pune Test. He presented no excuses. He backed the guys, fought hard, played fair and inspired his side to pull off a remarkable win in the second Test.

Kohli represents the modern India. We all should adore Kohli and adore him more. And if you thought he could not be subtle, just watch his post-match press conference where he responded to Ian Healy’s jibe at him.

Yes, being modest, polite, soft-spoken is a virtue but inject passion, aggression and dose of extroversion and you have Kohli. Yes, you can play bold and yet play fair and that is why the youth loves Virat Kohli. 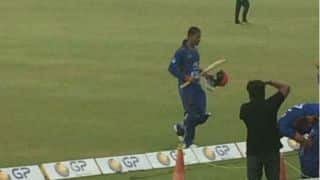