Matthew Brimson remains the only cricketer to flash while being photographed by Wisden.

April 6, 2000. Wisden released its long-awaited edition, and with it rose a new controversy. Matthew Brimson, Leicestershire left-arm spinner, was caught flashing in a team photograph, causing a stir in cricket fraternity. Abhishek Mukherjee revisits the incident.

Wisden 2000 was perhaps the most anticipated edition in the history of the almanac. The 1,600-page hard-bound Bible of cricket, with the two familiar Victorian gentlemen on the yellow cover came along with a 224-page paperback — A Century of Wisden.

Readers eagerly flipped through the pages. Yes, Wisden was the same, as always. They even went past the ill-fated page 657 that would go on to cause a stir. It took an Evening Standard journalist to spot it: was he really seeing what he thought he did?

It was the usual team picture of Leicestershire County Cricket Club — the kind that appears in Wisden every year. There they were, the members, in the usual three-row formation. Leicestershire, County Champions in 1996 and 1998, had not been able to clinch the title in 1999 — but were still a respected side.

They had, in their line-up, some big names like Chris Lewis, Alan Mullally, Paul Nixon, Darren Maddy, Aftab Habib, Vince Wells, and James Ormond, apart from their overseas star Michael Kasprowicz. They also had a left-arm spinner called Matthew Brimson.

Brimson, then 29, played 13 matches in County Championship 1999, picking up 22 wickets at 32.72. There were nothing exceptional about those numbers; it was the photograph that earned him unwanted fame.

The Leicestershire side was photographed several times, and as one of them was being shot, Brimson did something atrocious. To quote Chris Maume of The Independent, Brimson was “apparently demonstrating his skill at pulling out his middle stump.”

Unfortunately, it was the particular photograph that was selected for the 2000 edition of Wisden. Unwillingly, Wisden witnessed the first instance of flashing in their history. It was a major blow on perhaps the most puritan of all cricket entities for well over a century.

When readers pointed out, Matthew Engel, then Editor of Wisden, apologised immediately. He referred to the incident as “an insult to supporters”. Always at his dignified best, Engel added: “If you are going to pull this kind of stunt, you need to be a more competent professional sportsman than Matthew Brimson and, frankly, more impressively arrayed.”

Engel was certainly not amused. He wrote to Roger Goadby, Chairman of Leicestershire CCC, who did not bother to reply. Wisden sent a follow-up a month later. This time Goadby responded: “We have had a meeting with Matthew Brimson and we have accepted his explanation that it is simply not in his character to do anything that would cause offence. Matthew Brimson wishes to apologise to anyone who may have misinterpreted the published photograph.”

Goadby also blamed Engel for publishing the photograph. In other words, he was not apologetic at all for Brimson’s antics — for ‘misinterpretation’ of the organ on display made no sense.

This pushed Engel beyond the brim. He wrote in The Guardian: “Perhaps Wisden should employ a full-time penis-spotter, though for the past 137 years there has been a degree of trust between professionals that made this unnecessary…Perhaps he [Goadby] does have an explanation of the position of Brimson’s right hand, and his silly grin.”

Engel also admonished the incident as ‘bunker mentality’. Though no official charges for indecency were pressed against Brimson, he apologised, admitting that it was a ‘prank’.

Despite that, Brimson lost his Leicestershire CCC contract following that season. He is currently Head of Geography at West Buckland School, Devon. 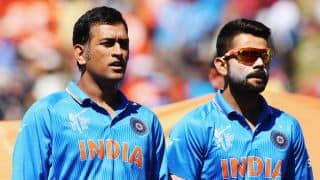