Without Sehwag, the threat of Anderson and Swann is real

Without Sehwag, the threat of Anderson and Swann is real

He gets them into positions that India has no capacity of even envisioning. 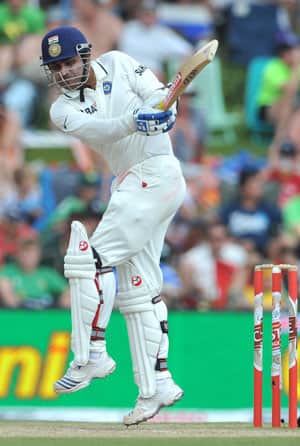 The absence of Virender Sehwag, one of the most destructive batsmen in the history of the game, and consequently his break-up with Gautam Gambhir as the most feared and solid opening partnership will hurt India big time © AFP

The only time, I was confident about India winning an away series was in 1986 when a strong Indian line-up took on an Australia in transition. That side on form and skill was almost as strong as this Mahendra Singh Dhoni-led Indian side; perhaps a bit stronger given that Virendra Sehwag will be watching the Lord’s Test from the sidelines.

That series ended in bitter disappointment for me when all Test matches were drawn; Adelaide because of a flat pitch, Melbourne due to rain and India’s strange reluctance to get on with things and Sydney when India, in spite of the rain, almost bowled out Australia twice in day and half, but ran out of time. After 26 years, India has still not won a series in Australia.

India have come a long way from that series, but then even as recently as Oval 2007 and Dominica 2011 they have shown that they are still averse to giving it their all in an away series. This may come to bite them because in this series, I have a feeling that the side that wins will be the one that goes for wins whenever they find an opening.

This series, will probably produce the highest quality of cricket in a long time, the crowds will be there and hopefully both sides will show up for all the games.

The last time, India lost a series in England was in 1996 and the last time England won a series in India was in 1985. To top that, India have the No 1 billing here and yet, it is England that have the belief that they can beat India and be the legitimate World No 1.

Early on when India became the No1 side and when England won the Ashes, there was a lot of noise among the English that India is not a legitimate No 1. But now that there is a distinct possibility of England beating India and claiming the top spot, there is unanimous agreement that India is the legitimate No 1. Strange are the ways of legitimizing rankings.

India will miss Sehwag. There is no disguising that. He gets them into positions that India has no capacity of even envisioning. Without him, the threat of James Anderson and Greame Swann is real. India have invested far too much in the IPL and in a way this will be contest between a side untouched by the IPL but are the World Champions in the shortest format and a side that is in bed with the IPL but World Champions in the longest format. Strange isn’t it?

I admit, I believe in England’s belief. I believe their batting is as strong as India’s if not stronger and I believe Swann is better than Harbhajan. In sum, I believe England will prevail at Lord’s and in the series. And I admit I also envision a horror scenario that Rahul Dravid, VVS Laxman and Sachin Tendulkar will go out the way India’s famed spin quartet were forced out, by the relentless attack from Javed Miandad and Zaheer Abbas. Three of the four from the famous spin quartet had played one series too many and I hope that Tendulkar, Dravid and Laxman never play that one series too many and that if they do, this is not the one.

Lord's - happy hunting ground for India players, if not for Team India

Sri Lanka announces one-day and T20 squad but not skipper