Played on October 9, 1987, the second fixture of the World Cup, between England and West Indies, was one for the history books. After trudging to a total of 243, West Indies had England on the ropes before Allan Lamb’s unbeaten 67 changed the complexion of the game. Karthik Parimal revisits the knock that saw England romp home with two wickets to spare. 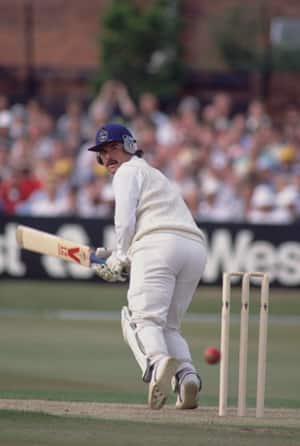 Played on October 9, 1987, the second fixture of the World Cup, between England and West Indies, was one for the history books. After trudging to a total of 243, West Indies had England on the ropes before Allan Lamb’s unbeaten 67 changed the complexion of the game. Karthik Parimal revisits the knock that saw England romp home with two wickets to spare.

The Indian sub-continent was bustling with excitement and anticipation, for it was the first time the World Cup had been scheduled outside of England’s traditional confines. The opening game between Pakistan and Sri Lanka, at Hyderabad (Sind), saw thousands flock to the stands to witness a high-scoring match, one that was eventually bagged by the home team by a narrow margin of 15 runs. Owing to One-Day cricket’s growing popularity and the thrill the opening fixture had provided, Gujranwala’s Municipal Stadium was filled to capacity for the second game between England and West Indies. It was to be one of the best One-Day Internationals (ODIs) played at the time.

While most teams stacked their line-ups with spinners of all kinds keeping in mind the surfaces that would be meted out in the sub-continent, England roped in four fast and medium-paced bowlers — Phil DeFreitas, Neil Foster, Gladstone Small and Derek Pringle — and preferred to utilise the services of just one off-spinner in the form of John Emburey. The repercussions of it were felt in the initial rounds of the tournament, and it was against West Indies the advantages of having a slower bowler in the tank came to the fore.

With Carlisle Best and Desmond Haynes back in the hut for paltry scores, Viv Richards and Richie Richardson consolidated with sharp running between the wickets interspersed with fine hits to the fence. It was Foster who retaliated with scalps of the duo in quick succession. Emburey was brought in for a spell around the same time, and he turned the screws with balls that hissed and spat like a venomous cobra. He came close to making inroads on several instances but concluded with 22 runs from his 10 overs, inclusive of a maiden. Although wicketless, he was a thorn in the flesh of the West Indians on the day.

After seeing Emburey off, Jeff Dujon and Gus Logie shed all inhibitions. The two thwacked the rest of the English attack, notably Pringle and Foster, as runs leaked ominously. After Dujon was run out, Roger Harper took over the mantle. Twenty-two runs were scored off Pringle’s last over, the penultimate of the innings, before Logie fell for a 41-ball 49 and Harper was bowled by Small for a 10-ball 24. From 151 for 4 in 40 overs, West Indies galloped to finish on 243 for 7 from their allotted quota of 50 overs. Ninety-two runs were conceded by England in the last 10 overs.

A target of 244 was by no means going to be a cakewalk for England. While their own batting line-up appeared depleted in the absence of Ian Botham, they had to contend with pacers the calibre of Patrick Patterson, Courtney Walsh and Winston Benjamin. In Harper and Carl Hooper, the West Indians had bankable spinners. England’s innings commenced with Chris Broad edging one off Walsh to wicketkeeper Dujon, followed by Tim Robinson’s disastrous run out. Mike Gatting and Graham Gooch then put on 58 in nine overs, before Hooper flummoxed them with his off-breaks. Once they departed, the middle-order made a meal of the chase.

Allan Lamb offered stoic resistance at one end and stitched together a small partnership with Pringle. But Hooper usurped his third wicket as Pringle played one straight to Best, and England plunged into further depths at 123 for 5. Paul Downton didn’t last long either, run out after facing just four deliveries. Emburey then strode out and gave England’s innings a much needed shot in the arm. While Lamb kept piercing the gaps, Emburey carted the bowlers, smashing 22 runs, inclusive of a four and a six, before Patterson sent his stumps cartwheeling off the turf. At 162 for 7, England — needing 82 off 54 balls — looked helpless and staring down the barrel. Nonetheless, Lamb kept searching for runs, primarily boundaries, and was blessed with invaluable knocks from the lower-order batsmen. It was DeFreitas who took the West Indian attack head-on this time around.

Fading light and the guile and pace of Walsh, Patterson and Benjamin notwithstanding, Lamb and DeFreitas etched a 47-run partnership. Lamb duly put away a barrage of full tosses over the point fielder and through deep mid-wicket, and his colossal forearms were also instrumental in implementing the cuts that sped away to the fence. A searing Patterson yorker got rid of DeFreitas, but he’d made 23 from just 21 balls and contributed more than his share by then. Foster was the new batsman. With 35 runs needed off the last three overs, the onus was on Lamb to get the English home.

Walsh’s penultimate over resulted in carnage. Sixteen runs were scored, 15 of them by Lamb and the good work he’d done until that point (his figures read 5-0-11-0 before Lamb went berserk) was now in shambles. Patterson returned to bowl his 10th and conceded just six, thereby putting West Indies slightly ahead going into the final over. However, Walsh was buckling under pressure, the evidence of which was provided by four leg-side wides and a no-ball. Another full-toss that was doled out was smacked over to the boundary by Foster as England romped home to a famous victory. Lamb, unbeaten on 67 off 68 deliveries, a knock that featured five hits to the ropes and one over it, was overjoyed.

On the other hand, an inconsolable Walsh was led off the ground with Richards’ supportive arm around his shoulders. The 20000-strong Gujranwala crowd, who were in a state of frenzy, had their money worth. It was a game that would bolster the reputation of One-Day cricket.