Despite the decent attack, Sri Lanka were the underdogs going into the match.

The hapless Sri Lankans ran into a rampant Viv Richards at Karachi on October 13, 1987. Abhishek Mukherjee reminisces one of the most brutal onslaughts in World Cup history.

Long, long ago, in the 1970s and 1980s, there used to be an ogre called Viv Richards who ruled the world with a mace they called a bat. He was sometimes lenient, but those were rare occasions. When he got going nobody stood a chance; and when he decided to go on a rampage, all and sundry were massacred. This was one such day.

The Sri Lankans had a decent attack: the steady Vinothen John; the aggressive Ravi Ratnayeke; the economic left-arm spin of Don Anurasiri; and holding up the rear was Ashantha de Mel, who had taken two five-wicket hauls in the previous World Cup. There were also back-up bowling options in the form of Aravinda de Silva, Arjuna Ranatunga, and Asanka Gurusinha.

Despite the decent attack (and a solid batting line-up to back them up), Sri Lanka were the underdogs going into the match. Duleep Mendis’ move of putting the West Indians in was probably a gamble; he may have thought it would backfire, but he had not probably expected this.

There was nothing wrong with the way Sri Lanka had started that day. Both John and Ratnayeke did a good job of restricting the West Indian openers. Then Ratnayeke clean bowled Carlisle Best. Richie Richardson walked out, and edged the first ball to Brendon Kuruppu. West Indies were 45 for two. Ratnayeke was on a hat-trick. Sri Lanka were on top.

And then, out strode the man they call King Viv, his rippling biceps threatening to bulge through the shirt, his furious chewing of the gum enough to send a chill down the spine of bowlers, the disdainful gaze that, as Sunil Gavaskar wrote in Runs ’n’ Ruins, conveyed the message “what am I doing here among children? I should be among men”.

He started with a couple of expansive cover-drives before opening up. Desmond Haynes increased the pace as well, and suddenly runs started coming from both ends. Richards’ fifty came up with a push to mid-on off Anurasiri. It had come off 62 balls. The onslaught was yet to be launched.

The first signs of brutal aggression came when Aravinda aimed one to leg-stump. Richards moved outside leg-stump and smashed the ball through extra-cover so hard that the fielders did not even think of moving. The first six was a brutal smack over the bowlers’ head.

Haynes reached his hundred before being bowled by, of all people, Gurusinha for a 124-ball 105 — an innings that would have been lauded on another day. Unfortunately, this was not his day. Gus Logie joined Viv, and was content to provide him the strike. Richards’ hundred — off 98 balls (which meant that the second fifty took him 35 balls) — came up with a two from an extra-cover drive.

Richards’ sword knew no mercy. Extra-cover, square-leg, and mid-wicket were the most targeted areas: the fielders ran, but they need not have bothered. Several of the shots cleared the fence comfortably; and most of the others were hit so hard that they did not have time to react.

Pakistan’s 338 for five, scored four years back against at Swansea, was eclipsed. West Indies registered the highest score in One-Day Internationals (ODIs). Kapil Dev’s iconic 175 not out at Tunbridge Wells did not last either; Richards bettered that with a straight six.

Then de Mel pitched one outside off, and as Richards tried another swipe, his left hand came off the bat. Roshan Mahanama ran and ran from backward point to third-man and dived to came up with an astonishing catch. The catch was named seventh in the Bush Great Catches Contest that followed World Cup 1987. Richards’ 181 had included 16 fours and seven sixes; the last 81 runs had taken him 33 balls.

West Indies were on 343. Roger Harper was promoted above Carl Hooper, and Logie (who finished on 31 not out from 25 balls without hitting a boundary) ensured they reached 360 for four in 50 overs. De Mel took the maximum flak, finishing with one for 97 off his ten overs: it remains the worst economy rate for a bowler who had bowled ten or more overs in a World Cup innings (though Martin Snedden had considered most runs with his 12-1-105-2 against England at The Oval in 1983).

The most surprising aspect of the Sri Lankan bowling were the figures of John and Anurasiri, who conceded a mere 87 from the 20 overs they bowled between them. The others, well, were hardly comparable.

Mahanama threatened to score all the runs by himself; he struck three boundaries off the first three balls he faced before edging the fourth to Jeff Dujon off Walsh. Kuruppu fell early too, and once Aravinda perished off Hooper Sri Lanka shut shop, trying to bat out fifty overs.

Gurusinha faced 108 balls for his 36, and though Ranatunga reached his fifty towards the end of the match and Mendis played some excellent strokes, Sri Lanka never made an effort. Richards gave his fast bowlers rest, allowing himself and Richardson to bowl in the final stages. Sri Lanka lost by 191 runs.

Man of the Match: Viv Richards. 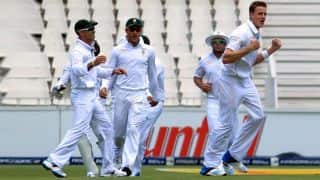