England famously beat South Africa in the semi-final of World Cup 1992. But before that, they had edged past them in a thriller in the league stage.

March 12, 1992. Abrupt rainfall at Melbourne and a weird rain-rule left an injury-affected England to chase a steep target against Allan Donald and co. Abhishek Mukherjee re-lives a maniacal chase.

It was a match between England and South Africa in the 1992 World Cup. The match was interrupted by rain. It turned out to be a keenly contested encounter. And, in the end, England emerged on top. And, no, it is not the semifinal (of 22-runs-in-one-ball fame) that is being discussed here.

England had remained unbeaten in the World Cup till then, beating West Indies, Australia (perhaps their most satisfying victory), and Sri Lanka; they were also on course against Pakistan before rain led to abandoning the match: chasing 75 England were 24 for 1.

South Africa, on the other hand, had mixed results: they shocked Australia with their first ever World Cup match, crumbled in front of the New Zealand juggernaut, surprisingly lost to Sri Lanka, but fought back with wins against West Indies, Pakistan, and Zimbabwe. Both teams were contenders for the semifinal when they clashed that afternoon at MCG.

A plethora of injuries

England went in with Alec Stewart leading them in absence of an injured Graham Gooch; additionally, Chris Lewis was down with a side strain, but the think-tank decided to play him as a specialist batsman. There was rain in the air, and Stewart, with an attack consisting of Phil DeFreitas, Derek Pringle, Ian Botham, Gladstone Small, and Dermot Reeve (along with Richard Illingworth), put South Africa in.

Kepler Wessels and Andrew Hudson started off with pushes straight down the ground, and punishing anything short of a good length. Fifty came up, then a hundred; worse followed, when Reeve slipped during his third over, injured his back, and could not bowl anymore. A helpless Stewart turned to Graeme Hick. It was he who provided the breakthrough when Hudson hit one back to him in the 36th over; the score read 151; Hudson had scored 79 of them.

Peter Kirsten walked out and cleared the big straight boundary off Illingworth, but he fell trying to clear the deep mid-wicket fence off DeFreitas. Soon afterwards DeFreitas injured himself, and later left the ground limping (albeit after sending down ten overs); Hick also snared Wessels for a gritty 85.

Jonty Rhodes was run out following a mix-up with Adrian Kuiper in the 46th over; Kuiper and Hansie Cronje threw their bat around, and South Africa finished on 236 for 4 a formidable score given the conditions and the size of the ground (one must remember the ropes were not brought in those days).

Botham had been a success up the order through the tournament. This time, however, Stewart took centrestage; Allan Donald bowled with fire, edges flew around, tempers soured, but Stewart kept leading the English counterattack. Botham joined in the fun, lofting Brian McMillan through mid-off for four.

Then came the rain, with England on 62 without loss from 12 overs and Stewart on 40. They needed 175 from 228 balls at that stage. Rain left them 41 hours to bat, and thanks to the rain-rule, only 11 were reduced from their target. With rain in air, a rampant Donald on the prowl, Gooch missing, and three more injured men (Lewis, Reeve, and DeFreitas), England needed 164 more from 174 balls.

A solitary run was added before McMillan swung one in through Botham s gate and pegged the middle-stump back. Two balls later Robin Smith tried one his ferocious square-cuts, Dave Richardson pouched the ball, and that was that. Hick managed a single, and chased one from Richard Snell the next over; from 62 without loss England had slumped to 63 for 3.

Stewart was clearly unhappy at the other end. He knew it had to be him. He started with cutting Snell through third-man for four; Neil Fairbrother provided support at the other end, and the runs came accumulating. England reached exactly 100 in 23 overs, which left them to score 126 at exactly 7 an over. One must remember this was 1992: the bats were human , Twenty20s belonged to gullies, and the steep rate at MCG with three injured men in the pavilion was nigh-impossible.

Stewart cut loose, lofting Cronje over mid-on for four; Fairbrother responded with a pull through square-leg; runs kept at a breakneck pace, though South Africa kept things under control, thanks to their superlative fielding. The pair added 68 before Stewart made the grave mistake of taking on Rhodes arm: he fell short of the throw at the bowler s end. Stewart s 77 had taken 88 balls, and they still needed 94 in a little over 13 overs.

The onus fell on Fairbrother. He slapped Meyrick Pringle past point for four to bring up the 150; Reeve ran frantically, ensuring Fairbrother got more of the strike; unfortunately, just after Fairbrother reached fifty, Reeve tried to hoick Snell, mistimed it, and ended up being caught at mid-on. England needed 60, but wickets were falling, and they had just over 8 overs left.

Lewis walked out and immediately smacked one over extra-cover for four, and flicked one past square-leg and leg-glanced one for two more. Fairbrother, somewhat smartly, was perfectly happy to take second fiddle. Lewis smote one past mid-wicket with a nonchalant flick of the wrist for another boundary. They now needed 25 from 27, but the drama was far from over. With the target below 20, Fairbrother decided to finish things off in a hurry, pulling McMillan for four.

Wessels sensed the match was drifting away. He brought Donald back for one final go; Fairbrother cut him to point, but that man Rhodes, as sharp as ever, noticed that Lewis was out of the crease; Fairbrother never left the crease, and the throw to Donald found Lewis short of the crease. As a disgusted Lewis left for a 22-ball 33, England needed another 10.

Fairbrother hit a boundary and a two, which left England to score a solitary run off the last 3 balls. Wessels brought the fielders inside the circles, Snell bowled a full-toss, and Pringle hit it straight to Kuiper at short mid-wicket. The South Africans regrouped: could they pull off a tie?

Fairbrother walked up to greet DeFreitas as he walked out. DeFreitas had a swing. The ball took the outside edge and bisected extra-cover and point: it had been a clinical, disciplined effort from South Africa, but the brilliance of Stewart and the temperament of Fairbrother turned out to be too good in the end.

England (second in the group) and South Africa (third) met again, this time in the semifinal. England again won a rain-affected match, where South Africa were left to chase 22 off the final ball. Though the rain-rule is usually ridiculed, South Africa have also themselves to blame, since they bowled only 45 overs within the stipulated time.

Man of the match: Alec Stewart. 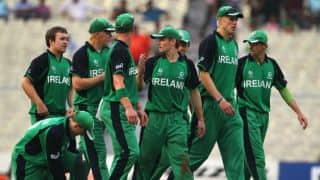 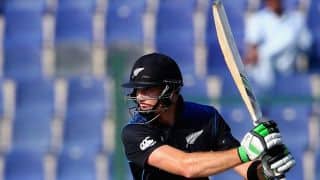