In our latest World Cup Countdown, we recall how India suffered a shocking defeat against Sri Lanka - then an Associate member - in 1979.

In the build-up to the 2019 ICC Cricket World Cup, CricketCountry brings to you the most memorable moments and matches from the Cricket World Cup right from its first edition, way back in 1975. With 94 days to go, in our latest World Cup Countdown, we recall how India suffered a shocking defeat against Sri Lanka – then an Associate member in 1979.

In 1979, Sri Lanka were the winners of the inaugural ICC Trophy, ahead of the cricket World Cup. The islanders had beaten Israel and Denmark before routing Canada in the final of the competition. By the virtue of that win, Sri Lanka qualified for the World Cup which was their second World Cup. In the 1975 edition of the competition, Sri Lanka had lost all their three league matches. (READ: World Cup Countdown – Canada shot out for 45)

Sri Lanka had lost against New Zealand and a washout against West Indies ensured that they were out of the semi-final run. They were now up against Srinivas Venkataraghavan s India, who had lost their previous two games against West Indies and New Zealand. The game was a dead rubber; both teams only played for pride in Manchester. (READ: Hendrick takes 4/15 as England clinch a thriller)

India won the toss and put Sri Lanka in on a docile Old Trafford track. Sri Lanka were without their captain, Anura Tenekoon, who had damaged a hamstring the previous day at practice. Bandula Warnapura led the side in Tenekoon s absence.

After the early loss of captain Warnapura, opener Sunil Wettimuny and Roy Dias took charge of the situation. Wettimuny played eye-catching drives while Dias s wristy strokes were a treat to watch. The second wicket alliance of 96 off 25 overs laid a solid platform for Sri Lanka. If caution and steadiness were features of Wettimuny-Dias partnership, then Duleep Mendis dazzling strokeplay was a delight to the eye. Mendis bashed the Indian attack. He clubbed Kapil Dev, Karsan Ghavri and Mohinder Amarnath for a six each. The Indian attack was clueless in the middle overs.

Ranjan Madugalle was dismissed for four and was replaced by Sudath Pasqual, who was the youngest player of the competition. He complimented Mendis well, adding 52 off seven overs. Mendis made 64 off 57 deliveries, while Pasqual remained unbeaten on 23. Sri Lanka put 238 on the board, which was a fighting total.

The game had started late on Saturday, June 16 and hence at the close of Sri Lankan innings the day ended. India s run-chase was supposed to begin on Monday morning, since Sunday was a rest day. Chasing 239, India began solidly. The opening pair of Sunil Gavaskar and Anshuman Gaekwad was batting with assurance. They put on 60 for the first wicket before Gavaskar was dismissed for 26. Gaekwad departed soon for 33. At 76 for two, India needed stability and a big partnership.

Dilip Vengsarkar and Gundappa Viswanath provided stability and batted till lunch. India were comfortably placed at 117 for two at lunch, needing further 122 runs off 150 deliveries. Shortly after lunch, Viswanath ran himself out for 22. That led to panic in the Indian ranks. There was a spring in the stride of the Sri Lankans. After that run-out, Sri Lankan leg-spinner Somachandra de Silva took over and wreaked havoc in the Indian batting line-up.

de Silva went through the defences of Brijesh Patel and then dismissed the well-set Vengsarkar and Amarnath as well. Kapil Dev contributed a quick-fire 19-ball 16 but was dismissed before he could inflict any more damage. India were precariously positioned at 162 for seven, needing a further 77 runs.

Fast bowler Antony Opatha returned to bowl after his none-too-impressing spell with the new ball. He worked up pace, good enough to confound the Indian lower-order. He cleaned up the Indian tail Ghavri, wicket-keeper Surinder Khanna and Bishan Singh Bedi as India were dismissed for 191.

Sri Lanka earned wholesome praises from the entire cricketing fraternity. This performance was one of the main reasons for their ascension to the pinnacle getting recognised as a Test nation, albeit two years hence. 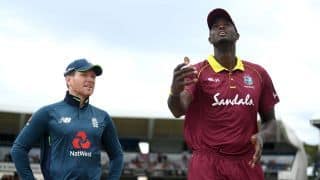