With 92 days to go, in our latest World Cup Countdown, we recall how West successfully defended their title in 1979.

In the build-up to the 2019 ICC Cricket World Cup, CricketCountry brings to you the most memorable moments and matches from the Cricket World Cup right from its first edition, way back in 1975. With 92 days to go, in our latest World Cup Countdown, we recall how West Indies continued their dominance with a second straight title win.

On June 23, 1979, West Indies bagged their second World Cup title, owing to a century from the magical willow of Viv Richards, a blitzkrieg by Collis King and toe-crushing yorkers from Joel Garner.

The second edition of the World Cup played out much the same way as the first. Eight teams participated, 15 fixtures scheduled and the 60-over format was round robin, followed by knockouts. West Indies were firm favourites to lift the coveted trophy for the second time in a row, and it wasn t a surprise to see them storm into the final.

England weren t touted as favourites against the might of West Indies. Furthermore, their bowling department had been weakened owing to an injury to Bob Willis. His replacement was left-arm spinner Phil Edmonds, who ended up as the most economical of the four specialist bowlers. England relied on part-timers Geoffrey Boycott, Graham Gooch and Wayne Larkins to chip in 12 overs to fulfil the minimum quota of the fifth bowler.

Ian Botham, Mike Hendrick and Chris Old immediately found assistance and a phase featuring quality swing bowling ensued. This was backed up by some sharp ground fielding, resulting in Gordon Greenidge being run out by Derek Randall. Soon, Desmond Haynes held out to Hendrick at slips. Hendrick then bowled Alvin Kallicharran around his legs. Clive Lloyd walked back after Old held on to a brilliant return catch. At 99 for 4, the defending champions were tottering.

Viv Richards, who dropped anchor at one end, welcomed the new batsman, Collis King, with the words, take it easy . However, the senior player s advice had no impact on King; he made it clear that he intended to hit out at the part-timers, especially Boycott.

What followed was carnage. In his next 6 overs, Boycott conceded 38 runs. As King created an outlet for the mounting pressure, Richards eased into the situation and got into a zone of his own. The English bowlers were thwacked from both ends.

By the end of their innings, Richards remained unconquered on 138, a knock that was inclusive of 3 sixes and 11 fours.

It was King s 66-ball 86 that received more accolades; including one from Richards himself. West Indies finished on 286 for 9 from 60 overs.

At tea, they were in with a chance at 79 for no loss, requiring 208 from the remaining 35 overs, few of which were to be bowled by part-timers. Sitting in the dressing room with refreshments on either side, Brearley felt the score was a perfect launching-pad for an onslaught.

He made up his mind to go after the bowlers in the following session, for Boycott would duly decline the offer had it been made to him. However, he was soon talked out of the plan by Botham and Randall, who both suggested Brearley carry on without trying to accelerate right away.

The innings continued at the same tempo, and then, when the scorecard read 129, Holding evicted Brearley and Boycott in quick succession. By then, the required run-rate had reached unimaginable heights and this put incredible pressure on the batsmen.

To make matters worse, only 50 runs were scored from the next 13 overs and no advantage had been taken off the part-timers, too, for Richards conceded just 23 in his 6 overs. Joel Garner re-entered the fray and wreaked havoc. His first spell yielded little success, but the second massacred the English line-up.

He accounted for the wickets of Graham Gooch, David Gower, Larkins, and Old all bowled, before having Bob Taylor caught by wicketkeeper Deryck Murray. From 183 for 3, England collapsed to 194 all out.

Garner s spell read 5 for 4 in 1.5 overs as he finished with overall figures of 5 for 38. West Indies won their second consecutive World Cup, this time by 92 runs, thereby revealing the gulf in class between them and the next best team in the world. 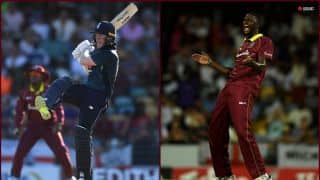