After India captain MS Dhoni flipped the coin, it looked as if he thought he had won the toss.

After the officiating fiasco that was the 2007 World Cup final, the last thing the International Cricket Council (ICC) wanted was any officiating goof-ups at the Wankhede Stadium on April 2, 2011.

MS Dhoni spun the coin, which came down with heads facing up. At the time of calling, Sri Lanka skipper Kumar Sangakkara s head was lowered and immediately after the coin came down a heads Dhoni turned to Ravi Shastri, presiding over the toss, to say India would bat. Then the confusion struck, because neither Shastri nor the match referee Jeff Crowe had heard Sangakkara s call.

Sangakkara claimed to have called heads but Dhoni did not appear so convinced.

Crowe’s uncertainly was due to how loud the noise in the stadium was. It was an odd explanation, for the Wankhede Stadium was not yet filled to its 33,000 capacity, and the noise was yet to reach its peak. Crowe called for a re-toss, which Sangakkara won and then opted to bat.

Replays of the toss indicated that Sangakkara had initially called heads, and the call was audible to producers of the host broadcasters, ESPN-Star Sports.

The situation begs two key questions. One, why didn t Sangakkara object before Crowe called out the result of the toss if he hadn t called in the first place? And two, why did Shastri begin to ask Dhoni what he wanted to do if Sangakkara had not called at all?

The incident immediately sparked an internet outcry with blog posts alleging everything from gamesmanship to skulduggery. Sangakkarra has stuffed Dhoni… He shouted tail in the 1st toss and lost it …You can hear it in on air, former England captain Michael Vaughan tweeted.

Who would have expected that in the big finals?” asked former India batsman Sanjay Manjrekar on his Twitter page. 2 tosses! Had to do re toss bcoz (because) the referee did not hear Sanga s call the 1st time.

Haroon Lorgat, the ICC CEO, defended the decision to appoint Crowe, who officiated in the previous final between Australia and Lanka in Barbados that finished in darkness in a farcical manner, to do the job at the 2011 final. “We review all the officials, all the component parts of the events, produce a full report whatever learnings were, we take note of it in the next event,” he said.

Four years earlier in Barbados, Crowe was the match referee who oversaw a mistake that led to the game resuming in farcical scenes amidst near total darkness. The match officials had forgotten that, as 20 overs had been bowled, a result could be declared. Crowe, when pressed at a post-match news conference, blamed that error on now retired South African umpire Rudi Koertzen, who was the television replay official for that match.

Perhaps only Sangakkara will ever know for sure, but the scale of the controversy has died down with India scripting a historic win. 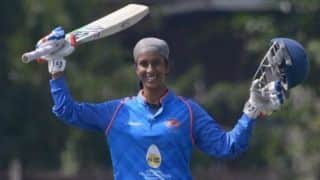 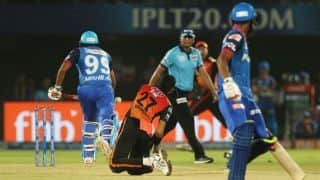