On August 21, 2003, Yasir Hameed scored 170 against Bangladesh on his Test debut at Karachi. He joined the elite club of scoring centuries in each innings when he scored 105 in the second innings. He became the second batsman after Lawrence Rowe to achieve this incredible feat on Test debut. Nishad Pai Vaidya takes a look at Hameed's twin tons. 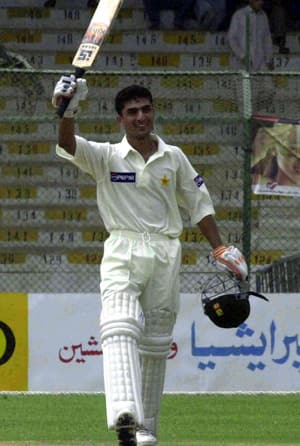 On August 21, 2003, Yasir Hameed scored 170 against Bangladesh on his Test debut at Karachi. He joined the elite club of scoring centuries in each innings when he scored 105 in the second innings. He became the second batsman after Lawrence Rowe to achieve this incredible feat on Test debut. Nishad Pai Vaidya takes a look at Hameed’s twin tons.
A Test debut is a big moment for any player. It is a reward for years of hard work and an unending belief in one’s dreams. However, at the big stage, one can get overawed in their maiden experience. Yet, there have been batsmen who have celebrated the occasion by scoring tons. But, think about two hundreds on Test debut! Lawrence Rowe, the West Indian managed it against New Zealand in 1972. On this day in 2003, Yasir Hameed set off on a mission to join Rowe in the exclusive club of batsmen who scored hundreds in each innings of their Test debuts.

Hameed was drafted into the Pakistan team in the aftermath of their disastrous campaign at the 2003 World Cup. With copybook technique and the ability to play shots along the ground, Pakistan were looking for stability. In May 2003, he made his One-Day International (ODI) debut and had played five games before he was handed a Test cap on August 20 at Karachi when Bangladesh toured Pakistan. Although Pakistan had numerous youngsters, they were expected to win with ease. Against all expectations, Bangladesh did manage to put up a fight. Mohammad Hafeez, Umar Gul and Shabbir Ahmed also made their debuts during the first Test at Karachi.

Pakistan captain Rashid Latif won the toss and elected to bowl first. Habibul Bashar’s 71 and Alok Kapali’s 46 took Bangladesh to 288 as they were bowled out early on Day Two. Hafeez and Taufeeq Umar started Pakistan’s challenge. However, Hafeez fell for only two in his maiden outing and Hameed joined Taufeeq in the centre.

The Bangladesh bowlers were not troubling the batsmen a lot. Hameed and Taufeeq saw off the new ball and then took control of the proceedings. Hameed’s good technique was evident early in his innings and was hitting the ball well. At the other end, Taufeeq was sedate, allowing Hameed to do most of the scoring during their 114-run partnership. That stand was broken when Taufeeq hit Mohammad Rafique to Javed Omar at point. Inzamam-ul-Haq was making a comeback and entered the field to join Hameed. In an anti-climatic situation, he was out for a blob as he offered a catch to mid-wicket. Suddenly, there were a few jitters in the home team’s camp.

The experienced Yousuf Youhana (as he was known then) joined Hameed. The senior man was cautious and not at his usual fluent best. Hameed had got to his fifty off only 80 balls and was looking more confident with every passing minute. By the time Yousuf arrived, he was past 60 and had the measure of the Bangladesh attack. Hameed then unleashed a flurry of boundaries in patches as some bowlers were made to play dearly for their errors. As Pakistan moved past 150, Hameed was nearing his hundred. He got to the milestone with a four off Alok Kapali. The two batsmen had added 56 till then and Hameed has scored 40 off those runs — which clearly showed how much he dominated the proceedings.

Yousuf was getting into his stride and picked up his run-scoring. Hameed was almost unstoppable and was smashing it around the park. In partnership, the duo took Pakistan past 200. Yousuf was dismissed for 46 when Rajin Saleh had him caught and bowled to bag his maiden wicket in Test cricket. Hameed was on 145 then, pacing towards the immediate milestone. A couple of overs later, he smashed Khaled Mahmud for four to bring up his 150. The resolute Misbah-ul-Haq was at the other end and took on a Yousuf like role. Hameed was ultimately dismissed for 170 when Mashrafe Mortaza had him caught by Mohammad Rafique. It was a very fluent and he had shown that he had the class. It may have come against a weak opposition, but Hameed’s ability to play by the book was obvious. His innings of 170 contained 25 fours, each adhering to the classic fashion of batsmanship. The compelling knock gave Pakistan a solid platform to take the first innings lead.

Latif’s fifty pushed Pakistan to 346, which allowed them to take a 58-run lead. In the second innings, Bangladesh were again led by Bashar who scored his second Test century. Saleh was the other run-scorer with 60. Shabbir’s spell of five for 48 was instrumental in bowling the visitors out for 274. Pakistan had to get 217 to win the first Test of the series.

Pakistan openers started off slowly. Unlike the first innings, Hafeez was to go on and make a significant score. Taufeeq fell in the sixth over with only ten on the board. Hameed walked in with more expectations this time around and didn’t he deliver! He again started off with a few boundaries and Hafeez held fort at the other end. The scoring rate was slow, mainly because Hafeez was biding his time gradually. He certainly had to make amends for his first innings failure on his debut. In comparison, Hameed was much quicker and outscored his partner. This time, he got to his fifty off only 71 balls as Hafeez playing the waiting game — a role of the anchor.

The duo continued to rotate strike, and Hafeez got to his fifty off 150 balls. He was out immediately thereafter as Rafique went through his defences. Inzamam was in with the score reading 144 for two. Out of those 144, 86 had been scored by Hameed and a second ton was very much on the cards. Two fours took him within touching distance and he got there by pushing Rafique for a brace when on 99. With those two runs, he had joined Rowe and it had taken 31 years for another batsman to replicate that remarkable feat.

However, Hameed could not see Pakistan through to victory as Rafique castled him on 105. He had put Pakistan in a position to win the game and Inzamam and Yousuf knocked off the remaining runs without too many troubles.

For Hameed, it was a dream come true. As Wisden noted, not only had he fulfilled his own wishes, but also of his father — who had predicted that his son would play for Pakistan someday and celebrate the occasion with three figures. Unfortunately, he wasn’t around to see his son’s success. It was also quite ironic that Hameed had made his First-Class debut at the very same ground seven years before this game. In complete contrast, he got a pair in that game. But, this time, it was a complete reversal of fortunes.

Those two tons, unfortunately, remain his only centuries in 25 Test matches. Hameed failed to capitalise on the dream start he got to his Test career.

Man of the Match: Yasir Hameed