As far as impact is concerned, Virat Kohli towered over them all. With a stunning batting average of 92.37, Kohli garnered 739 runs in a mere 10 matches.

No other team played as many ODIs as Australia last year. Steven Smith s team played 29 ODIs (though David Warner led them in 3 of these matches, winning all 3, during Australia s tour of Sri Lanka), whereas Sri Lanka ended with 19 matches in the 50-overs format at the second position. England and New Zealand played 18 each, but promising teams like Bangladesh and Ireland got only 9 ODIs each. Understandably, Australian batsmen topped the charts. Of the top five batsmen who got most runs in ODIs in 2016, there were three Australians: Warner, Smith and George Bailey. The other two were Quinton de Kock and Joe Root.

However, as far as impact is concerned, Virat Kohli towered over them all. With a stunning batting average of 92.37, Kohli garnered 739 runs in a mere 10 matches. He scored 3 centuries and 4 half-centuries, but it was Warner who stole the show in this regard. Warner slammed 7 ODI tons in 2016, the second-best in history of the format along with Sourav Ganguly. Needless to say, Sachin Tendulkar holds the record of scoring most ODI tons (9) in a calendar year. The year 2016 witnessed many special knocks, and in a batsmen-dominated format, the list is pretty long. Let us take a look:

David Warner 173 off 136 vs South Africa, Cape Town: This list is in no specific order, but Warner s fabulous knock in which he single-handedly demolished the South Africans in their backyard should be considered as the best ODI innings of the year. It was a brute of an innings, where Warner clobbered as many as 24 boundaries. He was at his best in the final ODI of a wretched series for Australia wherein they lost 0-5, but Warner gave everything he had to register a consolatory win for his side. However, he waged a lone battle, and Australia lost again.

Hamilton Masakadza 110 vs Afghanistan, Sharjah: In an intensely contested series in Sharjah, Afghanistan got the better of Zimbabwe. Afghanistan won 3-2 in a five-match series. In the final ODI which was a series decider, Masakadza gave his team the best chance to win. Batting first, Masakadza s century was the only bright spot for Zimbabwe who had won the previous two ODIs to make it 2-2. However, Masakadza had no support, and his innings, studded with 9 boundaries and 4 sixes was not enough. Afghanistan won the thriller with 2 wickets and 2 balls to spare and claimed the series.

Rohit Sharma 171 vs Australia, Perth: This was yet another brutal innings witnessed this year in a losing cause. On a good batting wicket, India decided to go in first and Rohit shone once again versus Australia in ODIs. He hammered 13 boundaries and 7 sixes to score 171. Rohit s century propelled India to 309 for 3 in 50 overs, but Australia won by 5 wickets with 4 balls to spare thanks to Smith s 149.

Mitchell Marsh 84-ball 102 vs India, Sydney: Marsh has Manish Pandey to blame for spoiling his party. It was one of those rare occasions when Marsh chipped with the bat, bailing his team out of trouble. He came in when Australia were struggling at 117 for 4, and scored his only ODI century till date. He added 118 runs for the fifth wicket with Warner (122), and Australia set India an improbable 331 to win in the final ODI. Marsh swatted 9 boundaries and 2 sixes to score 102 off just 84 balls.

Manish Pandey 81-ball 104* vs Australia, Sydney: Pandey s innings was the first impact knock of 2016. He came in when India lost Kohli, reaching 134 for 2 in chase of 331. He got along with Rohit to add 97 runs for the third wicket, and followed it with a brisk 94-run stand for the fourth wicket with MS Dhoni. Pandey showed signs of being a good ODI finisher as he hit the winning runs for India, despite losing his captain at the end of the innings. His innings was studded with 8 boundaries and 1 six.

Nizakat Khan 93-ball 94 for Hong Kong vs Scotland, Mong Kok: Scotland are more experienced than Hong Kong, but on this day, Nizakat proved why they cannot be taken lightly. After being asked to bat first, Hong Kong needed a considerable total on the board. Opener Anshuman Rath missed out on a century when he fell for 97 off 136 balls, but it was Nizakat who came up with a brilliant innings. He hammered 11 boundaries and 3 sixes to propel his team to 259 in 49.1 overs. Hong Kong won by 109 runs.

Jos Buttler 76-ball 105 vs South Africa, Bloemfontein: Buttler is a monster when on song, and this was one of those days when he had no mercy on the opposition bowlers. A 76-ball 105 is still a slow innings for someone who holds the record of three fastest ODI tons for England. Batting first against a struggling South African bowling attack, the top three batsmen piled on runs. But it was Buttler who beat the daylights out of the South Africans, smacking 5 sixes and 11 boundaries. His innings pushed England to a massive 399 for 9, and they won the clash by 39 runs via Duckworth-Lewis method.

Quinton de Kock s 96-ball 138 vs England, Bloemfontein: Had rains not interrupted, Buttler s innings would not have stood anywhere close to de Kock s. Chasing 400, South Africa needed a blistering start, and de Kock gave them just that. He belittled Buttler s effort by smacking 6 sixes and 12 boundaries en route a stunning onslaught. He would have demolished England further had rains not interrupted, since South Africa were 250 for 5 with more than 14 overs left in the chase.

Chris Morris 38-ball 63, SA win by 1 wicket vs England, Johannesburg: The high-flying England were bowled out for a mere 262, and South African tails were up with a moderate total in front. But as they say, you still have to go out there and score those many. Among the batsmen dismissed, barring Hashim Amla and Kagiso Rabada, every South African scored at least 27 or more. But it was Chris Tipo Morris who did the job for South Africa. The asking rate remained around 5, but Morris decided to have a crack at the English bowlers. Off 38 balls, he clobbered 4 sixes and 3 boundaries to stroke his way to 62, shunting England out of contention for a victory.

KL Rahul 115-ball 100 vs Zimbabwe, Harare: On India s annual trip to Zimbabwe, there was once again not much to challenge the Indians. But Rahul, making his ODI debut, decided to make it a memorable occasion for himself and his team. Chasing 169 to win in the first ODI, Rahul strolled to a hundred with the help of a six and 7 boundaries as India won by 9 wickets. This was the first occasion of an Indian starting his ODI career with a century.

Seekkuge Prasanna 46-ball 95 vs Ireland, Dublin: Sri Lanka batted first against Ireland in the second ODI. A run-fest was expected from the tourists, and Prasanna provided the fireworks. At No. 3, he smashed as many as 9 sixes and 5 boundaries but missed out on a century. However, Sri Lanka prevailed comfortably over Ireland by 136 runs.

Chris Woakes 95 vs Sri Lanka, Trent Bridge: Who would have thought that England and Sri Lanka will start their ODI series with a tie? Sri Lanka managed 286 for 9 in 50 overs. In reply, England stuttered as they slipped to 72 for 5 after 16 overs. Sri Lanka sniffed a win, but Woakes denied them. He teamed up with Buttler (99-ball 93) and stroked his way to 92-ball 95 with 4 boundaries. Needing 14 off the last 6, England tied the game with Liam Plunkett hitting a last-ball six.

Jason Roy 118-ball 162 vs Sri Lanka, London: One of the most brutal hitters of the ball, Roy diminished Sri Lanka s advantage after they had scored 305 for 5. Roy smacked 13 boundaries and 3 sixes, and England went on to win the clash by 6 wickets and 11 balls to spare.

Sharjeel Khan 86-ball 152 vs Ireland, Dublin: After Sri Lanka, it was Pakistan who went to Ireland and smacked the local side. After being put in to bat, Sharjeel made Ireland realise their mistake. He struck 16 boundaries and 9 sixes. Sharjeel began with a six and a four in the first over and hammered 3 consecutive fours off Peter Chase in the 17th over. Chase was punished further, when a six landed out of the ground in the 21st over. Sharjeel collected 2 more sixes and 1 boundary in the same over. Pakistan won by a massive 255 runs.

Sarfraz Ahmed 105 vs England, Lord s: In a wretched innings where Pakistani batsmen recorded 4 ducks, Sarfraz showed quality. He dropped anchor and took Pakistan to a respectable 251, scoring 105 out of those. Pakistan, however, lost by 4 wickets.

Alex Hales 122-ball 171 vs Pakistan, Nottingham: It was an innings full of records. Hales went berserk after England decided to bat at Trent Bridge, and plundered 22 boundaries and 4 sixes. It looked like he would become the first Englishman to score an ODI double-hundred, but Hasan Ali ended his stay in the 37th over. England reached 444 for 3 at the end, now the highest ODI total by any team.

Sarfraz Ahmed 73-ball 90 vs England, Cardiff: Chasing 303 in the final ODI, Pakistan needed an inspired batting performance to prevent England from winning 5-0. Once again, Sarfraz came to rescue as he dropped anchor to score a brisk 90 with 10 fours and a six. He added 163 runs with Shoaib Malik for the fourth wicket, which proved to be a match-winning stand as Pakistan won by 4 wickets.

Babar Azam three consecutive tons vs West Indies: It was a one-man show in UAE when Babar hammered three consecutive tons to defy West Indies all by himself. In the first ODI at Sharjah, Babar scored 120 as Pakistan won by 111 runs via the D/L method. In the second game at the same venue, he scored 123 to help Pakistan win by 59 runs. The action shifted to Abu Dhabi for the final match, where he scored 117 as Pakistan won by 136 runs and claimed the series 3-0.

Quinton de Kock s 113-ball 178 vs Australia, Centurion: Several records were created during this innings. De Kock s century was the second fastest ever in ODIs against Australia, who had put up 294 for 5 batting first. De Kock added 145 runs with Rilee Rossouw, which became the second-highest opening stand for South Africa against Australia. He smacked 11 sixes and 16 boundaries. South Africa won by 6 wickets.

David Miller 79-ball 118 vs Australia, Durban: Centuries from Warner (117) and Smith (108) had powered Australia to 371, and South Africa needed their batsmen to fire. De Kock played a brisk innings of 70 off 49 balls, but it was Miller who took the contest in South Africa s favour with some help from Andile Phehlukwayo. He slammed 10 boundaries and 6 sixes, and South Africa chased the target of 372 with 4 wickets left in hand and 4 balls to spare.

MS Dhoni 80 vs New Zealand, Mohali: It was an innings crucial from India s perspective, since Dhoni had decided to continue at No. 4. Chasing a tricky 286, India lost Rohit and Ajinkya Rahane early. Kohli was going strong, but he needed support. Dhoni teamed up with Kohli to add 151 runs for the third wicket, which closed the doors for New Zealand. Dhoni struck 3 sixes and 6 boundaries but missed out on a deserving century.

Virat Kohli 154 vs New Zealand, Mohali: Of all ODI innings from Kohli in 2016, this was perhaps the best. He played the role of an anchor and denied New Zealand a win along with Dhoni. Kohli remained there till the end to see India finish with a win, and in the process he hit 16 fours and 1 six.

Steven Smith 164 vs New Zealand, Sydney: This is where Australia started regaining their confidence after a string of defeats. Putting behind a sea of disappointment, Smith registered the highest-ever ODI score at SCG. This was Smith s highest ODI total as well, and the seventh-highest from all Australians. 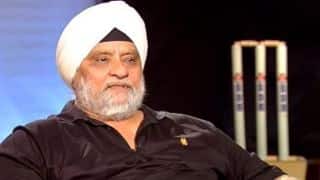