It is not that a cricketer auditions for gentlemanliness to qualify for international cricket. Sachin Tendulkar did not play cricket because he never sledged back. That was his choice and not a criterion for selection.

It is not that a cricketer auditions for gentlemanliness to qualify for international cricket. He plays because he is good at it and not for his benevolence. Sachin Tendulkar did not play cricket because he never sledged back. That was his choice and not a criterion for selection. If truth be told, cricket is not a gentlemen’s game. Had that been the case, West Indies in the 1970s and 1980s and Australia in the early 2000s would have been cast out from playing. Of course, ICC adjudge Spirit of Cricket every year, but that is for other reasons.

There would have been no intriguing stories to tell had cricket not produced controversies. Even the most gentlemanly are trapped in this maze. Kaustubh S. Mayekar lists down the top controversies of 2017.

In a Q & A session during a break of the day-night Test between England and West Indies, Boycott revealed that he was being blocked from getting the knighthood for being a convict in France in 1996 and that he would have to black his face given few of the West Indian greats have the rank of knights.

The comment was followed by an awkward silence. To make matters worse, the diner comprised of several black guests who had paid 300 pounds each for the hospitality package. Of course, it was not taken well: Boycott was later termed ‘dinosaur’.

In a report published by mirror.co.uk, a source questioned: “Is Boycott suggesting these great West Indians got knighthoods merely because of the colour of their skin? Birmingham is celebrated for its ethnic diversity and racial tolerance.”

It was supposed to be a joke, but little did Boycott realise that he would be at the receiving end. He eventually stated an apology via Twitter: “I meant no offence but what I said was clearly wrong and I apologise unreservedly.”

Who does not like a hike? You wait for the appraisal the entire your. If not your major source of inspiration, the hike at least keeps you going. Yes, there are a few employees who think they deserve more. It is a universal story. The Australian cricketers, however, had a pitfall to deal with. They rather fought for equality.

Cricket Australia’s High Performance Manager Pat Howard sent the following letter to the players: “If your contract expires on 30 June, you will not be an employee of CA, a State Association or a W/BBL Team from 1 July. This means that you are not required to play, train, perform player appearances or media commitments, and you will not be paid a retainer until such time as a MOU is agreed and a player contract is agreed with you in writing.”

Australian Cricket Association played as a mediator to resolve the issue, but nothing of that sorts happened anytime soon. Some players had a multi-year contract that stretched beyond June 30 and some did not. As a result, the Australian A team decided to boycott their tour to South Africa given 9 of the 18 players’ contract had expired. The same was the case with the women’s team, but they were already in the middle of 2017 Women’s World Cup.

David Warner never shies away from saying what he feels, be it on or off the field. Emptying his mind to Channel Nine, he said, “Well from July 1 – we’re unemployed. We’ve been threatened with that. But if there’s nothing that’s put in place for what we’re trying to achieve here, from both point of views, we’re not going to tour Bangladesh, there might not be an Ashes if we don’t have an MOU.

We’re not going to budge from the revenue sharing model, we want equality, and a fair share for domestic and female players. In the decades that have gone past, the past players that have been in our situation have stood up for us. I was a domestic player, I was a young kid coming through, we’re doing the same as what they did as well.”

He was not done yet. He fanned the fire posting this:

This is outstanding. Love the humour. @usman_khawajy can you help me.

Obviously, after all this, it was going to be resolved and that the players are happy with it. Former Chief Executive James Sutherland concluded the saga, “This process hasn’t been easy and history will judge if it was all worth it in the end. Neither side has got all it wanted in these negotiations. We’ve reached a good compromise, one that we can both live with.”

Well, if only it worked the same way in the corporate sector…

A boisterous crowd can stop play. Rain is often a spoilsport; it can also be a saviour for the losing side. We have seen dogs and cats intrude. Then there are streakers. Arthropods, too, loom over players, forcing them to lie down. Imagine the terror if honeybees go bonkers (it happened this year, actually). A lot will get bitten, along with the dust (I never realised cricket glossaries can be punned with). Can you think of more ways that can stop play?

In the capital of India (pollution or otherwise), smog stopped play. During the third Test between India and Sri Lanka at Feroz Shah Kotla, Suranga Lakmal threw up on the field due to smog. This forced his team members to wear a mask to protect themselves from “poor air quality”. Ravichandran Ashwin and Rohit Sharma too joined the wagon.

Kohli seemed irked with the situation. If he could score a hundred amidst the pollution, the Sri Lankans shouldn’t have a problem either. Well, according to socialprogressindex.com, the pollution in Sri Lanka is as worse as it is in India. Let us not ignite the doused fire.

“We have been inconsistent with the DRS, but we take our decisions on the field, we don’t ask for confirmation from the dressing room,” a sarcastic Kohli took a dig at the visiting Australians. Here’s the recap:

Steven Smith had an explanation, though: “I got hit on the pad and looked down to Petey [Peter Handscomb] and he sort of said look up there (towards the dressing room), so I turned around and said what do you reckon. It was a bit of a brain fade on my behalf and I shouldn’t have done that.”

Ben stokes a man on his face

Here’s what had happened outside a nightclub in Bristol (the guy impersonating The Incredible Hulk is Ben Stokes).

Stokes was immediately suspended after the incident. Alex Hales, the guy who is trying to stop Stokes in the video, was debarred too.

Eventually Stokes was excluded from the Ashes squad. The case is now has been passed to the Crown Prosecution Service for a decision on charging.

After England conceded the urn to Australia, Michael Vaughan told BT Sport: “I would hope Ben is watching and is hurting more than the team in the dressing room. I said it straight away, I didn’t think England would have any chance of competing out here without Stokes. I hope he’s hurting more than the players who have been here.”

Head-butt, beer, and The Ashes

Jonny Bairstow head-butted Cameron Bancroft in a pub. If you think it hurt Bancroft you are wrong, because he claims that he has one of the heaviest heads and that he has weighed it. No, no, he actually weighed it.

Narrating the incident, Bancroft said that it is Bairstow’s way of greeting people. Here’s the evidence (do not miss Smith’s reaction):

Just wait for Steve Smith​ to absolutely lose it at the end of this video! #Ashes pic.twitter.com/S3UMqBfEZj

That, however, is also how Maoris greet each other:

Bairstow then went on to head-butt his own helmet after scoring a century. He played it down, saying, “It was a bit of light-hearted fun with everything that has gone on and that is exactly how it should be taken.”

Ben Duckett too was suspended for playing a bar prank on his teammate James Anderson (alcohol does not agree with the Englishmen, it seems). To put things into perspective, Duckett poured beer on Anderson. Like with Bairstow’s incident, this too was not malicious. Anderson narrated: “The incident with Ben Duckett was not malicious and was a bit of a non-event but we understand that in this climate we have to be smarter in the future. The frustrating thing is that what was a pretty silly incident would have gone unnoticed before but now puts an unfair question mark over our culture.” 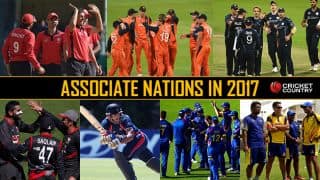 2017 Year-ender: Cricket beyond Tests, even Afghanistan and Ireland 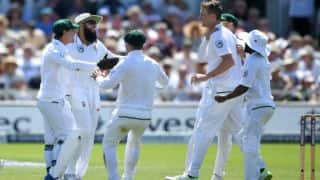