The year 2017 is sure to be etched in the history of Ireland Cricket, as their efforts in the past few years were rewarded with a Test membership.

The year 2017 is sure to be etched in the history of Ireland Cricket, as their efforts in the past few years were rewarded with a Test membership. However, there was more to the year for the team. Let’s walk through their journey.

The Irishmen celebrated New Year 2017 in UAE, playing Dessert T20 Challenge. Though Afghanistan won the tournament, Ireland put up some commendable performances, finishing as the runners-up. Starting with a defeat against Afghanistan, Ireland registered consecutive victories against Namibia and UAE to book their berth in the final. The semi-final against Scotland saw the best of Ireland coming out. Two partnerships were stitched in their innings – between openers Paul Stirling and Stuart Poynter and Kevin O’Brien and Gary Wilson – that took the core to 211 for 6 after 20 overs. George Dockrell and Jacob Mulder then shared 7 wickets between them to topple Scotland for 113, winning the match by 98 runs.

But, Ireland lost miserably to Afghanistan in the final. Mohammad Nabi ran through Ireland’s batting line-up, finishing with 4 for 10. Stirling top scored with 17 as his side crumbled for 71. Mohammad Shahzad (51*) and Nawroz Mangal (17*), who played his final professional match, finished things off easily, registering a 10-wicket win with 13 balls remaining.

Overseas tours and playing in India

A lot more travel was on the cards for the Irishmen. Ahead of a long series against Afghanistan, Ireland stayed back in Dubai for two ODIs against UAE. Porterfield’s 100 and Kevin’s 69 took the score to 270 despite the rest failing. Dockrell once again shone with the ball, bagging a three-for. Backed by Peter Chase and Andrew McBrine, Dockrell helped Ireland bowl out UAE for 185.

UAE batted first in the following ODI to put up a competitive 202. But Porterfield maintained consistency, becoming his team’s leading run-scorer again with his 76. He was adjudged Man of the Match, and was helped by McBrine who picked up 3 for 42 and scored 58 not out to help Ireland win the series 2-0.

The following series was Afghanistan’s first at their adopted home Noida, India. Afghanistan made sure they make it special by winning the T20I series, ODI series and a four-day match. However, they put up a good contest, especially in the ODIs. Afghanistan had won five back-to-back matches in the tour, the three T20Is and the first two ODIs. The third was do-or-die for Ireland. Peter Chase and Tim Murtagh’s bowling helped Ireland restrict Afghanistan at 264 for 8 despite three half-centuries in the innings.

Stirling was unlucky to get out at 99, but his efforts were essential for Ireland as they won the match with 9 balls remaining. Balbirnie’s 85 not-out, too, was commendable.

Ireland won the fourth ODI as well to make the final match a decider. O’Brien, Jacob Mulder and McBrine did not let any of the Afghanistan batsmen score a half-century and bundling them for 220. Ireland’s batting got a shaky start, but O’Brien’s partnership with Gary Wilson got them the required runs.

Though Afghanistan won the fifth ODI, it was a close contest. Despite Rashid Khan and Fareed Ahmad sharing 7 wickets between them, Ireland posted a 230-run target. However, Ireland’s bowling failed to impress in the particular match. Rahmat Shah scored an unbeaten 108, partnering with Samiullah Shenwari (62*) that sealed the match for their side with 8 deliveries to spare.

The four-day match, however, was a one-sided affair. Batting first, Afghanistan put up 537 for 8 decl. Nabi and Rashid picked up 8 wickets each as Afghanistan bundled Ireland for 261 and 104 respectively, winning by an innings and 172 runs.

It started with a couple of ODIs with England in their own den. In the first ODI, Adil Rashid’s 5-for wrapped up Ireland for 126, which the hosts chased down with 30 overs remaining. In the next, they put up a better performance but not enough to chase 329. Porterfield played an impressive knock of 82 but could not save his side from an 85-run defeat.

Bangladesh and New Zealand had to practice for Champions Trophy, and so they visited Ireland for a tri-nation series. Ireland failed to win any of their four matches lined up. However, the series turned out to be a good practice for them to face some fine bowlers and bowl to some intelligent batsmen. Neil O’ Brien’s century against New Zealand has to be one of Ireland’s highlights in the series.

However, Ireland had a reason to celebrate. After playing 10 years of international cricket, they were granted the Test membership alongside a much younger team, Afghanistan. That single event made 2017 a year to remember for Ireland.

Before visiting England, West Indies were supposed to play an ODI with Ireland, but as the rain god has never been happy with cricket taking place in Ireland, the match was washed out. Ireland’s final series before 2018 arrives was a three- ODI series with Afghanistan.

Finishing on a high note

Tim Murtagh and Boyd Rankin shared 7 wickets between them and a batting-heavy Afghanistan were restricted at 238 for 9 in the first ODI. However, what followed was a shameful batting performance from Ireland who were all-out for 100.

But they staged a comeback in the series that needs a pat in the back. Porterfield and Stirling gave the team’s innings a solid start in the second ODI. The middle-order crumbled but Dockrell impressed with an unbeaten 62-run knock down the order that took the team to 271 for 9. Barry McCarthy’s 5-for later handed Ireland a 51-run victory.

In the following match, Dockrell ran through top and middle order while McCarthy took care of the tail. Afghanistan put up a 178-run target in an attempt to win the series. Stirling alone scored 101, and rest of his team finished the remaining task as Ireland won the match by 4 wickets and the series 2-1.

Ending the year on a high note, a confident Ireland would look forward to their much-awaited maiden Test as they step in 2018. A new chapter will begin in 2018 – a chance to live their dream. 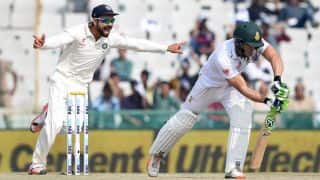