A look back at some memorable quotes from cricketers in 2018.

As 2018 comes to a close, we look back at some quotes that stood out.

“I know he’s your captain but you can’t seriously like him as a bloke.”

Do you baby sit? I can take my wife to the movies while you watch the kids.

Paine chats with Rishabh Pant from behind the stumps

We have a special guest today. Have you ever heard of a temporary captain, Mayank?

“I think Virender Sehwag saved the IPL by picking me.”

I literally stayed up until 1:30 in the morning to watch him cry live on TV. What a pleasure that was.

He can be in 80, in a wheelchair, and he would still play for my team.

AB de Viiliers is a big fan of MS Dhoni

Bowling karega ya bowler change karen? [Are you going to bowl or should we change the bowler?]

I have a lot of cars and bikes at home but I don t ride all of them at the same time.

Dhoni, replying to a question during the IPL on why he didn t bowl Harbhajan Singh

My son is going to speak about it for a long time and in a funny way.

“I’d back Alyssa Healy against the anacondas, the way her form’s been at the moment.”

For the first time in my life, someone had to put on my abdomen guard.

A fractured wrist didn t stop him from going out to bat, but Tamim Iqbal did need some help in the changing room

Asked by a spectator if he had any sandpaper in his pockets, Nathan Lyon gives it back.

I was driving in here and someone stopped me and made me wind down the window to say thank you to me and that was lovely.

At one stage, Hardik hit a boundary and I was in the bathroom. AndI can t hold up there for long.

Ramiz Raja on air, when commentating during a Pakistan vs Zimbabwe match

Dale Steyn on his retired team-mate

Kuldeep would be the perfect role model for a son I would want.

One chinaman bowler to another, Brad Hogg has a soft corner for Kuldeep Yadav 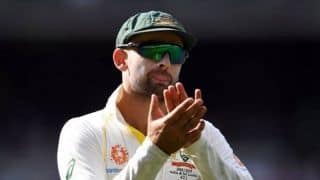