Kane Williamson, AB de Villiers and Kumar Sangakkara make it to the top ranks in the list.

Having consisted the ICC Cricket World Cup 2015, this year was an important one for One-Day International (ODI cricket. Apart from the battle for the coveted trophy, the year was filled with exciting, competitive series in the 50-over format. Often teams’ successes were driven by performances of the batsmen. There were some exciting performers from across the globe who made 2015 a year to cherish in terms of their performances in the ODI format. Rishad D’Souza makes a pick of 10 batsmen that made the most significant mark in 2015. The list takes into account key stats like average and strike-rate along with volume of runs scored. Other factors like context of performances and run-scoring situations are considered, albeit with lesser weightage.

1. Kane Williamson: The diminutive New Zealand batsman has had an absolutely number-heavy year. He’s been sedate in Tests and has re-attested that the classic batsman still can succeed in limited-overs cricket with his volume of runs in One-Day Internationals (ODIs) this year. After an impressive start in the year, he had a rather lean patch in the ICC Cricket World Cup 2015, but found his groove soon after. He got back to his proficient run-scoring in the series against England and maintained that tempo through the course of the year. He finished as the top run-scorer in 2015 with 1,317 runs to his name at an average of over 57.

2. Kumar Sangakkara: The Sri Lankan legend was in supreme form in 2015. The ICC Cricket World Cup 2015 was his final ODI assignment before retirement, but the stalwart made sure he left his mark on the tournament. Most famously, he’ll be known for scoring four consecutive hundreds in the course of the tournament, which is a world record. That was a record not only in World Cup cricket but an unprecedented ODI feat. In just, 14 games in the year he added five hundreds to his name and closed with a staggering 862 runs at an average of 86.20. Couple that with a strike-rate of 102 and one knows why Sangakkara merits the ‘legend’ tag.

3. AB de Villiers: The South African skipper definitely knows what it means to lead from the front. AB de Villiers has been phenomenal in ODIs in 2015. He has scored 1,193 runs at an average of almost 80 with an unbelievable strike-rate of 137.91 to go along. His style of batting is unique with shots in his repertoire to kiss all parts of the ground. His heroics in this year and through his career have earned him tags such as superman and Mr. 360 among others. Apart from a prolific World Cup campaign, he was the top-scorer in the away ODI series against India and was instrumental in his team overcoming the hosts 3-2. His year of supreme batting was highlighted by him comfortably surpassing the records for the quickest hundred and the quickest 150 in history of the game.

4. Soumya Sarkar: This youngster from Bangladesh is destined for great things if his performances in 2015 are anything to go by. His classy technique and patience combined with an ability to pick the right balls to hit yielded a haul of 672 runs for him from 15 games at an average of 51.69. He had a relatively ordinary ICC Cricket World Cup 2015 in general but gave a glimpse of his potential in a crucial fifty he scored against New Zealand. In the series’ following the World Cup, that potential started taking form. He scored a fantastic unbeaten 127 against Pakistan, following it up with handy scores against India in successive bilateral series. He then scored heavily in Bangladesh’s series-triumph over South Africa. It is safe to say that he was instrumental in his team beating three top-ranked countries in successive ODI series.

5. Tillakaratne Dilshan: Dilshan is the other Sri Lankan that merits a place on the list. After the dual departures of Sangakkara and Mahela Jayawardene, he has been the pillar of strength for the side in ODIs. Not only does he bring great experience to a young, largely unexposed side but it also setting an example as to how to get the job done. He scored 1,100 runs in the year at an average of 55. In the ICC Cricket World Cup 2015, he produced a yield of 395 runs from seven games at an even better average of 66.

6. Martin Guptill: Guptill makes the list on back of some highly impressive innings reconfirming his status as a fine ODI batsman. He scored 1,287 runs in the year at an excellent average of 51.48. Moreover, the highest individual score in the year is to his name. He smashed an unbeaten 237 against the West Indians in the ICC Cricket World Cup 2015 quarter-final, which is also an all time World Cup high. The New Zealander finished as the top run-scorer in this edition of the World Cup.

7. Tamim Iqbal: Bangladesh had an unbelievable year in ODI cricket. They not only knocked England out of the ICC Cricket World Cup 2015  but also beat top teams like India, Pakistan and South Africa in bilateral series at home. Iqbal was integral to these new highs that Bangladesh reached. In all, he scored 742 runs in the year at an impressive average of 46.37 with a handy strike-rate of 81.62. He was often responsible to set Bangladesh a solid platform at top of the order. He scored heavily in the series against Pakistan and chipped in with useful scores against India and South Africa too.

8. Faf du Plessis: The South Africans had a fantastic year in ODI cricket. They thrashed West Indies early in the year at home and won away series against a New Zealand and India among other achievements at the World Cup and otherwise. Faf du Plessis was integral to these efforts. While de Villiers was responsible for blistering knocks, du Plessis gave stability to the line-up. In 20 games, he scored 884 runs at an average of 58.93 and a decent strike-rate of 82.92.

9. Shoaib Malik: Malik is the only player that makes this list without having played the ICC Cricket World Cup 2015. Malik was not even in contention for ODI selection for a long time but when he got an opportunity he grabbed it with both hands. In the 15 matches he played in 2015, he scored 607 runs at an astounding average of 67.44 and a strike-rate of 108 to go along! He was an absolute gem to watch and exhibited a level of consistency one can expect only from the best.

10. Rohit Sharma: India have been rather ordinary in ODIs this year. It began for them with a pathetic tri-series performance in Australia against the home team and England. And the trend continued into the home series against South Africa which was their last ODI series in 2015. Their World Cup campaign was quite neat but was a disastrous year otherwise. Nevertheless, Rohit Sharma was in sublime form with the bat. He scored 815 runs from 17 games at an average of 50.93 and an impressive strike-rate of 95.4. He left nothing to be desired except perhaps a bit more consistency. 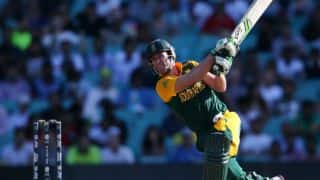 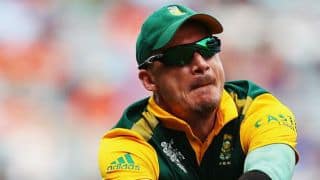 2015 Yearender: Top 10 catches across cricket formats in the year