2016 gave us many thrilling matches in the shortest format. Here's a list of top 6 T20Is.

Curtains are almost down for 2016. The year, however, boasted of some of the most gripping episodes of cricket. The early half saw a number of T20 games being played in a bid to prepare for the ICC World T20 2016 that took place in India, in during summer. Apart from the event, we also witnessed Asia Cup T20 and other bilateral T20I series, which exhibited some noteworthy matches. Teams such as India, West Indies, Australia, South Africa and Pakistan performed as expected but it also saw teams such as Ireland, Bangladesh and Oman prove their mettle.

Let’s have a quick read about these matches:

1. England vs West Indies, WT20 Final: Chasing 156 runs to win, West Indies were playing cat and mouse with England, especially Ben Stokes, who kept tightening the noose. Leg-spinner Adil Rashid got his line and length right, which further strengthened their cause. Marlon Samuels, nonetheless, held the fort for West Indies and showed why is a proven statesman, keeping one end of the crease tied up.

With the fall of Darren Sammy in the fifth over, all hopes of West Indies emerging triumphant looked bleak. With that, England bowlers started to breathe a sigh of relief. But destiny had other plans. In came Carlos Brathwaite. His first 10 runs came off 6 balls. All the same, when the final over started with West Indies needing 19 off 6 balls. England captain Eoin Morgan handed the ball to Stokes.

Brathwaite bludgeoned Stokes for 4 sixes in a row (backward square-leg, long-on, long-off and deep midwicket) to hand West Indies their second WT20 title. The match saw a number of emotions — anger, joy, guilt and heartaches — that only described what the game does to players as well as its fanatics.

2. India vs West Indies, 1st T20I, USA: With all the hype around India playing its first ever match in the USA, the first T20I surely lived up to its build-up. West Indies, the T20 champions, took on India with an almost rejiggered side that was expected to bow down against an experience-driven side.

Batting first with the help of Johnson Charles and Evin Lewis, West Indies rocketed their way to a mammoth 245. Lewis, fresh from a good show in Caribbean Premier League, announced himself on the world stage with an intimidating 100 off 49 balls, in alliance with Charles’s 33-ball 79.

India, in reply, started poorly losing Virat Kohli and Ajinkya Rahane early into their innings. KL Rahul, who was commendable in IPL 2016 batted with brute force and dominated the West Indies bowlers at will. Rahul, along with Rohit Sharma, combined to add 89 runs. It was skipper MS Dhoni and Rahul that almost won India the match with a 107-run stand.

However, it was in the final over that Dwayne Bravo rose to the occasion and restricted Dhoni from scoring the winning runs, to hand his side a win by 1 run.

3. South Africa v England, Super 10, WT20: Touted as one of the best matches in WT20, both South Africa and England played out of their skin. South Africa, powered up by half-centuries from Hashim Amla, Quinton de Kock and JP Duminy, rallied to an imposing total of 9 runs. De Kock, in particular, bashed the England bowlers out of Wankhede with no remorse during his knock of 52.

In reply, England started strongly with Jason Roy going all guns blazing. Roy stay lasted just 16 alls but produced 43 crucial runs in the process. Soon it was the Joe Root show. He used every cricketing shot in his arsenal to get to a 29-ball 50, which helped his side near South Africa’s total. Root eventually got out on 83, but did his job, as England required just one run off the last over.

Kyle Abbott ensured England did not have it easy, picking back-to-back wickets. It was only on the fourth ball that Moeen Ali took a jumpy single towards long-off, handing England some life.

4. India vs Bangladesh, Super 10, WT20: A match that belonged to Bangladesh ended up falling into the hands of the Indians. With only 2 to get off 3 balls, Bangladesh batsmen lost their cool, especially Mushfiqur Rahim, who bore the brunt of an agonizing defeat. Needing 147 runs to win on a flat deck at Bangalore, Bangladesh looked in control.

MS Dhoni called upon Hardik Pandya to bowl the final over with only 10 runs to defend. Rahim cashed in two loose balls from Pandya for boundaries to bring down the target to 2 from 3. Rahim, trying to hero his way for Bangladesh, holed up at midwicket and gave the match away, as Mahmudullah perished in a similar fashion the next ball.

Dhoni and his nibble hands did all the work in the end to inflict a run out on the very last ball, handing India a one-run win and a chance to stay alive in the tournament.

5. Oman vs Ireland, Qualifier, WT20: Ireland, who already have a reputation of being the team to cause an upset, were given a taste of their own medicine when Oman edged past them by 2 wickets. Ireland batsmen added 154 runs in their 20 overs, with the help from seasoned players such as Gary Wilson, William Porterfield and Paul Stirling.

Oman got off to an exhilarating start, adding 69 runs with Zeeshan Masood and Khawar Ali racing into their 30s. Soon, Ireland struck and had Oman reeling down defeat at 90 for 5. Out of the blue comes in the 38-year old Amir Ali and starts smashing balls straight past the boundary line.

Ali made a 17-ball 32 that included 5 fours and one six that helped his team get over the line with 2 balls and 2 wickets to spare, making this a memorable affair with WT20 still in its qualifying stage.

6. England vs Sri Lanka, Super 10, WT20: With a spot in the semis up for grabs, England — banking on their explosive top-order batsmen — blasted their way to a challenging total of 171 runs on a slow and low Delhi wicket. Sri Lanka had a horrific start, losing 4 wickets for just 15 runs, with only Angelo Mathews and Thisara Perera left to bat.

Mathews, not the one to bog down, had played one of the most fluent and crafty innings of his career so far. Mathews found good support in Chamara Kapugedera, who added 30 runs to his team’s cause in a stand of 80. Perera rallied around his skipper, but perished making an 11–ball 20.

Mathews, mind you, had problems with his hamstring all this while, but somehow played through pain. With 15 runs needed off 6 balls, Eoin Morgan brought on his trusted death-over specialist Ben Stokes, who completed the task for England. Stokes bowled excellent yorkers to keep a wounded Mathews under check, as Sri Lanka fell short by 10 runs. 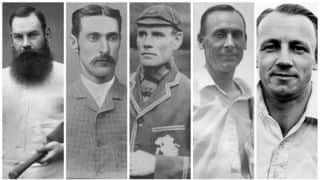 Celebrating New Year: How five of the greatest cricketers did it