Brendon McCullum, Darren Sammy and Shivnarine Chanderpaul are among the big names that walked away from cricket this year.

No, Shahid Afridi did not retire. Before we begin and recall what is going to be long list of cricketers to have retired this year, it is important that to get facts right as far as Afridi is concerned. Famous in cricketing circles for his antics when it comes to retirement is concerned, Afridi remained in the news anyway for quite some time around ICC World T20 2016. A lot was reported over his retirement which has been impending for years, but the closest he came to it was after the tournament in which Pakistan performed horribly under his captaincy and bowed out post the first round.

Afridi had promised to retire following World T20, but wished for a grand farewell too. PCB did not budge, and the ‘Afridi Retirement Drama’ ended up hitting a roadblock. That was that. Since then, Afridi has been flocking around various franchise-based T20 leagues, but neither he nor PCB seems to bring up the subject, perhaps thinking that any discussion on the topic may end up bringing some sort of misfortune to Pakistan cricket. Anyway, let us move away from Afridi and retirement and take a look at the list of players who meant it when they said they would walk away:

Brendon McCullum: Baz had announced in 2015 itself that the home series against Australia would be his last. He decided to sign off in style, which he did, slamming what stands as the fastest Test century, against Australia at Hagley Oval, off 54 balls. In ODIs, he hammered a 27-ball 47 in his final match. The timing of McCullum s retirement remained debatable as New Zealand were expected to miss their daredevil batsman in the World T20 a few weeks later. However, New Zealand did well in the tournament by reaching the semi-final.

Shivnarine Chanderpaul: Chanders fell short of Brian Lara s tally in Test cricket by a mere 86 runs, finally giving up hope of making a comeback. Seven months after he was dropped from West Indies team, Chanderpaul made an official announcement that he has retired. Chanderpaul continues to grace First-Class cricket with familiar run-making ability, but all such appeals will fall on deaf ears perhaps.

Darren Sammy: The question over Sammy s retirement still lingers on, since there was no formal announcement barring a Facebook Live video. However, Sammy s exit cannot be rued as much as it is heartbreaking to live with the circumstances in which he walked off.

Sammy got together a bunch of 15 cricketers and the support staff, fought internal battles with WICB and emerged victorious. Sammy s West Indies won hearts and the World T20, but his outburst against WICB after the tournament s final saw the end of a fine leader, if not a great cricketer. Sammy s captaincy remained extraordinary in a campaign wherein West Indies did not have many supporters.

In August, Sammy posted an emotional video on Facebook informing he will not be West Indies T20 captain anymore. During a 30-second phone call from the chairman of selectors, Sammy was told his performances did not warrant selection. The World T20 win was not enough for West Indies selectors since they opted to see Sammy s eight runs and one wicket in the tournament which they won under his leadership, for the second time.

Shane Watson: The Ashes 2015 debacle had already ended Watson s Test career, and in September that year, he announced retirement from ODIs. Watson carried on till the World T20 in India and quietly slipped into the league of those Australian cricketers whose exit marked the end of a generation. Australia crashed out of World T20 after the first round.

Preston Mommsen: The retirement of a fine cricketer at 29 could not have come with any further grave warning for the sport s caretakers. Mommsen s exit from Scotland cricket to a more lucrative offer warned cricket that unless the administrators change their medieval ways of running cricket, there will be further such instances.

Tillakaratne Dilshan: Despite his good form, Sri Lanka chose to focus on the future and pressured Dilshan to retire. The idea was to make a young team and give them time to find feet. Dilshan fought for his place till the end, but after two ordinary outings against Australia in ODIs at home, he decided to walk away.

Rangana Herath: The veteran spinner retired from limited-overs cricket in April 2016, wanting to prolong his Test career. The decision looked spot on when he breathed fire in the home series against Australia, inflicting a 3-0 whitewash of the then world No. 1 side. Later in the year he led Sri Lanka for the first time.

Grant Elliott: Elliott was brilliant for New Zealand in the 50-over World Cup in 2015. However, when New Zealand were knocked out of ICC World T20 in India this year, Elliott announced that he would not play in ODI cricket. He has not played for New Zealand since.

Nathan McCullum: The older of the two McCullums had walked away from international cricket at the end of the previous season for New Zealand. Nathan played his last game for New Zealand in the World T20, claiming 1 for 6 from 2 overs.

Ravi Rampaul: For unknown reasons, Rampaul was not named in the West Indies party for the last 50-over World Cup Down Under. While many in the Caribbean have taken their unceremonious exit to heart, Rampaul chose to quietly slip into a Kolpak deal with Surrey, effectively bringing an end to his international career for West Indies.

Richard Levi: Levi still holds the record for the fastest T20I century, off 45 balls. However, he signed a Kolpak deal with Northants. Levi played all of his 6 T20Is for South Africa in 2012.

Lakshmipathy Balaji: Tamil Nadu s smiling assassin called it quits from First-Class cricket in September. In the previous domestic season he had stayed on as a player-coach, which signalled that the veteran of 30 ODIs and 8 Tests will continue to remain associated with the sport.

Jerome Taylor: Immediately after his omission from the Test squad against India, Taylor informed WICB that the journey for him is over as far as Test cricket is concerned. Taylor continues to play in other formats for West Indies.

James Taylor: It was one of the most unfortunate retirements of this year. Taylor, fixating himself as one of the key members of the English Test side, discovered that he was suffering from a serious heart condition, which forced him to announce retirement. Taylor now works as a cricket commentator and expert.

Ryan Campbell: A Western Australian who played two ODIs for Australia in 2002, Campbell returned to international circuit for Hong Kong in the ICC World T20 2016. He played 3 T20Is for Hong Kong, 14 years after his last international appearance. Campbell announced his retirement from domestic cricket in January 2016. 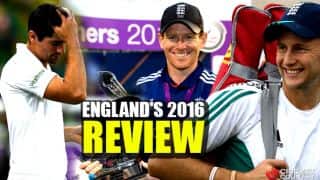