From the Sri Lankans turning up with masks on the field to Ben Stokes being hit on the face with a ball by a ball boy, here are the bizarre moments in cricket from the year.

2017 witnessed many brilliant knocks and spells, but it also had its share of bizarre moments. From the Sri Lankans turning up with masks on the field to Ben Stokes being hit on the face with a ball by a ball-boy, here are the bizarre moments in cricket from the year.

Old habits die hard: For India, the year started with MS Dhoni stepping down from captaincy of limited-overs. However, his experience behind the stumps still makes him an expert in taking reviews. Playing his first match as non-captain in almost a decade, Dhoni for some moments forgot that he is not the captain anymore and went for review against umpire s call of not-outs!

Ball boy hits Ben Stokes on the face: We are sure that this was not intentional but then, it was so bizarre it made to our list. During the ODI series in India, as Stokes was fielding near boundary, the ball went past the ropes. Stokes was chasing it and as the ball boy picked up the ball and threw it back in field, Stokes got it on face. It was probably an indication for the Englishman that the year was going to be rough for him.

Brain fade : After being given out by on-field umpire, Steven Smith turned back to walk off the field but suddenly stopped, looked at the dressing room and took a review. The incident was amongst the most controversial events of the year and Smith was criticised massively. The Australia captain went on to call the incident ‘brain-fade’ and apologised saying he should not have done it.

Bees stop play: Sri Lanka were in South Africa for a full tour. During the ODIs, the game was stopped for one of the least expected reasons bees. At Johannesburg, cricketers of both the sides had to lay down to avoid sting of hundreds of bees that invaded the ground. They were finally trapped and released outside by an innovative idea of a groundsman, who placed a box of honey to attract them.

Ishant Sharma, Steven Smith s mirror game: In a high-intensity series such as the Border-Gavaskar Trophy, it is easy to lose cool. Some throw bat, some abuse under such situations but Ishant decided to make a face that had no explanation. Smith, clueless of how to reply to the bowler s behaviour, aped him immediately, and Virat Kohli could not help but laugh!

Virat Kohli in splits after Ishant & Smith mimic each other https://t.co/6rXJL197Xw

IPL s eight inauguration ceremonies: IPL has successfully blended cricket and Bollywood, organising glamorous opening ceremonies every year. However, IPL 2017 had an overdose of glamour as a total of eight ceremonies were organised; one each for all the first matches at the eight venues. This not only became boring but time-consuming as well.

Sunil Narine, Sanjay Manjrekar s WG Grace: Commentators often draw comparison of current cricketers with yesteryear greats. However, Manjrekar took that to another level, calling Sunil Narine WG Grace as Kolkata Knight Riders belted 105 runs in the Powerplay against Royal Challenger Bangalore. Manjrekar was served with his share of trolls on social media for that!

Rohit Sharma sleeps: While Ishant chose the weird facial expression, Rohit Sharma s way of dealing with the pressure was to sleep! During the final of IPL 2017, the Mumbai Indians captain was seen dozing off at the dugout. That did not hamper his alertness though as he went on to lift the third IPL title for his side.

Car drives into pitch: Cricket matches have been stopped for many weird reasons, but due to a car driving into the pitch for the first time in a First-Class match. It took place during this season of Ranji Trophy, during a match between Delhi and Uttar Pradesh at Palam.

Ben Stokes saga: Ahead of their most exciting assignment of 2017, The Ashes, England faced a blow as Stokes was involved in fighting. A CCTV footage was released where Stokes is seen punching a couple of strangers. The incident resulted in Stokes earning a ban and led to his exclusion from The Ashes. What is even more bizarre is, during the incident, Stokes England teammate Alex Hales was present with him. After the scene, he drove far away and played golf instead of informing anyone!

Jonny Bairstow s headbutt: After Stokes incident, Bairstow pulled off something that must have disappointed captain Joe Root more. Bairstow greeted Cameron Bancroft, as described by Bancroft himself, with a head-butt. The weird incident took place in a Perth bar. Moreover, talking about it, Bancroft mentioned he has the heaviest head in Western Australia squad, though we are not sure how this information was relevant! [P.S: Notice Steven Smith laughing beside Bancroft]

Ben Duckett pours beer on James Anderson: Controversies seemed to have loved England a bit too much in 2017. Duckett joined the bandwagon, and got himself suspended from England Lions matches after pouring beer on the national vice-captain James Anderson, at a pub.

The masked men: Delhi pollution and smog had earlier created many troubles and the latest addition is Sri Lanka cricketers complaining about uncomfortable conditions. However, their act of turning up wearing masks while fielding surely goes down as one of the bizarre incidents.

Rohit Sharma s love for spider-cam: Rohit surely was a threat to Sri Lanka in the series, for the batsman he is. He also managed to become a threat to the spider-cam, playing with it whenever there was a break and it was in his vicinity.

Umar Akmal says he is alive: And the year ended with a gem, from our favourite Umar Akmal. Twitter was abuzz with a photo saying Umar Akmal was dead. He soon made a video, proving it was a fake video. 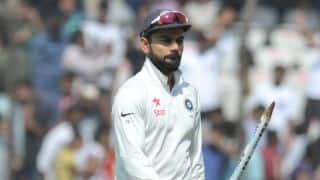