If truth be told, the war-hit country do not have haters in this line of work. And if they keep playing cricket in this part of the world, the Nabis, the Shahzads, the Shenwaris, the Rashids, among others will soon be household names, because yo Afghanistan cricket so cool.

Chetan Sharma and Ajay Mehra start commentating in Hindi. The diction is clearer than the commentators we saw during the India-Australia Test at Bengaluru. Then comes former India Women’s team captain Anjum Chopra. She starts describing colossal, into-the-orbit sixes in English. An over finishes. The wicketkeeper changes ends. But commentators still keep analysing the match, for there are no advertisements. The match is being aired on Doordarshan Sports. The memories of watching matches on black-and-white TV sets in 80s and 90s are revived. If anything, the contest makes us nostalgic. But if only we see Nirma or Lux advertisements between overs…

The match is being played at Greater Noida Sports Complex. It does not even have a roof. There is not even a screen to display the TV umpire’s decision. Instead, there are the parallelly-placed, age-old green and red lights. The batsman falls short of the crease, the red light blazes, and the crowd bursts into cheer.

By the looks of it, this is an India match and its spectators are celebrating the fall of an opposition team’s wicket. The first innings comes to an end. The team people had come in good numbers to support for needed 166 to win.

Check out the atmosphere here at Greater Noida during innings break of 1st T20 between #AFGvIRE clash pic.twitter.com/mkoqiGWYr5

However, India do not have a player named Shahzad. If anything, this may be a domestic match. Shahzad must be a local player from Greater Noida. There is a feeling of familiarity. These are signs of Indian cricket: the channel, the commentators, the venue, the spectators, the atmosphere, the excitement.

Shahzad hits another four, then a six, then runs hard between the wickets despite being cutely oversized. He is the same Shahzad who had hit a six and four off Kagiso Rabada, three sixes and a four off Kyle Abbott, then again a six and four off Rabada. This is the same Shahzad who had obliterated South Africa in WT20 2016 at Wankhede Stadium, Mumbai. He had donned Afghanistan’s jersey.

It’s time ‘Boom Boom’ tag should be replaced from Pakistan to Afghanistan. #AFGvIRE

The match in Greater Noida did not feature Team India or any of the cricket-crazy nation’s domestic team. The spectators did not support its countrymen on their own soil. They had come to watch Afghanistan lock horns with Ireland in the series opener of the three-T20I series.

This is Afghanistan cricket. They are cheered all over the world. All the same, to be supported in a nation that still chants Sachin Tendulkar’s name is special, very special.

“We are more than happy to host Afghanistan, who have shifted their base to Greater Noida from Sharjah, their earlier home ground. Uttar Pradesh chief minister Akhilesh Yadav was very keen on offering the stadium to Afghanistan. He had directed us to make modifications in the stadium as suggested by the cricket experts to make it an international ground. We prepared the stadium and the pitch in a shot span of time, because the UP government wanted to grab this opportunity,” Rama Raman, chairman of Greater Noida authority, told Hindustan Times. Yes, you read it right. An Indian city is now Afghanistan cricket’s new home.

Afghanistan won the match by 6 wickets. They chased down 166 with 2 overs remaining. Samiullah Shenwari was adjudged Man of the Match for his swashbuckling 36-ball 56 inclusive of 6 fours and 3 sixes. The certain Shahzad bludgeoned 47 off 41. And then Shafiqullah finished things off in style, hitting the winning runs with a six over deep mid-wicket.

“First game of a series is always important and starting with a win is very crucial. I’m happy with the win,” said captain Asghar Stanikzai at the post-match presentation.

Amidst all this, the crowd gathered around a WWE wrestler Khali-lookalike personality. Some of them even asked him for photographs and some selfies. Then, there was a moment when the scorers got the math wrong. The contest was stopped for a while. The suited and booted men, in the stadium, standing in a line, checked their smartphones for scorecard. The players had a laugh. So did the umpires. Everyone took it in the right spirit, keeping the gentlemanly nature of the game alive.

Come to think of it, T20 injected more zeal into Associate Nation’s cricket. If not after every 4 years in World Cup, we see them showing off their skills in World T20s. To make matters more demanding, it is good to see Associate Nations battle in a bilateral series, and that too in a nation that has made cricket its religion. In fact, this encounter had more spectators than the ongoing Test between Sri Lanka and Bangladesh at Galle.

Above all, again, this is Afghanistan cricket. They had beaten eventual winners of WT20 2016 West Indies in the group matches. The certain Shahzad ranks No. 7 in ICC T20I Rankings for batsmen. Two of their players Rashid Khan and Mohammad Nabi will play in the upcoming IPL 2017. While the former ranks No. 5 in the bowlers’ rankings, Nabi is placed at 4 in the all-rounders’ list.

It has been only 7 years since they started playing international cricket. If truth be told, the war-hit country do not have haters in this line of work. And if they keep playing cricket in this part of the world, the Nabis, the Shahzads, the Shenwaris, the Rashids, among others will soon be household names, because yo Afghanistan cricket so cool. 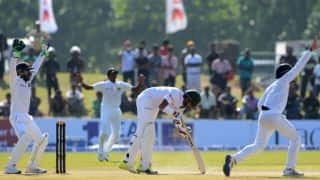