Daryl Harper, the umpire, declared a wide, but didn't realise the bails were off.

October 22, 2000. Yuvraj Singh, still new to international cricket, was beaten down the leg by Travis Friend. Daryl Harper called it a wide before Steve Dunne made a stunning discovery. Abhishek Mukherjee recalls an unusual umpiring blunder.

The Coca-Cola Champions Trophy of 2000-01 at Sharjah started off with Sri Lanka triumphing over India by a 5-wicket margin. They dished out a 7-wicket thrashing to Zimbabwe next day. India and Zimbabwe met on the third day of the tournament.

Zimbabwe were a competitive outfit at the turn of the millennium, making it to the Super Sixes of World Cups 1999 and 2003. India were without the services of Anil Kumble, which meant that it was certainly not going to be a pushover for India. In fact, Zimbabwe certainly looked favourites after Heath Streak put India in and had Sachin Tendulkar caught-behind early.

Rahul Dravid, promoted as opener, played a solid innings as Vinod Kambli and Sourav Ganguly helped him take the score to 93 for 3. Travis Friend claimed both wickets, and it was not until a teenager Yuvraj Singh took the bull by its horns that India started accelerating.

Yuvraj hit a four and 2 sixes to reach 34 in a 61-ball stand of 54. Then Friend bowled one that seemed to go down leg, straight into the gloves of Andy Flower. Daryl Harper called a wide. If it had been a touch too harsh, the Zimbabweans did not react.

Fortunately for cricket, Steve Dunne was standing at square-leg. It was Dunne’s 89th One-Day International (ODI), which meant that he was now ahead of Steve Randell’s 88. Only David Shepherd (97) had stood in most ODIs at this point of time.

What followed was bizarre. Wisden reported: “Umpire [Daryl] Harper called wide — only for his colleague [Dunne] to notice that the ball had dislodged Yuvraj Singh’s bail.” Indeed, the ball had clipped the bail. The decision had to be overturned, and Yuvraj had to leave.

Dravid (85) was the only Indian to go past 35, but there was some lusty lower-order hitting from Vijay Dahiya, Sunil Joshi, and Ajit Agarkar: between them they scored 63 from 42 balls, and India finished on 265 for 8. Friend finished with 4 for 55.

Zaheer Khan bowled both openers, reducing Zimbabwe to 32 for 2. But Stuart Carlisle and Andy Flower added 118 for the third wicket. There was another crucial 49-run stand between Grant Flower and Guy Whittall from 49 balls, but it was not good enough. Zaheer came back to remove Dirk Viljoen, and despite some aggressive batting from Whittall and Streak Zimbabwe lost by 13 runs.

– Sri Lanka won all 4 matches. India managed to pip Zimbabwe to reach the final thanks to a late blitz from Joshi and Agarkar. The sixth league match saw Muttiah Muralitharan rout India with 10-1-30-7.

Man of the Match: Zaheer Khan. 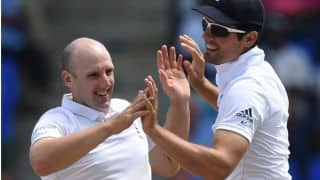