In one of the most emotional moments in Indian cricket, Yuvraj Singh returned to the side and batted like the man everyone knows. Arunabha Sengupta retells how the match was lost, but the battle with death was won. 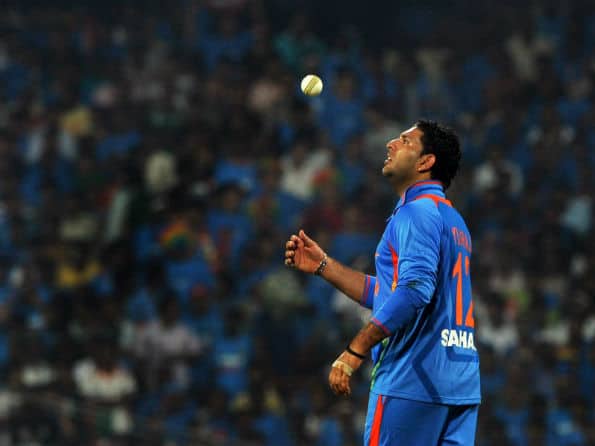 India were pipped at the post by a run, but the side had won back something much more valuable that had been on the brink of being lost forever. The nation rejoiced as Yuvraj Singh (above) showed why he is a true warrior © AFP

In one of the most emotional moments in Indian cricket, Yuvraj Singh returned to the side and batted like the man everyone knows. Arunabha Sengupta retells how the match was lost, but the battle with death was won.

Dreams sometime do come true. But traversing from the darkness of nightmares to the most glorious light of rejoicing triumph is a fairytale. Yuvraj Singh walked almost the full stretch of the rainbow.

The nation had followed his struggle with the deadliest of foes, negotiating the toughest period. The heart of every cricket fan had thudded with concern as he battled for his life – the golf ball sized tumour lodged in him.

Social media, especially Twitter, made it possible for the world to follow his progress. Pictures were shared – the instantly recognisable face suddenly unfamiliar with all the vanishing hair. Millions wished him well. Did that play a part? We will never know.

And then, he returned, first to life and then to the team. Would the selectors take the chance? Play him without a single game?

But they did. Emotions for once ruled the mind; the team was selected from the heart, not the head. Not too many complained.

Millions stood by as the first match was washed off – the curious joke of fate.

Finally, the day arrived when he took the field. And what a welcome he got! It was an ovation greeted thus far reserved, in the annals of Indian cricket history, only for Sachin Tendulkar.

He walked out to bat at 86 for two … with a small gesture of gratitude to that supreme adjudicator of all games.

Off the seventh ball, he was dropped. Yes, a small smile of fate after the long months of the set faced grimness. The first six sent the fans on raptures of ecstasy – over wide long on off Daniel Vettori. This was the man everyone knew. The game had welcomed him back with open arms.

As the chase grew hot, he lofted Jacob Oram into the stands over mid-wicket. Perhaps it looked like one of the sixes off Stuart Broad, or perhaps our emotions played tricks with memory. We don’t know for sure. Only it was time to be ecstatic – the old warrior was back!

And finally, with three balls to go and four runs to get, it had almost played to the script, but for the final bit which makes all the difference. The swing could have gone for glory, but it ended in the ball crashing into the stumps. The last roll of the dice had not been in his favour. Cricket does not owe anyone a happy ending. He walked back for a 26-ball 34.

However, the slot that looked vulnerable for the T20 World Cup now looks cemented and settled.

India were pipped at the post by a run, but the side had won back something much more valuable that had been on the brink of being lost forever.

Never mind the result. On the stage of Chidambaram Stadium where this fascinating tale of life and death was being played under lights, in the guise of cricket, one look at the smile on the face of Yuvraj Singh’s mother, Shabnam, and one went home a winner – sublime joy that can never be produced by action on the field.