India have found a resourced three-pronged pace attack. The ICC Champions Trophy 2013 featured Bhuvneshwar Kumar, Umesh Yadav and Ishant Sharma in all the games, but it was the spinners who proved to be the game-changers for India. Is that good news for this young Indian side looking ahead to the 2015 World Cup, knowing that they will be the title favourites? Shrikant Shankar looks at a now slightly forgotten man, who could yet have one last spell to bowl for India — Zaheer Khan. 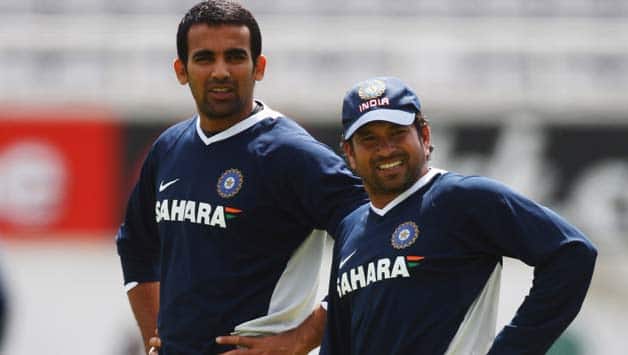 India have found a resourced three-pronged pace attack. The ICC Champions Trophy 2013 featured Bhuvneshwar Kumar, Umesh Yadav and Ishant Sharma in all the games, but it was the spinners who proved to be the game-changers for India. Is that good news for this young Indian side looking ahead to the 2015 World Cup, knowing that they will be the title favourites? Shrikant Shankar looks at a now slightly forgotten man, who could yet have one last spell to bowl for India — Zaheer Khan.

The scene was set as England needed 41 runs to win the third Test against India in 2012 to take an unassailable 2-1 lead in the series. Out walked England openers — Alastair Cook and Nick Compton into the middle of the Eden Gardens. MS Dhoni handed the new ball to Ravichandran Ashwin. Then Pragyan Ojha shared the new ball with him and the two spinners took three wickets to mildly delay the inevitable. Zaheer Khan, India’s pace spearhead for the best part of the last 12 years, did not get to bowl. Matt Prior stands as his last Test wicket till now, and that was in the first innings of that match in Kolkata. Zaheer was dropped for the fourth and final Test in Nagpur as Ishant Sharma automatically took over the mantle. The series was lost and a new era beckoned in Indian cricket.

India won the following Test series against Australia 4-0 and as mentioned above won the last edition of the Champions Trophy. Bhuvneshwar, Umesh and Ishant are the trio that worked well together in England. But make no mistake, they were not the stars with the ball; the spinners were. India are currently the top-ranked One-Day International (ODI) team  Their victory in the Champions Trophy has only reaffirmed their stature as realistic hopefuls for the World Cup crown which they will be defending in 2015. One could probably imagine India’s starting XI in two years’ time. Seven or eight of the current team may have entrenched their places. But one thing is for certain: when it comes to the fast bowling department, there will only be wishful thinking.

The one constant for the good part of the last decade in the fast bowling department was Zaheer. Others came and left without cementing their places. Bhuvneshwar is a rank swing bowler without much pace. The real test will come on wickets that offers little or no help for his art. Umesh has pace, but can be erratic. Consistency and staying away from injury will be his main concerns. Ishant, the so-called leader of the pack, is a hit-the-deck-hard type of bowler. Again his issue is lack of consistency and injury. India have three different type of fast bowlers, which is good. There are interesting back-ups as well. Shami Ahmed and Irfan Pathan offer something different. So what is missing?

It is not experience as Ishant and Irfan have been in the Indian setup long enough to be wise heads. That’s the answer though — wise heads. Experience counts for little if it does not give wisdom. Zaheer came into the Indian side with a lot of fire in the belly and aggression. One Adam Gilchrist and Ricky Ponting innings in the 2003 World Cup final took the wind off his sails. He lost his confidence. Then he became a squad player before being dropped. Zaheer made the wise choice and went to Worcestershire in the English County Championship. He returned a changed bowler. He became India’s bowling spearhead, let alone pace spearhead, for the coming years.

His career highlight came against England in the second Test at Trent Bridge, Nottingham in 2007, where he picked up nine wickets in the whole match. This led to India’s historic 1-0 series win over England. He picked up 18 wickets in the three-match series and was later named one of Wisden Player of the Year in 2008.

His contributions with the ball continued as India became the top-ranked team in Tests. The most important aspect of Zaheer’s bowling was the way in which he got the old ball to reverse. It made him a menacing prospect. The bouncer was used as a secret weapon. Zaheer’s bowling lost some yards of pace, but there was a lot of purpose in every delivery he bowled.

His importance to the Indian team was realised during the tour of South Africa in 2010. India were completely outplayed by the Proteas in the first match in Centurion. Zaheer was injured and Shanthakumaran Sreesanth, Ishant and debutant Jaidev Unadkat looked completely out of place and did not have any clues against a powerful South African batting. He returned for the second match in Durban. And what a difference it made! Zaheer got rid of his bunny in Graeme Smith early in the South African innings. He finished the Test with just six wickets, but his presence gave the whole bowling unit a lift as India went onto win the match. Sreesanth and Ishant looked like completely different bowlers altogether.

He was the leading wicket-taker in the 2011 ICC World Cup. MS Dhoni got the plaudits for India winning the final, but if one looks at how easily India won the match towards the end, credit must go to Zaheer. Even if people may not realise it, his opening spell at the Wankhede proved decisive. Sri Lanka hardly got any runs in the first 10 overs — that counts.

He has also had his fair share of injury issues. Ever since his injury during India’s tour of England in 2011, Zaheer has not been the same bowler. His form has tapered since then and he was eventually dropped. But looking back at his last 10 Test matches and when compared with India’s current spearhead Ishant, Zaheer still has better figures.

Zaheer did seem like getting back on the right trail during the Indian Premier League 2013. Although he played only two matches right at the end of the group stages for Royal Challengers Bangalore, he seemed to fit the bill. His four-wicket burst against Chennai Super Kings was great to watch. One has to take this with a pinch of salt as it was still just a Twenty20 match.

Rahul Dravid recently said that if Zaheer can get himself fit, then he would be priceless. An inexperienced Zaheer lost it against Gilchrist and Ponting in 2003. A wise Zaheer got the better of Sri Lanka in 2011. In 2012, MS Dhoni hailed Zaheer as the Sachin Tendulkar of the bowling department.

India will have a young and relatively inexperienced pace attack at the 2015 World Cup. You do the math. Zaheer is needed and luckily there is time on his side with two years to go for the World Cup. India’s next big test will be during the tour of South Africa this year. If Zaheer is not picked, then we will truly realise where we stand as a fast bowling unit. To win the 2015 World Cup, India need Zaheer back that is for sure.