Zimbabwe struggled against the Pakistan spinners right from the first over.

Having suffered yet another defeat at the hands of former World T20 champions Pakistan in the opening game of the two-match series at Harare on Sunday, Zimbabwe have again proven that they have a long way to go before being competitive in the shortest format. However, their inability to handle spin bowling is one thing they can immediately remedy. Ayush Gupta analyses Zimbabwe’s fall of wickets against spin and how they can handle the problem.

Zimbabwe continue their quest to be taken seriously by the top nations in world cricket. Zimbabwe struggled against the Pakistan spinners right from the first over. Chamu Chibhabha was bowled by Imad Wasim in the very first over of the chase. Chibhabha went to play it on the on-side, whereas considering the turn the ball had, he should have played a defensive stroke to it.

The second man to fall to a spinner was Sikandar Raza. This time Wasim had changed his pace and Raza failed to read it. It was a strange shot from Raza, who was dismissed LBW but would have also been stumped. It was a nothing shot that eventually resulted in his dismissal.

Hamilton Masakadza was the next to go. Having batted resolutely for so long, Masakadza would have been disappointed at gifting his wicket away at a crucial point at the match. With the team struggling to keep wickets intact at the point, Masakadza should have composed himself and waited for the right ball to play the shot. He should have stepped out and taken the ball on the full, or should have went to the back foot and check the turn of the ball before adjusting his shot. The rush of blood caused all the trouble.

The final wicket that fell to spin was in the form of Sean Williams. It was another unnecessarily fancy shot when sensible batting was the order of the day. Williams tried to play a reverse sweep instead of coming down the track for a full toss or going to the back foot to adjust his shot.

Thus, all the four wickets above explain that the Zimbabwean batsmen are facing troubles to pick up the right ball while facing spinner, and mostly they fail to read the ball properly. Therefore, the way to solve this trouble is for the batsmen to face more spinners at nets and some good exposure to international circuit as well as playing regular international games would definitely help the batsmen to groom themselves in order to face the spinners better. Also, head coach Dav Whatmore’s valuable coaching tips are sure to help if the batsmen correctly applies them at the crease. 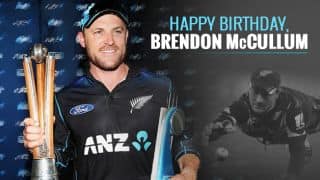 Highest wicket-takers in each calendar year in Tests since 1877