This comeback by Zimbabwe never looked on cards, but their comeback has given them a must-needed boost and momentum which might just pull the series in their court.

Zimbabwe pulled off an enthralling victory over Afghanistan to level the five-ODI series 2-2. Now the final verdict will be decided, on Sunday, in the final contest at Harare. The hosts have impressively bounced back from a 0-2 deficit, making the fifth ODI a fascinating contest. Afghanistan, on the other hand, have been outplayed despite gaining momentum at the start of the series. This comeback, however, by Zimbabwe came as a surprise, but their counterattack took Afghanistan aback. Let us have a look at some of the key clashes for the series-decider that are most likely to happen.  Full Cricket Scorecard, Afghanistan vs Zimbabwe, 5th ODI, Harare

Mohammad Shahzad vs Tendai Chatara: Shahzad has been Afghanistan’s superstar. Smashing the likes of Dale Steyn in the ICC World T20 2016 is the evidence to the very fact. He scored an aggressive half-century in the second game. From wristy flicks to colossal sixes to elegant drives, he has all the shots in his armoury. But facing the top wicket-taker Tendai Chatara in the series will be different ball game.

Chatara has been spot on in this series. He knows how to make full use of home conditions. He has the knack of swinging the ball away from the batsman, posing serious threats and hence has emerged as the leading wicket-taker (10) in this series.

Mohammad Nabi vs Sean Williams: It is a battle between two match-winning all-rounders. Nabi is one of the most successful all-rounders of limited-overs cricket currently. He has won Afghanistan many a match with his spell as well as destructive batting. Williams is known for his composure and ability to keep going even at crucial junctures. Williams has been one of the reasons for Zimbabwe’s resurgence this series.

Malcolm Waller vs Najibullah Zadran: People often tend to forget the contributions of the lower-middle-order batting. They add quick runs, play brief knocks but at times, those knocks become the difference between victory and loss. Both Waller and Najibullah play in the lower-middle order and have the same role to play in their teams. The limelight will also be on them when the two teams clash. 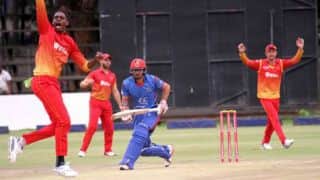