North and South Korea are technically still at war after the 1950-53 Korean War ended in a truce.

Hosts South Korea overpowered Thailand 2-0 today to set up a titanic Asian Games football final against North Korea, whose star forward scored the winning goal then got himself sent off. The two countries, which straddle the world’s most fortified border, each won their semi-finals, giving the men’s tournament a blockbusting gold medal clash full of political and emotional overtones.

Communist North Korea beat Iraq 1-0 in extra time. Jong Il-Gwan scored an extra-time winner with a curling free kick but was sent off minutes later, ruling him out of Thursday’s final. “We will have to keep all of our emotions under control. I expect North Korea are feeling more tired than we are so that gives us a bit of an edge.” South Korea coach Lee Kwang-Jong said after his side’s victory.

Striker Lee Jong-Ho headed South Korea in front after 41 minutes as the home side’s relentless pressure finally told before captain Jang Hyun-Soo held his nerve to add a penalty he was forced to take twice in first-half stoppage time. South Korea’s players will be excused two years of mandatory military service if they end a 28-year title drought and win the tournament, which is played under the same under-23 format as the Olympics.

“Records are there to be broken,” said coach Lee, whose team were roared on by 23,000 fans. “We’re in the final and I’m extremely proud of my players. Now they have to finish the job, regardless of who we’re facing.”

North and South Korea are technically still at war after the 1950-53 Korean War ended in a truce, not a peace treaty. But they regularly play each other in sporting contests.

North Korean coach Yun Jong-Su fired the first salvo before their showdown by calling for the officiating to be impartial. “I hope that the referee for the next game will make decisions in a correct and fair way,” he said.

A North Korea victory would serve as a useful propaganda tool for Pyongyang, which frequently lavishes cars and apartments on medal-winning athletes who bring glory to the state The North last won men’s football gold at the 1978 Asian Games in Bangkok when they shared it with South Korea. They will be without goalscorer Jong, who celebrated with gusto after netting his fifth goal of the tournament five minutes into extra time. His smile quickly vanished when he saw red for a second bookable offence during one of many skirmishes between the sides.

With North Korea’s champion weightlifters, including gold medallist Om Yun-Chol, weeping joyfully in the crowd, the players sank to their knees as the final whistle sounded as they secured the communist state’s second appearance in the Asian Games final. 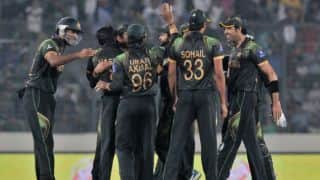