The tri-colour rose and the national anthem was played as India’s men players scripted history with a gold medal win in the team event of the Asian Games squash competition here Saturday when they defeated Malaysia 2-0 in the final.

Earlier, the Indian women settled for a silver medal losing 0-2 to Malaysia to take the country’s tally from the sport in this Games to four, including one gold, two silver and a bronze, bettering the three bronze medals at Guangzhou four years ago. “It was a dream come true,” said national coach Cyrus Poncha while the other official with the team in Incheon, Maniam commented: “It was an outstanding performance, the best I have seen from India so far.”

Both the finals did not go the distance with Malaysia beating India 2-0 in the women’s section in what seemed a routine affair, but in the tussle between the two countries in the men’s section India emerged 2-0 victor with some incredible displays by Harinder Pal Sandhu and hard worker Saurav Ghosal.

Ranked 77 in the world, Sandhu or Harry as he is popularly known, provided the stunner when he beat the former World No.9 Iskandar Mohammad Azlan Bin in four games. “I have never seen Harinder play with such brilliance,” said Maniam, who virtually trained him to this level at the Indian Squash Academy in Chennai.

Known for his fighting qualities, Sandhu in addition showed rare confidence and a good touch with his strokes. Having given India the advantage of a 1-0 lead, it was left to Ghosal to wrap up the tie, but it did not prove that easy against Ong Beng Hee. Ghosal had beaten the redoubtable Hee in the individual competition earlier, but to repeat that feat spoke high of his caliber. Ghosal had to dig into his reserves as the contest dragged to five games and to the very end in the decider. Once he grabbed the final point, Ghosal knew the import of that as did the fans around as cheers rose for a new milestone in Indian squash.

The women, on the other hand, could not do much against the World No.1 Nicol David-led Malaysia. Once Anaka Alankamony went down to Arnold Delia Odette, it was Dipika Pallikal’s turn to lose to Nicol and inside an hour Malaysia had grabbed the gold, leaving India with the silver. 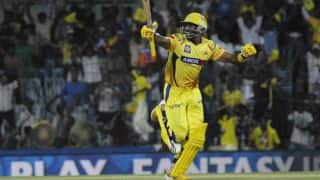