India lost the semi-final by a slim margin to Chinese Taipei.

The Indian women’s compound archery team will be fighting out for the bronze medal with Iran in the 17th Asian Games after it lost the semi-final by a slim margin to Chinese Taipei at the Gyeyang Asiad Archery Field on Thursday.

The women’s team of Trisha Deb, Purvasha Shende and Surekha Jyothi, shot 224 while the Chinese Taipei team, comprising Ning Meng Wen, I Jou Huang and Ting Ting Wu, had 226. The Indian girls had 11 X’s while the Taipiei team had 13 X’s.

In the other semi-final, Iran went down 222-229 to hosts South Korea. The Iranian team of Sakineh Ghasempour, Maryam Ranjbarsari and Shabnam Sarlak, had 10 X’s in the total of 222 while the Korean girls, Bomin Choi, Yunhee Kim and Jihyun Seok, had 14 X’s in their total of 229.

The Koreans also set a world record during their 238-215 win over Laos in the quarterfinals. Seok, Bomin and Kim combined for 238 points out of a possible 240, beating the previous world mark, held by the US, by two points.

South Korea and Chinese Taipei will be fighting it out for the gold medal Saturday alongside India and Iran who will be contesting for the bronze.

Earlier in the day, India had beaten Kazakhstan in a shoot-off in the quarterfinal to seal the semi-final berth. Both the teams were tied on 223 each and India clinched the match, shooting 29 in the shoot-off while Kazakhstan had 25. Compound archery, a non-Olympic medal event, is making debut at the Asian Games. 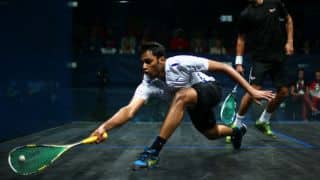 Asian Games 2014: India assured of bronze in squash as team qualifies for semi-final