Sarita lost in the semi-finals which appeared to be a litigious bout of the women’s lightweight category at the Incheon Asian Games.

L Sarita Devi, who became famous and earned a national recognition after refusing to accept the bronze medal in boxing at Incheon Asian Games said that she hopes this outburst of her helps in better judgement of the points later this year during the Boxing World Championships to be held in South Korea.

“Korea is hosting it and I am hoping that my protest will make some difference to the standard of judging. I hope nobody feels wronged like I did. No boxer should go through this, we work so hard.” Sarita told PTI.

During an interview with NDTV, Sarita reportedly said that during the medal ceremony, her Korean opponent, Jina Park confessed that Sarita had won the bout. “After I put the medal around her neck, she came and gave it back to me and said you win.” said Sarita. It also might have been possible that Park referred to the bronze medal instead of the bout.

Sarita lost in the semi-finals which appeared to be a litigious bout of the women’s lightweight category at the Incheon Asian Games and later refused to accept the bronze medal at the podium during the medal presentation ceremony as she was seen crying acrimoniously. She was later seen giving the medal to her Korean opponent, Park in order to protest. It also led to instigate disciplinary actions against her by the International Boxing Association (AIBA). However, later Sarita was seen offering an “unconditional apology” for her actions to the AIBA.

“I apologised because I did not want any other Indian boxer to suffer. I fight for my country and by apologising I have tried to ensure that no other Indian gets affected. I feel I was wronged. We suffered a lot due to the federation’s termination earlier; I didn’t want anything new to affect our boxers.” she said.

As Sarita recalled her emotions at the podium, she admitted that she had lost her control.

“I could not control myself on the podium. I offered her (Park) the medal because that’s what she deserved. I deserved better. She came to me to return the bronze but I could not take it, I was too overwhelmed. She requested me to take it back,” Sarita said.

“I am not angry with her. She was just fighting like me. The wrong was done by others. It was not her fault,” she added.

According to NDTV, Sarita also said that it’s futile thinking about the bout anymore as it would only make her sadder and emotional.

“Whatever has happened to me, I want to forget and focus on the future,” she said. “I want to prove myself at the World Championships and the Olympics. My broken heart has been healed thanks to all the support I have got from the people of India.” she quoted. 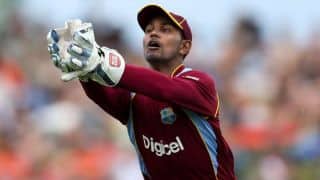