The Indian Premier League (IPL) 2015 saw some excellent all-round performances. While the batsmen enjoyed a productive tournament, the bowlers too held their own on more than one occasion.

The Indian Premier League (IPL) 2015 saw some excellent all-round performances. While the batsmen enjoyed a productive tournament, the bowlers too held their own on more than one occasion. Shiamak Unwalla picks out the top 10 bowlers of the tournament.

NOTE: These are not necessarily the highest wicket-takers of the tournament. These are players who bowled consistently well throughout the tournament, regardless of the outcome of the match. The players are arranged by alphabetical order of their teams.

No one bowled as many overs as Ashish Nehra in IPL 2015. That speaks volumes of the stamina of a bowler many had written off years ago. Nehra grabbed 22 wickets at 20.40 at a decent economy rate of 7.24. He played a huge role in CSK making it to the final, and reinvigorated his career.

The winner of the Purple Cap, Bravo bowled exclusively at the death. He took a lot of wickets in the process, but what was commendable was that he was rarely taken apart by the opposition. Bravo ended with 26 wickets at 16.38 and a respectable economy rate (given the stage at which he bowled) of 8.14.

Though Ashwin was not among the wickets, he was outstanding with the ball. He only scalped 10 victims in 14 games, but he was incredibly miserly; he conceded a paltry 5.84 runs per over on average.

The sole bright spot in a dreadful KXIP campaign, Sandeep once again showed his talent. He moved the ball appreciably, and out-bowled Mitchell Johnson comprehensively. One feels that if he had been backed up by the rest of his team, he would have ended with more than just 13 wickets. Despite playing for the weakest side in the tournament, Sandeep ended with an economy rate of exactly 7.

Age is just a number for Brad Hogg. The Australian chinaman bowler was used mostly as a replacement for Sunil Narine, but was quite obviously the better bowler of the two. Hogg proved he was good enough to be among the best even though he is well into his 40s. Though he played just six matches, he ended with nine wickets at an average of only 16 and an economy rate of 6.85.

Lasith Malinga was far from his best at the start of IPL 2015. By the end, he was the second highest wicket-taker of the tournament. Malinga ended with 24 scalps at 18.50 and an economy rate of 7.40. Despite the fact that he is significantly slower than what he was the last time MI won the title, Malinga remains as accurate as ever.

One of the most under-rated bowlers of the tournament, Harshal Patel actually enjoyed better stats than most of the frontline seamers in the competition. Harshal enjoyed a better average than Nehra, Mitchell McClenaghan, Bhuvneshwar Kumar, and Harbhajan Singh, all of whom had more wickets than him. His economy rate of 7.48 was also better than most.

Perhaps the best pace bowler on display in IPL 2015, Starc bowled with pace, fire, and incredible skill. His average of 14.55 was by far the best in the tournament for bowlers with more than 15 wickets, while his strike rate of 12.9 was bettered by only two others. Starc went at just 6.76 per over.

The most successful spinner of the event, Chahal finished with 23 wickets. Though he was expensive, he took a wicket almost every two overs at 18.04 and an economy rate of 8.86. He was one of the major reasons for RCB to make it to the playoffs.

The last name on this list might come as a surprise. In a team full of excellent bowlers on paper, Henriques hardly stands out. And yet, he bowled better than the likes of Trent Boult, Dale Steyn, Bhuvneshwar Kumar, Ishant Sharma, and Praveen Kumar. Henriques took 11 wickets in nine games at 14.36 (the best average in the tournament by bowlers with a minimum of 10 wickets; better even than Starc) at an economy rate of 6.32. 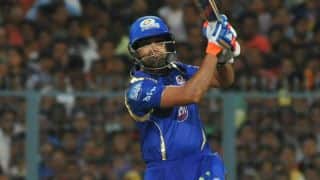 Rohit Sharma: IPL 2015 was a great journey for us Rohit Sharma: We have treated every game as a final