Throughout the course of its eight-year history, Indian Premier League (IPL) has seen some tremendous slam-bang batting performances.

Throughout the course of its eight-year history, Indian Premier League (IPL) has seen some tremendous slam-bang batting performances. That said, it is more often than not the bowling that wins or loses a game. Shiamak Unwalla lists out the top 10 epic bowling performances in IPL that changed the course of a match, arranged chronologically.

NOTE: These are not necessarily the best spells in terms of wickets taken; these are spells that ensured victory for their sides, and take into consideration the match situation and how others bowled in the same game.

The winner of the Purple Cap in the inaugural edition of IPL, Sohail Tanvir was a fearsome prospect in T20 cricket. Bowling off the wrong leg at high speeds and getting the ball to dart off the pitch, Tanvir was one of the main reasons Rajasthan Royals (RR) won the IPL in 2008.

He was at his destructive best against Chennai Super Kings (CSK), getting openers Parthiv Patel and Stephen Fleming out LBW in the first over of the match. He then got Vidyut Sivaramakrishnan caught behind in his second over before coming back to clean up Albie Morkel, Muttiah Muralitharan, and Makhaya Ntini to end with outstanding figures of six for 14 — still the best in IPL history. RR won the match comfortably by eight wickets.

CSK were on the receiving end of Tanvir earlier in the tournament, but this time they turned the tables against Kings XI Punjab (KXIP). After Subramaniam Badrinath and Mahendra Singh Dhoni took CSK to 181 for four, Shaun Marsh came out all guns blazing to put CSK in a tight corner.

KXIP were course at 95 for two in 12 overs when Balaji started to weave his magic. He bowled Ramnaresh Sarwan for 20 before taking the all-important wicket of Marsh in the same over. He returned to bowl the final over of the match, with KXIP in with a faint chance of pulling off an unlikely win. Irfan Pathan was looking in a murderous mood, having scored 40 off 17 balls before Balaji got him out. He proceeded to dismiss Piyush Chawla and VRV Singh off the next two balls as well to end with five wickets and a hat-trick. CSK managed to pull off an 18-run win.

Batting first, Delhi Daredevils amassed 194 for four, thanks to fifties from Gautam Gambhir and Shikhar Dhawan. Deccan Chargers, by this point the wooden spooners of IPL 2008, did not go down without a fight.

Promoted to open batting, Shahid Afridi batted like only he can, hitting 33 off 14 balls to get DC off to a flying start. He was backed up brilliantly by the likes of Herschelle Gibbs, Rohit Sharma, Scott Styris, and Venugopal Rao. Sehwag was running out of ideas when he turned to his ace leggie Amit Mishra, who proved to be the difference between the two sides. Bowling the seventh over, Mishra had Afridi out first ball. He cleaned up Gibbs in his next over before returning to bowl the 20th over. Defending 15 runs in the final over, Mishra dismissed Ravi Teja, Pragyan Ojha, and RP Singh off the first three balls to win DD the game.
4:  Irfan Pathan vs Rajasthan Royals, IPL 2008: 4-0-10-1

Shaun Marsh was already a popular player for KXIP given his high-scoring ways, but he became a real household name with his century against RR. James Hopes scored 51, while Yuvraj Singh scored a frenzied 49 off merely 16 balls as KXIP roared to 221 for three.

In response, RR kept themselves in contention with some quick runs throughout. They took S Sreesanth for 14.66 runs an over, James Hopes for 9.66, Piyush Chawla for 8.75, and Yuvraj for 20 in the one over that he bowled. However, they were just not able to do anything with Irfan Pathan. The left-hander bowled four overs for merely 10 runs in a match where others were going at over 10 an over. In the end, his stranglehold proved to be a massive game-changer for KXIP.

Batting first, RCB rode on Rahul Dravid’s sublime 66 off 48 balls to score a competitive 133 for eight. With 32, Kevin Pietersen was the only other batsman to get to double figures. If RR thought they would breeze home, they were sadly mistaken.

Praveen Kumar got rid of Swapnil Asnodkar in the first over before coming back to dismiss Graeme Smith in his next over. Jesse Ryder proved to be surprisingly effective, snaring the wickets of Niraj Patel and Tyron Henderson to leave RR reeling at 28 for four. Kumble then took centre-stage, picking up the massive wicket of Yusuf Pathan and getting rid of Ravindra Jadeja off the very next ball. He was relentless, taking out Shane Warne and Munaf Patel in his next over before finishing things off with the wicket of Kamran Khan. Kumble finished with the second-best IPL spell of all time, as RR crashed to the lowest ever IPL score.

Till as recently as IPL 2014, Mumbai Indians (MI) enjoyed complete dominance over CSK at the Wankhede. Batting first in their 2011 encounter, MI rode on Rohit Sharma’s terrific 87 to set CSK a 165-run target.

CSK were up and running early, with Michael Hussey looking in good nick. Murali Vijay was dsimissed by Munaf Patel, which brought Suresh Raina in to bat in the fourth over. Harbhajan Singh was called upon to bowl the fifth over, and he had Raina out caught and bowled. At 101 for four in the 13th over, CSK were under pressure but still with their noses ahead. ‘Bhajji’ had other ideas though, as Srikkanth Aniruddha, Albie Morkel, Ravichandran Ashwin, and Joginder Sharma were made painfully aware of. Though Badrinath played a blinder at the other end, Harbhajan ensured that his 48-ball 71 not out went in vain as MI won by just eight runs.

If ever Ishant Sharma’s ability as a wicket-taker was in doubt, his spell against Kochi Tuskers Kerala (KTK) laid that doubt to rest. Kumar Sangakkara (65) and Cameron White (31) were the only men to cross double figures for Deccan Chargers, as KTK were set a paltry 130 to win. It would prove to be 55 runs more than KTK could handle.

Dale Steyn took out Brendon McCullum in the very first over of the chase, getting him to edge to Sangakkara off his fourth ball. Ishant then came to the fore. He got one to bounce and seam away from Parthiv Patel, and the edge found Sangakkara again. Raiphi Gomez couldn’t last more than one delivery, getting drawn onto the front foot by Ishant and bowled. Gomez wouldn’t have felt too bad; he played Ishant much the same way Ricky Ponting had at another point in time. Ishant was not done yet, though. Brad Hodge came and went in that same over, once again bowled by Ishant. In his next over, Ishant had Kedar Jadhav out LBW plumb in front of the wickets. He finished the over with the wicket of Mahela Jayawardene, as KTK crashed and burned to 11 for six. Five of the top six batsmen had walked back for ducks.

Over the last few seasons of IPL, teams from Hyderabad have tended to have a stronger bowling attack than most, while the batting has been their major weakness. This trend began around IPL 2011 with Deccan Chargers, and has continued even now with Sunrisers Hyderabad. They were still DC in 2012 though. Batting first against RCB, DC were propelled by JP Duminy to 132 for seven.

Chris Gayle looked like he wanted to end the game early, and hit 27 off 10 balls with three fours and two sixes in Manpreet Gony’s second over. Steyn, who had bowled a three-run first over, did even better in his next one, getting the massive wicket of Gayle. The big Jamaican looked to take Steyn on, but only got an inside edge onto his stumps. Steyn then dismissed Tillakaratne Dilshan LBW in his next over before cleaning up Zaheer Khan — inexplicably sent in at No. 7 — to end with three wickets. What was more important was that Steyn conceded just eight runs in his four overs. Given that DC won by merely nine runs, his effort was a sensational one.
9:  Amit Mishra vs Pune Warriors India, IPL 2013: 4-0-19-4

Amit Mishra is one of the most successful bowlers in IPL history. He has taken multiple hat-tricks and holds the record for highest number of IPL wickets by an Indian. The full extent of his range and skill was on display when Sunrisers Hyderabad took on Pune Warriors India in IPL 2013. Batting first, SRH huffed and puffed to 119 for eight in their 20 overs.

In reply, PWI were all but home free at 101 for four in the 17th over, bowled by Steyn. He got rid of Mitchell Marsh with his final ball, before Thisara Perera struck to send back Abhishek Nayar in the next over. PWI would have fancied their chances regardless, with only 14 needed off the last 12 balls and Angelo Mathews in the middle. To fully explain the extent of madness that followed, here is a ball-by-ball description:
Ball 1: ONE. Manish Pandey calmly drives to covers.

Ball 2: OUT. Angelo Mathews looks to go down the ground, but only manages to hole out to Dale Steyn. The batsmen cross but the catch is taken.
Ball 3: ONE. Pandey drives to long on for a single.
Ball 4: OUT. Bhuvneshwar Kumar is caught on the crease, doesn’t read the googly, and is adjudged out LBW.
Ball 5: OUT. Rahul Sharma plays the most ill-advised slog in the history of ill-advised slogs. Obviously, he misses. Mishra does not. Sharma is bowled for a first-ball duck. Mishra is on a hat-trick.
Ball 6: OUT. Ashok Dinda tries his absolute best to play a front-foot defence, but the googly goes past his bat and thuds into the stumps. Mishra has a hat-trick — his third — and takes four wickets in the over. PWI lose by 11 runs, having lost their last five wickets for eight runs.
10:  Jaydev Unadkat vs Delhi Daredevils, IPL 2013: 4-0-25-5

Though Chris Gayle fell early against Delhi Daredevils (DD), Virat Kohli ensured that RCB would not suffer too greatly. Playing at his home ground of Feroz Shah Kotla, Delhi, Kohli scored a terrific 99 to lead RCB to 183 for four in their 20 overs.

In reply, DD started off well, getting to 60 by the seventh over, but losing three wickets. Jaydev Unadkat was the man who pegged them back early, getting rid of both Mahela Jayawardene and Virender Sehwag. Unmukt Chand played a good hand, and he was backed up by Ben Rohrer. Unadkat dismissed Chand and then Kedar Jadhav in quick succession.  Irfan Pathan and Morne Morkel swung their bats at the end, but Unadkat rang the final bell when he took out Morkel. In the end, Unadkat’s spell proved to be decisive as RCB won by only four runs. 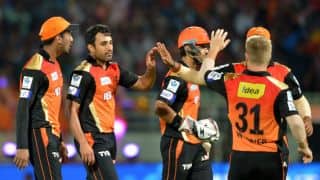