There have been many incidents when cricketers are asked for a challenge or dare and they do it. Abhishek Kumar comes up with this unique list of challenges taken by cricketers.

Cricket is surely amongst the most followed sports in the world and when it comes to cricketers, they are no less than superstars. In fact, few are considered to be super human and alien because of their consistency and determination in the game. However, any cricketer, irrespective of how popular of he/she is, always faces some or the other challenge. But being a true sportsperson, he/she dares to prove that challenges could be overcome. There have been many incidents when cricketers are asked for a challenge or dare and they do it. Abhishek Kumar comes up with this unique list of challenges taken by cricketers.

Kevin Pietersen is amongst the most charming cricketers in the current cricketing world and his attractive batting has always been a treat to watch. Playing cricket blindfolded is something one would think many times before trying. But Pietersen not only did it, but did with flair and hit almost every ball for a biggie.

3.  Ian Bell and his excellent placement:

Ian Bell has been one of the most elegant batsmen from England in the last decade. He is amongst those rare cricketers to have played more than 100 Tests in their career. Checking out his batting skills, England pacer Tim Bresnan once asked him to hit on three different small baskets one by one. Bell hit two of them quite easily with his excellent placement with the bat and on the last one, Bresnan asked him to hit it blindfolded and he did that too quite easily. After Bell, it was Bresnan’s turn to do something and he was asked the hit the beer drum so hard that drink should come out of it. Bresnan too kept his words and did the same in one shot.

In January 2016, when Australia were busy playing India, Glenn Maxwell came up with a unique challenge for his teammates Usman Khawaja, Joel Paris and Scott Boland. The challenge was to smash the ball and get it into the Gatorade cooler. There were multiple tries, but no one was successful. Maxwell once hit the cooler but did not get the ball inside. Finally, Paris, who interestingly is not a batsman but a bowler, did it.

5.  How about hitting a moving target?

NatWest T20 Blast is amongst the most popular and happening T20 leagues in the world. It provides huge amount of entertainment while the match is on but very few people know about the fun behind the scenes. In the 2013 season of this tournament, which was then known as Friends Life T20 competition, few players were asked to take the challenge to hit the moving clay by throwing aiming the ball at them. After consecutive failures, players tried to hit the bull’s eye by trying it together and finally they did it. They also tried aiming while batting to add more to the fun.

This was probably the best challenge ever one will see in the history of cricket. Muttiah Muralitharan and Graeme Swann have surely been amongst the best spinners in the world. Both have excellent record for their respective teams and once they came up with a very unique challenge, where one had to hit the coin placed at the top of the glass which was placed above the stumps. Both bowled normally but failed to hit the coin after trying multiple times. Swann hit the stumps quite a few times and in the end it was master Muralitharan who did it perfectly.

7.  Who will hit the drone – Chris Gayle or Kevin Pietersen?

This was another challenge; a tough one if we look from a batsman’s perspective. The challenge was to hit the drone and two of the world’s best entertainers — Chris Gayle and Pietersen were ready for this task. Both tried their best and finally Gayle did it and proved why he is the best entertainer.

England’s current limited-overs skipper Eoin Morgan is amongst the best hitters of the ball. But when it comes to play like a visually impaired cricketer, it becomes too difficult, even for him. There are three categories of blindness in visually impaired cricket and those are B1, B2 and B3. The first category is being in a state of complete blindness and this is played with plastic ball, containing ball bearings, delivered underarm. The second one refers to very limited visibility and the third one refers to blurred state. Morgan tried his hand in batting with all three types of glasses but failed to connect the ball properly. Imagine how visually impaired cricketers play cricket and hit the ball.

Back in January 2013, when England batsman Jonathan Trott used to be in good form, he took up an exciting challenge with the Welsh footballer Gareth Bale. After multiple kicks, both could not score any goal but suddenly Trott shocked his soccer star mate with a goal and in the end he was the winner of the challenge.

It was just before the first ever Day-Night Test match when Australian opener David Warner took up this interesting challenge. He was playing without any lights. Warner first struggled but once he got his eyes set, there was no stopping and only hitting. After that he was asked to hit the given targets and Warner did the same as well quite easily. That was something truly amazing. 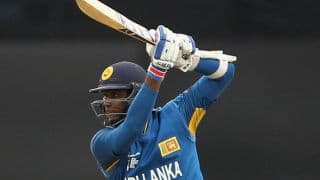 Angelo Mathews dismissed for 48 in Ireland vs Sri Lanka 2016, 1st ODI in Dublin