Did you know that the very first laws of lawn tennis were drafted by the Marylebone Cricket Club (MCC) in 1875?

Did you know that the very first laws of lawn tennis were drafted by the Marylebone Cricket Club (MCC) in 1875? Since then, there have been cricketers who have been associated with tennis in some ways. Nishad Pai Vaidya draws a list of the connections between tennis and cricket.

Shoaib Malik is one of the most popular limited-overs cricketers in the world, having played for numerous T20 sides. Malik has captained Pakistan in the past and has been a fairly regular member of their one-day setup since the early 2000s. He married Indian tennis star Sania Mirza in 2010, attracting copious media attention. While Malik has scripted a comeback to the Pakistan team in 2015, Mirza went on to win the Wimbledon doubles title along with Martina Hingis. She has won the paired event at all the four Grand Slams and is currently the No 1 doubles played in the world. Sania and her husband are often seen at each other’s sporting assignments. Sania is also related to two other Test skippers — former India captain Ghulam Ahmed and former Pakistan Test captain Asif Iqbal.

2.  The Mankad and Vasant families

Ashok Mankad, the son of the legendary Indian all-rounder Vinoo, played 22 Tests for the country. His brothers, Atul and Rahul, also played First-Class cricket. Ashok Mankad married Nirupama Vasant, who was was an Asian tennis champion. Their son Harsh represented India in the Davis Cup. Ashok Mankad’s father-in-law, ‘George’ Vasant, also represented India in tennis. Ashok’s brother-in-law Mayur was a top doubles player in the country while his sister-in-law Asmita was also a well-known player.

The former Kenya captain, Aasif Karim, is best remembered for his miserly spell of three for seven against Australia in the 2003 World Cup. Karim comes from a sporting family; his father Yusuf was a famous tennis player in Kenya, who also dabbled in cricket. Karim and his brother Aarif moved to the United States of America (USA) in their young days on a tennis scholarship. Karim even represented Kenya in three Davis Cup matches against Egypt. He was then a notable figure in Kenya cricket, being an integral part of their side that made the charge to the highest level. He signed off on a high after the semi-final of the 2003 World Cup.

Mike Procter was one of the leading all-rounders in the 1970s and could have gained greater international recognition had South Africa’s sporting isolation not come his way. His wife, Maryna Godwin, was a tennis player before their marriage and played in all the Grand Slams except the Australian Open.

The Barbadian wicketkeeper-batsman represented the West Indies in four Tests in 1953. He also played in the Davis Cup for the West Indies/Caribbean. Legall had a short First-Class career as it lasted only 16 matches. He is presumed dead in 2003 as not much is known about his fate.

Cotar Ramaswami was an all-round sportsman. As a 26-year-old, he competed in the singles at Wimbledon and then played doubles alongside another First-Class cricketer, Syed Mohammad Hadi, in the Davis Cup. In 1936, Ramaswami made his international debut on India’s second tour of England, playing two Tests and finishing with a batting average of 56.66. Like Legall, Ramaswami’s fate remains a mystery after he disappeared in 1985. He too is presumed dead.

Buster Farrer, the right-handed batsman, represented South Africa in six Tests in the 1960s. A few years before making his debut, he played the singles at Wimbledon and qualified for the second round, only to be beaten by Sweden’s Staffan Stockenberg. His sporting excellence extended to eight disciplines and he wore national colours in three. His accomplishments have are now chronicled in a book written by Colin Bryden, called All-rounder – the Buster Farrer Story.

John Edrich, the gutsy England opener, was married to American tennis player Pat Stewart. The marriage was short-live, but Stewart did enter Wimbledon as Mrs JH Edrich when they were together.

9.  Alex Hales and his grandfather

Alex Hales has made quite a name for himself as an attacking opening batsman in limited-overs cricket. The England batsman’s grandfather, Dennis, was a tennis player and once played a five-setter against the great Rod Laver in a Wimbledon qualifying encounter.

Warren Bardsley was one of Australia’s main batsmen in the pre-Don Bradman era. He represented Australia in 41 Tests in the early 1900s and scored 2469 runs at an average of 40.47 with six tons. His nephew John Newcombe is one of the legends in tennis. In the 1960s and ‘70s, he won three Wimbledons, two US and Australian Opens each. The former World No. 1 remains one of Australia’s greatest sporting figures.

Charles Winslow was a three-time Olympic tennis medalist — two gold medals, men’s singles and doubles at the 1912 Olympics in  Stockholm — and eight years later in Antwerp he won his third Olympic medal —a bronze in the men’s singles.

*Kepler Wessels, the former South African and Australian Test cricketer, excelled in tennis at a young age and nearly took up a scholarship with an American university. In fact, Hansie Cronje’s mother San-Marie, was one of Wessels’ tennis coaches.

*Alan Wilkins, the former Glamorgan fast bowler, is a known as a cricket commentator on television, but he is also a familiar face during tennis Grand Slams as a TV commentator. 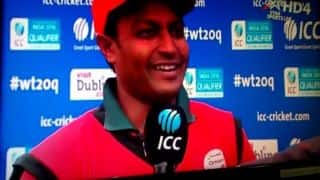