From being a nation that cricketers hated to travel, India is now the most sought-after destination for cricketers. Many have found their life-partners in India, while others have found goldmines in one form or the other.

From being a nation that cricketers hated to travel, India is now the most sought-after destination for cricketers. Many have found their life-partners in India, while others have found goldmines in one form or the other. H Natarajan lists 12 cricketers who forged strong links with India.

Before she became the long-time girlfriend of Bollywood superstar Rajesh Khanna, actress Anju Mahendru had almost got married to cricketing legend Garry Sobers. Anju was engaged briefly to the West Indian. Sobers fell in love with Anju when he came to India in 1967 as captain of the West Indies team.

Glenn Turner, one of the earliest great batsmen New Zealand produced, married Sukhinder Kaur Gill in 1973. Sukhi Turner, as she came to be known, went on to become Mayor of Dunedin for nearly a decade.

Zaheer Abbas, the only Asian to score 100 First-Class centuries, is considered to be among the best batsmen Pakistan has ever produced. Zaheer met Rita Luthra, an Indian studying interior design, in UK. Rita was a student and Zaheer was playing county cricket for Gloucestershire at the time. The couple married in 1988.

Mohsin Khan, the handsome Pakistani opener, fell in love with actress Reena Roy and married her. Mohsin himself went on to act in as many as 13 Bollywood films. Mohsin had a daughter from his marriage with Reena, but the relationship soon soured and ended in a divorce.

Arguably one of England’s most astute captains of all time, Mike Brearley met Mana Sarabhai during England’s tour of India in 1976-77. Mana is the daughter of Gautam Sarabhai, a highly successful businessman from Ahmedabad, and niece of Dr Vikram Sarabhai, father of India’s space programme.

Viv Richards fell in love with actress Neena Gupta and the two had a child, now one of the leading fashion designers in the country. Though Richards and Neena were not married, the two continue to be doting parents to their child Masaba.

7:  Muttiah Muralitharan goes back to his Tamil roots

Sri Lanka spin legend and international cricket’s leading wicket-taker, Muttiah Muralitharan is a Tamilian himself. He married a girl from Chennai, Madhimalar Ramamurthy, in 2005. The couple have a son, born in 2006.

Shoaib Malik got married to Indian tennis star Sania Mirza in one of the most publicised and controversial weddings in sports history. Malik was reportedly already married to a girl from Hyderabad; something Malik denied till the marriage certificate was produced. Malik and Sania have since weathered the storm, and are happily married even now.

The Australian paceman met ramp supermodel and Miss Earth India 2001 Mashoom Singha during the 2010 Indian Premier League when he was playing for Rajasthan Royals. The two went around for four years, before Tait proposed to his lady love in Paris and got married in June 2014 in Mumbai.

An entertainer to the core, Bravo’s Chennai Super Kings connections landed him a role in a Tamil Film, Ula. Bravo in fact is the second West Indian to act in an Indian film, after the cameo by Sir Frank Worrell, one of West Indies’ famous “Three Ws,” in the Raj Kapoor film ‘Around the World in Eight Dollars.’ Bravo, who one of the finest dancers in modern cricket, will soon be launching the Dwayne Bravo Dance School in Chennai, which he considers “home away from home”.

11:  After his duet with Asha Bhosle, Brett Lee is now a Hindi film star

Brett Lee was the cast in an Indo-Australian film Unindian opposite Tannishtha Chatterjee, a film that is being shot in Sydney. Owing to Lee’s popularity in India, he has a number of major sponsorship deals there, including Lee is a familiar face in many ads like Timex watches, Boost energy drink, TVS Motor and New Balance shoes because of his immense popularity with the Indian masses. Lee also wrote a song during the 2006 ICC Champions Trophy in India which he sang as a duet featuring with Asha Bhosle.

Jonty Rhodes showed his abiding love for India by naming his new-born “India”.  His wife Melanie delivered the baby last week at a hospital in Santa Cruz, Mumbai. “I have spent a lot of time here [in India]. What I love about India is that it’s a rich mix of culture, heritage and tradition. It is a very spiritual country, very forward-thinking nation. I really like that combination. You have to have a good balance of life. With the name like India, she will have the best of both worlds and that sort of balance,” Rhodes told Mid-Day. 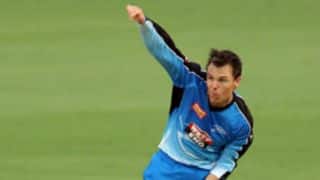