From the slap-gate in the inaugural season to matches being rescheduled out of Maharashtra due to water crisis in the ongoing season, each year of IPL has witnessed some or the other mishap.

Season nine of India’s grandest T20 tournament — Indian Premier League (IPL) is in progress but like every year this edition too has been marred by controversies. From the slap-gate in the inaugural season to matches being rescheduled out of Maharashtra due to water crisis in the ongoing season, each year has witnessed some or the other mishap. Suraj Choudhari pens down 12 such instances which will be remembered for generations to come.

1.  Slap-gate, 2008: This was unarguably one of the darkest hours in the history of Indian cricket as off-spinner Harbhajan Singh slapped speedster S Sreesanth on the field. Right after Kings XI Punjab (KXIP) defeated Mumbai Indians (MI) in Mohali, Harbhajan reportedly slapped Sreesanth for his aggressive behaviour towards him and was subsequently banned from the entire season.

2.  Sacking of Lalit Modi, 2010: The founder of IPL Lalit Modi was sacked by the Board of Control for Cricket in India (BCCI) for some financial wrongdoings. He was suspended in April 2010 when he was involved in wiring bidding deals related to the IPL, bribes, money laundering and betting.

3.  Ravindra Jadeja one-year ban in the 2010 IPL: Rajasthan all-rounder Ravindra Jadeja was imposed a one-year ban when he tried to breach the players’ code of conduct ahead of the third season. Jadeja tried to opt for a better contract with MI while his contract with Rajasthan Royals (RR) was still active. The IPL authorities decided to set an example for other players and avoid such actions in the near future and decided to ban Jadeja for a year.

4.  Shane Warne abusing an official, 2011: The legendary Australian leg spinner Shane Warne’s career has been full with controversies. In 2011, a match between RR and Royal Challengers Bangalore (RCB) attracted massive attention over the nature of the pitch being used for the game at Sawai Mansingh Stadium. The RCA secretary Sanjay Dixit lodged a complaint with the BCCI claiming that Warne had verbally abused him. Warne was imposed a fine of $50,000 after a brief enquiry.

5.  Exit of Kochi Tuskers Kerala from the IPL, 2011: Kochi Tuskers Kerala (KTK) just managed to feature in a solitary season as their contract was terminated by the BCCI over issues related to ownership. The inclusion of Kerala was also believed to have connections with Minister of State for External Affairs Shahsi Tharoor and the fact that he had made use of his ministerial influence to acquire a venture. These things were made possible through Tharoor’s late wife Sunanda Pushkar. Tharoor was compelled to resign from his post and later the BCCI terminated Kerala’s when they were not able to garner sufficient fees.

6.  Rahul Sharma and Wayne Parnell caught in the act, 2012: South African all rounder Wayne Parnell and Indian leg-spinner Rahul Sharma were reportedly caught at a rave party in Juhu. The duo played for Pune Warriors India (PWI) and refused to have taken any kind of drugs at the party but the tests which were done later proved that they consumed recreational drugs.

7.  Luke Pomersbach incident, 2012: During the 2012 season of the IPL, the elegant Australian batsman, who was playing for RCB, was reported to have followed a girl in the hotel to the bedroom and tried to molest her. The incident ended in a brawl and some physical violence with the girl’s fiancée. Pomersbach was charged with several sections in the Indian Penal Code but later the case was settled outside the court between the two parties.

8.  Shahrukh Khan and the Wankhede episode, 2012: Kolkata Knight Riders (KKR) co-owner Shah Rukh Khan after a match between KKR and MI at Wankhede Stadium was allegedly involved in a brawl with the security officials at the venue. The altercation drew enormous attention and became the talk of the town. This led to an enquiry after which the MCA imposed a five years ban on the star studded actor, denying him entry to the venue for a span of five years.

9.  Spot fixing scandal, 2013: Incidents like these bring down the credibility of the game massively. In 2013, RR players Sreesanth, Ajit Chandila and Ankeet Chavan were arrested by Delhi Police on the grounds of match fixing and were reported to have connections with the bookies. The incident also highlighted the involvement of CSK owner and N Srinivasan’s son-in-law Gurunath Meiyappan and RR owner Raj Kundra in the scandal. Bollywood actor Vindoo Dara Singh was also involved in these shameful acts.

11.  Virat Kohli and Anushka Sharma, 2015: Virat Kohli breached the ACSU protocol when he met his then girlfriend Anushka Sharma when rain stopped play at Bangalore. Though the incident was not a severe one but drew massive attention on social media. 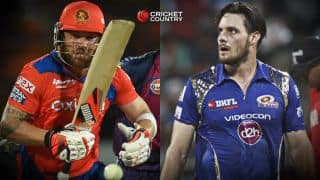