In the last couple of months, ICC has been strict with bowling actions and launched a crackdown on illegal ones, and several top players have fallen prey to it.

There’s much suspense over Sunil Narine’s role in the ongoing Indian Premier League (IPL). The West Indian, who in recent years has been defending champions’ Kolkata Knight Riders’ (KKR) main player, was reported twice in the last year’s Champions League Twenty20 (CLT20), which led to him being suspended for the final. The trouble is still not over, as the bowler who got his action cleared, was called again in KKR’s match against Sunrisers Hyderbad (SRH) last week.

In the last couple of months, ICC has been strict with bowling actions and launched a crackdown on illegal ones, and several top players have fallen prey to it.

Suvajit Mustafi looks at 13 bowlers, who were earlier banned for illegal actions and later sanctioned.

In December 1999, when Pakistan toured Australia, Akhtar was banned from bowling for a short while. He returned soon and played the tri-series in Australia, which also featured India. However his action was always a matter of controversy as it did help him generate disconcerting pace.

The England right-arm pacer was reported in 2001, when he made his One-Day International (ODI) debut. He was later suspended from bowling in October 2005 by the England and Wales Cricket Board (ECB), but was cleared in 2006.

For long, he was Bangladesh’s main bowler and it was big blow for the side, when the left-arm spinner’s action came under the scanner during the series against New Zealand. He was suspended from bowling in December 2008; however the suspension was pretty short and lifted in March 2009.

In a very short international career, he has been reported twice. He was first reported in November 2010 and banned the next month. Following a remedial work on his action, he was cleared in June 2011. He was touring in India in 2013, which was Sachin Tendulkar’s farewell series. He was reported again in November 2013 and banned the next month. Though he has returned to bowling, he isn’t allowed to bowl the doosra.

Along with Shillingford, even Samuels was also reported on the same tour in 2013. After the tests, it was concluded that he can only bowl his normal off-breaks and not the faster ones. In fact, his faster ones would even clock in the late 120s kmph.

Lot of Sri Lankan hopes rested on this mystery off-spinner, but it came as a major blow to the Lankan cricket, when Senanayake was banned from bowling in international cricket in July 2014. He changed his bowling action and went more side-on. He was cleared in December last year, ahead of Sri Lanka’s New Zealand tour, but he surely has lost the efficiency.

After Senanayake, the year 2014, saw a lot of crackdowns on bowlers with suspect action and Williamson was one. Primarily, a batsman, Williamson was banned from bowling in July 2014. He had to work on his action and remodeled it to more side-on. He was cleared in December 2014.

Ajmal’s action always raised copious doubts, especially when he bowled the doosra. He was the backbone of the Pakistani side and continued bowling them to several glories. He was reported while bowling against Sri Lanka in August 2014 and in what was a big blow to Pakistan cricket, he was banned the following next month. Spin great Saqlain Mushtaq worked on his action and he was cleared just a week before the World Cup 2015. However, it was too late and he couldn’t participate in the quadrennial showpiece. He returned to international cricket in April 2015, but hasn’t yet replicated his old magic.

In October 2014, the off-spinner’s action was found to be illegal and as a result he was banned from bowling. After conducting tests, Utseya was cleared. Strangely, it was revealed by ICC that he couldn’t bowl spin and could only bowl his slow medium deliveries which were measured within the 15-degree level of tolerance.

Off-spinners are a rarity in Bangladesh and Gazi belongs to that breed. In August 2014, Gazi was reported during a One-Dayer in West Indies and failed in two conducted tests at centres in Cardiff and Brisbane. He remodeled it and was cleared along with Ajmal, just a week before the World Cup.

Hafeez was reported during the BCCI competition Champions League Twenty20 in 2014, but that sanction did not apply in international cricket. Later in the first Test against New Zealand in November that year, he was reported again and couldn’t clear the biomechanical tests the following month. He was banned from bowling. In April 2015, following remedial work and retests, he cleared his action and can now bowl in international cricket.

Note: Narine was reported in BCCI tournament and Pragyan Ojha was banned from domestic cricket. Both returned with a remodeled action.In November 2014, the Zimbabwean all-rounder Malcolm Waller was reported during a Test in Bangladesh. A month later he was banned from bowling as ICC revealed that all of his off-spin deliveries exceeded the 15 degrees level of tolerance permitted under the regulations. Waller, continues to bowl in domestic cricket, is still awaiting clearance at the top level. 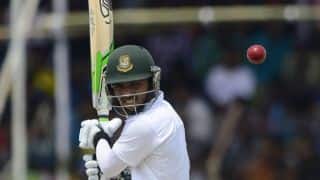 Mominul Haque: Bangladesh in good position vs Pakistan in 1st Test at Khulna