14 unsung heroes in the history of World Cup finals

14 unsung heroes in the history of World Cup finals

The names of man-of-the-match in the World Cup finals have been etched in the annals of cricket forever, but there were players who rose on the day of the mega event and contributed with gems and cameos for their side – some unselfish, some less spectacular, some in cause of a triumph and some in defeats.

The World Cup final is the grandest of stage for any cricketer. One splendid show and you are a hero for the rest of your life. The names of man-of-the-match in the World Cup finals have been etched in the annals of cricket forever, but there were players who rose on the day of the mega event and contributed with gems and cameos for their side – some unselfish, some less spectacular, some in cause of a triumph and some in defeats.

Suvajit Mustafi lists out the unsung heroes of the World Cup finals.

West Indian skipper Clive Lloyd’s 102 from 85 balls is the most talked-about performance in the match. It deservingly won him the man-of-the-match. But spare a thought for Keith Boyce. He batted No. 7 and scored a breezy 34 from 37. His runs in the end made the difference as Australia came very close to chasing it down. Later, he picked up four crucial Australian wickets for just 50 runs in his 12 overs.

The left-arm seamer had steamrolled England in the semi-final and sustained his form in the final. He picked up his second successive five-wicket haul [five for 48] — the wickets of Alvin Kallicharran, Rohan Kanhai, Viv Richards, Clive Lloyd and Deryck Murray. Later, he also tried to win it with the bat and managed 14 from 11. Gilmour was brilliant with the ball but unfortunately ended up in the losing side.

Everyone remembers Viv Richards’ unbeaten 138 and Joel Garner for running through the English side with a five-for haul, but Collis King made a huge impact with the bat that dented the confidence of English bowlers. King joined Richards at the crease with West Indies in a spot of bother at 99 for four. While Richards anchored the innings, King did the unthinkable of overshadowing the legend at the other end. The duo added a quick 139, with King scoring 86 from 66 balls — something unimaginable in the 1970s. Thanks to King’s mayhem, West Indies scored of 286, which proved too big a target for England.

The Indian opener scored 38 from 57 balls, but that was not just the top score of the Indian innings but the entire match! Srikkanth was quite fluent and his square-drive is still etched in memory.  India owe Srikkanth as much as it bowlers in winning a low-scoring final to emerge World Cup champs.

Opener David Boon, the man-of-the-match, lent stability to the innings with an innings of 75. Skipper Allan Border also did well with an innings of 31 from as many balls and then two for 38 for seven overs.  But considering Australia won by the narrow margin of seven runs Mike Veletta unbeaten 45 off just 31 balls made a huge difference in the end analysis.  However, it’s Boon’s knock and Border’s all-round show that is commonly remembered.

Yes, it was Wasim Akram’s all-round display — 33 from 18 balls and three for 49 — that swung the match in Pakistan’s favour, besides the 139-run stand between captain Imran Khan and Javed Miandad.  But it’s not easily recalled that Inzamam-ul-Haq’s blazing 42 off 35 balls made a huge difference as Pakistan won by just 22 runs.

While the English wickets kept falling like the proverbial ninepins, Fairbrother kept playing a busy innings. Had he got some support, he could have gone on to win it for the Englishmen. Fairbrother 62 from 70 balls is forgotten among the heroics of Akram, Inzamam, Imran and Miandad in Pakistan’s victory.

People remember the picture-perfect moment when Sri Lankan skipper Arjuna Ranatunga hit that late-cut to signal’s Sri Lanka’s win. People also remember Aravinda de Silva running towards his captain and hugging him after the stroke that brought up the winning runs. People also remember de Silva’s superb all-round show won him the man-of-the-match and Ranatunga’s quick 47. But when the explosive pair of Sanath Jayasuriya and Romesh Kaluwitharana failed, a man anchored the innings to perfection. But Asanka Gurusinha’s role in that high-pressure game is not easily remembered. It was he who built the innings and set the platform for the eventual win by scoring 65 runs that was worth lot more than its numerical value.

A bowler taking two wickets is hardly any cause of excitement. But in the 1999 final, McGrath bowled with robotic precision to bottle up the Pakistani line-up to end up with figures of 9-3-13-2. But the man of the match went to Shane Warne who picked up four wickets for 33 runs. But it was the brakes applied by McGrath that helped Warne capitalise on the pressure.

The match will always be remembered for Australian captain Ricky Ponting’s unbeaten 140 from just 121 balls to bat India out of the match. However, early on when Ponting struggled, it was Damien Martyn who continued ticking the score with a fluent knock. Martyn’s heroics is all the more creditable as he played with a broken finger. He added an unbeaten 234 run partnership with Ponting and ended up with a fluent 88 from 84 balls.

He played a lone hand in India’s seemingly impossible chase of 360. Sehwag 82 from 81 balls is lost in the recesses of mind, eclipsed by Ponting’s epic and Australia’s triumph.

That night in Mumbai, he might have been the saddest man. What more could he do? Jayawardene scored the only hundred of the match and still ended up in the losing side. With Sri Lanka in all sorts of bother, Jayawardene once again produced a gem, scoring an unbeaten 103 from 88 balls, as he guided Sri Lanka to a total of 274. But on this fateful, nothing was a safe total against an emotionally charged and spirited Indian side.

Indian skipper MS Dhoni won the man-of-the-match for his brisk 91 not out. He provided India the perfect moment when he ended the World Cup with a towering six. However there were two men who scored more than him and played equally important hands. Gambhir batted under crisis to add 84 runs for the third wicket with Virat Kohli and then 109 with Dhoni that took India on the threshold of victory. Gambhir played a very important role when India was in deep trouble to score 97 from 122 balls, but it was Dhoni’s 91 not out from 79 balls that overshadowed every other batting moment in the match.

Mitchell Starc was the difference maker for the Australian side in tournament. Throughout the World Cup, he bowled with fire, consistently bowling over 90 mph and difficult lengths. In the final against New Zealand, the key was to get Brendon McCullum out early. Till the final, he had hammered bowlers out of the park and had a strike rate close to 192! On the big day, a perfect yorker from Starc cleaned McCullum up for a duck. His spell at the top made the difference for Australia as they won the cup for the fifth time. He ended with a spell of 8-0-20-2.

He was one of New Zealand’s heroes in the World Cup. It was his unbeaten 84 against South Africa in the semis that saw the Kiwis through to the final. In the biggest stage of all, it was again Elliott again who put up a valiant fight. It seemed that he was playing a different bowling attack. At one end wickets fell like ninepins and at the other Elliott crafted a fine 83 from 82. In the end, what Elliott’s efforts did was only delay the Australian victory as New Zealand reached to a total of 183, a total they could fight with. 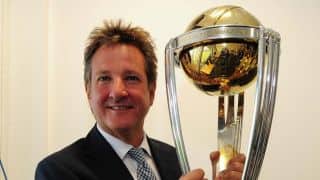