When a sportsman gets a call to play from his country while still student, he has to be special. Abbas Ali Baig was studying in Oxford when the 1959 Indian team sent a SOS to bolster their team which had already suffered losses in the first three Tests of the five-Test series against Colin Cowdrey’s Englishmen. Baig, just 20, became the first batsman in Test history to score a fourth innings hundred on debut — a feat which till date has been achieved by just seven players. Baig is one of the four players to achieve that overseas. And his innings of 112 at Old Trafford is the highest score among those seven batsmen. That he achieved it against an English attack led by Fred Trueman for a side that was lost three of the five Tests by an innings, two others by 171 runs and eight wickets shows how strong the opposition was for the Indian side. His Test career lasted just nine more Tests — the last of which was in January 1967 against the West Indies. Though he was selected for the tour of England in 1971, he did not play a Test. His Test career average of 23.77 was a huge disappointment after the dream start.

The young left-arm spinner from Delhi emerged as a callow 17-year-old, raising hopes as the next Bishan Singh Bedi. He gave the ball copious air and was dangerous on tracks conducive to spin. He had impressive figures at home and overseas against England, Sri Lankan, Pakistan and Zimbabwe.  But there was an unmistakable crisis of confidence as his career progressed. That made him experiment with his bowling actions — something dangerous to dwell into at that level of cricket. Maninder took seven wickets against Zimbabwe at Kotla in March 1993. Sadly, that was his last Test. He was just 28.

He was just 17 years and 118 days when he made his Test debut against the West Indies at Antigua in April 1983, after breaking into the Indian squad before he was 17.  He went wicketless in his 25 overs for 95 runs. It must be remembered that he was pitted against the might of West Indies at their pomp and the fact that S Venkataraghavan and Ravi Shastri, between then, conceded 255 runs for their three wickets. But in the next three innings he bowled, Siva had figures of six for 64, six for 117 and six for 99 — all against David Gower’s Englishmen in 1984. He was one of the architects of India’s victory in the World Championship of Cricket in Australia in 1985 with his arsenal of tricks as a leggie, bowled with a classical action. Siva was also a dependable bat — he scored five First-Class hundreds — and a brilliant field. Yet, after taking 18 wickets in three successive Test innings, he played just six more Tests. A tragic end to what was unquestionably a highly precocious talent whose name comprised three Indian Gods — Lord Siva, Lord Rama and Lord Krishna.

Among the lost generation of talented Indian players in the 1980s, SadanandVishwanath is another. Like Sivarmakrishnan, he was one of prominent faces of India’s victory in the 1985 World Championship of Cricket in Australia. His stumping off Siva to get rid of the great JavedMiandad remains a classic. For someone as talented as Vishwanath, just three Tests and 22 One-Day Internationals in a career spanning less than three years is shocking. The fadeout was sudden, the memories of Australia 1985 quickly forgotten.

The leg-spinner made the world take notice in his very first Test by capturing eight wickets in each innings to equal Bob Massie’s Test record for the most wickets in a Test by a debutant. That was against the West Indies in 1988 at Madras. In his very next Test, against New Zealand at Bangalore, he got six for 59 in the second innings to emerge yet again as the match-winning bowling hero for India. Hirwani continued to be among wickets by taking seven wickets at Mumbai and five wickets at Hyderabad in the following Tests against the Kiwis. His tally at this point was 36 wickets in four Tests. Yet, his career lasted just 13 more Tests. He had just one more five-for haul in Tests — six for 59 against New NewZealand at Cuttack in 1995. But within a year of that, after playing two more Tests, his career was over. He was 28.

There were quite a few in Mumbai cricket who believed he was more talented than Sachin Tendulkar in schools cricket. Kambli followed Tendulkar into the Mumbai and Indian teams. Kambli’s impact was relatively greater than Tendulkar at the start: back-to-back double Test double hundreds in his fourth and fifth Tests against England and Zimbabwe respectively, followed by overseas hundreds against Sri Lanka in his sixth and seventh Tests and an innings of 82 in his ninth Test against the same opponents at home. His Test average at this point was 97.98. But his Test career lasted just eight more Tests. Test debut in 1993, last Test in 1995. He was just 23 when he played his final Test. One of the most celebrated batting talents, Kambli’s Test career was over in a little over two years.  Sadly, the downward spiral extended to his personal life as well and a great batsman today finds himself like a pariah.

If there is one man who promised to take his place in the Indian team as a genuine all-rounder since the great KapilDev, it was IrfanPathan. Here was a player who could score a hundred and scalp 10 wickets in a match.  He was just 19 when he made his Test debut and played his last Test seven years ago when he was just 23! Pathan could swing and seam the ball prodigiously and anybody who saw him shatter Adam Gilchrist’s stump as a 19-year-old would agree that the left-arm seamer was very special talent. He also proved his worth as a batsman to move up the order — a batting average of 31.57 with one hundred and five fifties suggests that. He captured 100 Test wickets with seven for 59 as innings best and 12 for 126 as match best. But it’s what he could have achieved but did not with his enormous talent that hurts.  He is still actively playing First-Class cricket, but it seems highly improbable at present that he will make a Test comeback after such a long hiatus.

On his Test debut, as against Pakistan at Faisalabad, he emerged as the highest wicket-taker with the scalps of Shoaib Malik, Younis Khan, Mohammad Yousuf and Abdul Razzaq.  At 21, he promised a lot with his ability to swing the ball either ways. He got Younis for the second time in the Test and went on to take four more wickets in the next Test, at Karachi. In the following year, he had a very productive tour of England in which he got the dangerous Kevin Pietersen three times in successive innings. And when he toured Australia in 2008, twice he had four-fors— at Sydney and Perth. A haul of 40 wickets in the first 10 ten Test is most encouraging, especially in the Indian context. He played four more Tests without getting another wicket to see his Test career come to a screeching halt. Not yet 30, he is seen as a commentator in the ongoing Indian Premier League (IPL) where he once was the Purple Cap winner in the second edition in 2009.

(H Natarajan is a journalistic schizophrenic who oscillates between two polar opposite forms of writing —analytical and insightful on the one hand, and rib-tickling humour on the other).

More stories from this writer: 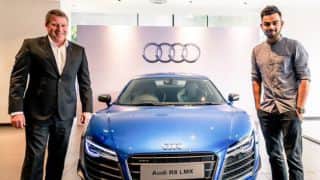