Rishab Pant is now the third highest score in the tournament with 252 runs and they have come at an average of 63 and a strike-rate of 112.

Twitter goes: ‘A pant that expensive?’ Jokes apart, the Haridwar boy seems to be the new blue eyed boy of Indian cricket. The wicketkeeper batsman of the India’s Under-19 side has been making a habit to grab headlines. On Saturday, his century against Namibia in the ICC Under-19 World Cup quarter-final helped India win by 197 runs. Follow: IPL 2016 Auction: Live updates and pick of the tweets

Pant is now the third highest score in the tournament with 252 runs and they have come at an average of 63 and a strike-rate of 112. In the previous game against Nepal, Pant smashed the fastest fifty in Under-19 World Cup.

The uncapped batsman has now been sold to the Delhi Daredevils (DD) in the 2016 Indian Premier League (IPL) Auction for a whopping Rs 1.9 crore, which is 19 times higher than the base price he set for himself. He had set himself a price of Rs 10 lakhs.

It was a super Saturday for the youngster, who is living a dream. Pant was trending on Twitter and we bring you some of the best reactions to social media.

The young sensation, Rishab Pant, fetches 1.90 crore as he is bought by the Delhi Daredevils. vivo #IPLAuction

Wowww Rishab Pant Is Sure Gonna Mark this Day As A Revolutionary Day For Him! A Century and Now 1.9CR Deal #vivoIPLauction @vivo_india — Bhavesh (@bhaveshmb3) February 6, 2016

That awkward moment when u get sold for more amount than ur team captain. #RishabPant

Good to see four Indian U-19 players are Sold,highest bid was Rishab Pant and he goes to Delhi for rs above 170L most probably.. #IPLAUCTION — Krishnendu Hazra (@ImKrishnenduH) February 6, 2016

#IPLAuction
Delhi Daredevils lose their shirt with exorbitant bids.
But not to worry, at least they have a pant.
Rishabh Pant.

Rishabh Pant has scored a fine century…well played. He should be a few crore richer tonight. #IPLAuction 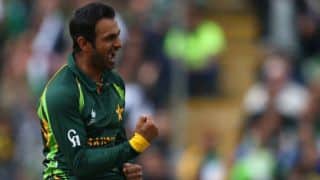